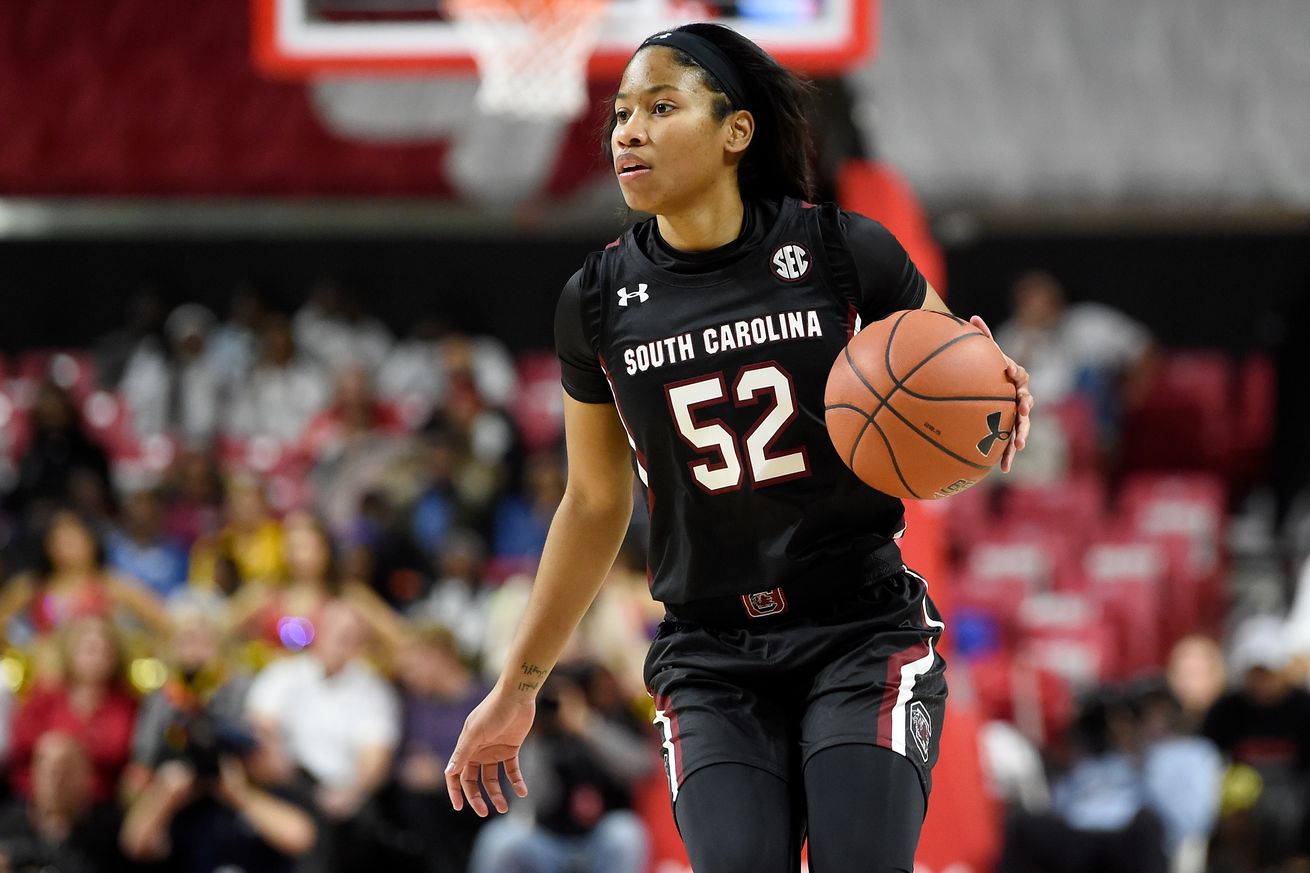 Tyasha Harris has been a steadying force for the top-ranked Gamecocks. | Photo by G Fiume/Maryland Terrapins/Getty Images

The young South Carolina Gamecocks haven’t lost since late November. While it’s their frontcourt that gets most of the accolades, it’s been their point guard, Tyasha Harris, who has been the team’s steadying force.

It’s been the Gamecocks’ non-conference play, though, that has taken the women’s basketball world by storm. After a highly impressive early-season showing that included victories over Baylor (currently ranked No. 2) and Maryland (No. 10), South Carolina recently defeated No. 5 UConn in Storrs — something that has been nearly impossible in recent years.

While the play of South Carolina’s post players has garnered the most attention — Aaliyah Boston and Mikiah Herbert Harrigan are among the most formidable frontcourt duos in the country — senior point guard Tyasha Harris has been the team’s driving force. After the Gamecocks’ victory over UConn, head coach Dawn Staley praised Harris lavishly:

“Ty was a difference-maker,” Staley said, per The Athletic’s Tamryn Spruill. “She’s a seasoned point guard that, and I’m gonna say this, if you look at the mock drafts, they don’t even have her talked about as being a first-rounder in the WNBA. You gotta be kidding me. You gotta be kidding me. So, if other people aren’t going to write the narrative I have to say it because she’s showing everybody around the country what she’s made of.”

While coaches going out of their way to praise their players isn’t exactly unheard of, Staley has a good point (no pun intended) regarding Harris: She’s certainly one of the best point guards in the country, and she makes for a solid WNBA Draft prospect. Let’s dig into why.

Harris has been a statistically productive point guard since her sophomore year, averaging at least 10 points and 5 assists per game in each season since. As a senior, she’s averaging 12.1 points and 5.5 assists, as well as 1.5 steals per game.

Harris also has a good amount of experience with USA Basketball. She won a Gold Medal with Team USA in the 2016 FIBA U18 Championship, followed by Silver Medals a year later in the FIBA U19 World Cup and Pan-American Games. Harris was honored as part of the 2017 U19 World Cup all-tournament team.

How she helps the Gamecocks

While many of the guards in the 2020 Draft class get hyped for their scoring ability (and deservedly so), Harris is more of a throwback point guard: a player who manages her team, runs its offense, and excels as a leader.

That may not sound particularly exciting, but it’s hard to argue with the Gamecocks’ success with Harris leading the way — and she has the individual numbers to back it up. She’s assisting on over 30 percent of her teammates’ baskets (per Her Hoop Stats), and rarely turns it over, putting up a terrific assist/turnover ratio of 2.62. Harris’ line against UConn, in particular, was outstanding: 19 points, 11 assists and 0 turnovers while playing the entire 40 minutes.

What might separate Harris from the point guard pack on draft day, however, is an important physical tool: her size. At 5-foot-10, she’s quite tall for her position, and she’ll be able to hold her own defensively against a much wider range of players than some of her peers.

.@TyHarris_52 buries one from downtown!

South Carolina has been getting a good amount of love on national TV this season, with one more nationally televised SEC game remaining: a March 1 matchup with the Texas A&M Aggies (ESPN2). You’ll have another opportunity to watch Harris if the Gamecocks do well in the SEC Tournament; both the semifinals (ESPNU) and finals (ESPN2) will be aired nationally.