WNBA Playoffs Round 1 Preview: It’s Sky vs. Sun and Mercury vs. Mystics in win-or-go-home doubleheader 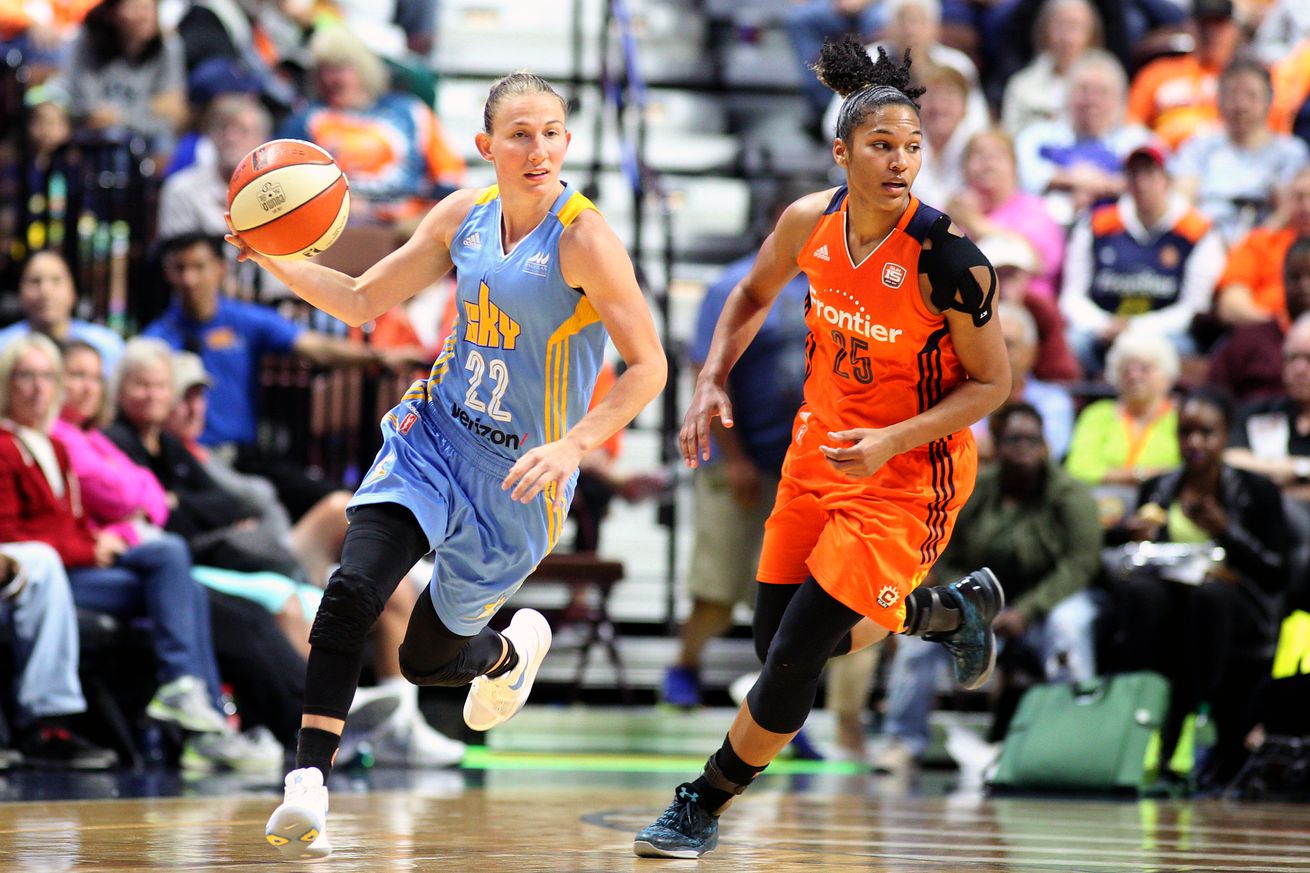 Courtney Vandersloot (left) hopes to avoid turning the ball over to Alyssa Thomas when the Sky and Sun meet in the first round of the 2020 WNBA Playoffs. | Photo by Tim Clayton/Corbis via Getty Images

The Chicago Sky are hard to stop when in a scoring flow but the Connecticut Sun are experts at interrupting an offensive flow. The Phoenix Mercury’s streaky backcourt shooters will be tested against the Washington Mystics’ dogged defense. It’s great offense versus great defense when the WNBA Playoffs tip off Tuesday night in a pair of win-or-go-home matchups.

The WNBA Playoffs have arrived and the No. 6 Connecticut Sun and No. 7 Chicago Sky will kick off the first-round doubleheader at 7 p.m. ET on Tuesday. Next, the No. 8 Washington Mystics face the No. 5 Phoenix Mercury at 9 p.m. ET.

Both games will be broadcast live on ESPN2.

The Sun started the season 0-5 before regaining some of the magic that led them to the WNBA Finals last year. In contrast, the Sky got off to a hot start and had many believing they could make a deep playoff run before struggling late in the season. The Mystics, who were hit hardest by the social justice and coronavirus opt outs, won five of their last six games to sneak into the playoffs. Lastly, the Mercury came into the season with high expectations but, oddly, have performed best after losing a few key players to injury and personal reasons.

Winners of tonight’s games will advance to the second round and face either the No. 3 Los Angeles Sparks or the No. 4 Minnesota Lynx.

Courtney Vandersloot had the best regular season of her career and averaged exactly 10 assists per game. Now she will attempt to guide the Sky in the postseason with the help of Kahleah Copper — the team’s most versatile scorer.

Connecticut is led by 6-foot-4 forward DeWanna Bonner, who had no trouble adjusting to being the best player on a WNBA team after so many years of playing with even better stars ahead of her in Phoenix. She has been complemented by point-forward Alyssa Thomas, who also has played some of the best basketball of her career this year.

Connecticut will have the best scorer on the floor in Bonner, who possesses a 3-point shot that commands respect. Her scoring prowess is the main thing the Sky have to fear but Connecticut is an inefficient shooting team, which leaves the door open for Chicago to focus on its advantages — starting with its offensive chemistry.

The Mercury were expected to be a top-4 team, at best, and compete for a championship come playoff time. The playoffs are here and they had to settle for a No. 5 seed. Diana Taurasi and Skylar Diggins-Smith have stepped up big-time, however, since the losses of Brittney Griner (personal) and Bria Hartley (injury) to give the team momentum.

Taurasi’s best scoring performance this season came against the Mystics on Aug. 23. Her veteran savvy is the biggest advantage Phoenix has and it really could make a big impact on the outcome of the contest. However, that the talent drops off after Taurasi and Diggins-Smith is a weakness of the Mercury’s offense.

Meanwhile, Myisha Hines-Allen — after playing and contributing very little in her first two WNBA seasons — is the Mystics’ leading scorer and rebounder.

With Emma Meesseman struggling to shoot the 3-ball as she did during her 2019 Finals MVP season, Washington’s weakness is its offense. But the team has become a solid defensive unit — sixth in points allowed — that can lock in and string together stops.

Key to the matchup: Chicago distributing vs. Connecticut forcing turnovers. Everyone knows that Vandersloot is the best point guard in the game, but Connecticut forces 15 turnovers per contest, good for third the league, and its best defender, Alyssa Thomas, leads the WNBA with two steals per game.

Key to the matchup: Ariel Atkins. The third-year sharpshooter needs to return to having the quick trigger she had in the 2019 playoffs because she is the best 3-point and midrange shooter on the Mystics. She has deferred to Hines-Allen a lot lately but led the way with 26 points in Washington’s playoff-clinching win over Atlanta on Sunday and her contributions could make the difference against Phoenix.

Highlights: Atkins’ 3-point shooting was a key part of the Mystics’ 2019 championship run