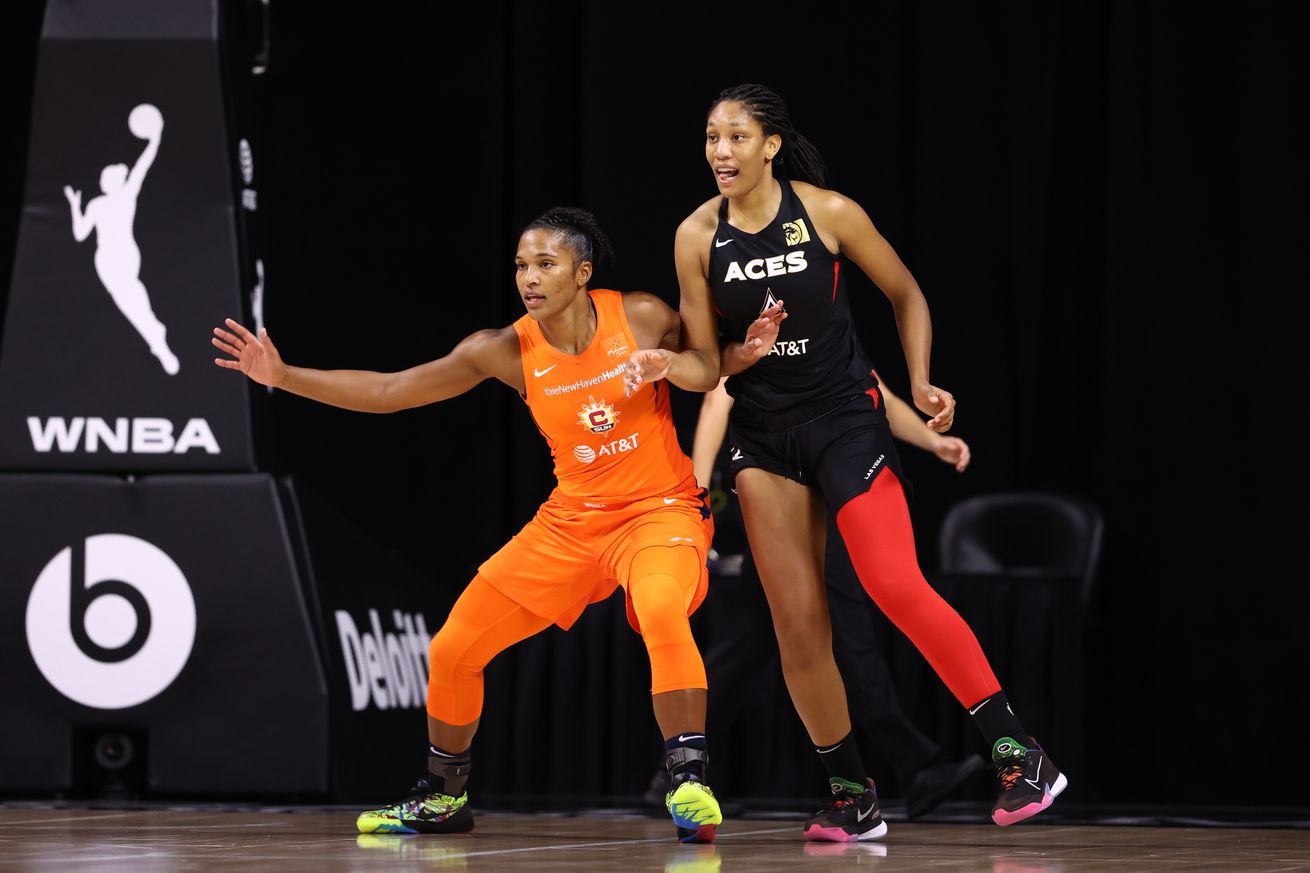 Two of the most physical forwards in the game — Connecticut’s Alyssa Thomas and Las Vegas’ A’ja Wilson — will clash in the 2020 WNBA Semifinals. | Photo by Ned Dishman/NBAE via Getty Images

The WNBA Semifinals are here and they bring a pair of intriguing matchups in a best-of-five format. The underdog Connecticut Sun take on the top-seeded Las Vegas Aces in what should be a physical matchup, while the Minnesota Lynx will try to solve the puzzle that is the Seattle Storm machine.

After exciting first and second rounds, the 2020 WNBA playoffs continue this Sunday with the start of the semifinals. Unlike the previous single-game elimination rounds, the semifinals will be played in a best-of-five format, consistent with how the WNBA has operated since 2016.

The two best teams in the 2020 regular season, the Las Vegas Aces and Seattle Storm, await, both having earned a two-round bye thanks to their position as the top two seeds. Las Vegas will face the surging Connecticut Sun, who entered the postseason as the seventh overall seed but defeated the Chicago Sky and Los Angeles Sparks in impressive fashion in the first two rounds. The Storm, meanwhile, will take on the fourth-seeded Minnesota Lynx, who squeaked past the Phoenix Mercury in the second round after getting a bye in the first.

Both series will be featured on national TV, with games set to be televised on both ESPN and ESPN2, as well as ABC. Currently, only the first three games of each series are scheduled, with times and networks to be determined if more games are necessary.

The Sun are a bit of an improbable story. While the 2019 runners-up probably fall short of a “Cinderella” moniker, it would be understandable if their tumultuous offseason and 0-5 start to 2020 left you with a bit of doubt regarding their chances to get back to the WNBA Finals.

Nevertheless, the Sun overcame that slow start and early depth concerns to peak at the right time. The team’s 10-12 regular-season record means little at this point; after 13- and 14-point victories over Chicago and Los Angeles, respectively, Connecticut is once again forging ahead with a workmanlike, underdog mentality, affectionately dubbed “DISRESPECT.”

Don’t expect that to stop anytime soon. Standing in the Connecticut’s way is a Las Vegas team that earned the No. 1 overall seed in the twilight of the regular season. After star forward A’ja Wilson was named league MVP on Thursday, the Aces are surely more confident than ever and they’re well-rested, too. Sunday will mark exactly a week since they last took the court. This could be a significant advantage for Las Vegas.

Then again, it’s the postseason and Connecticut’s Alyssa Thomas has a way of shrugging off heavy workloads when the stakes are the highest. Her performance in 2019’s postseason was the stuff of legend: 16 points, 9.3 rebounds, 6.6 assists and 2.4 steals per game in 37 minutes per contest, with several games featuring her for the entire 40. The Sun will no doubt be leaning on Thomas’ durability once again as they fight for the upset.

The regular-season series between Connecticut and Las Vegas was one-sided in favor of Vegas. The Aces defeated the Sun 99-78 in mid-August, then won by double-digits again two weeks later. Wilson was magnificent in the series, shooting a combined 18-of-26 from the field and scoring 45 points, but it was big performances from Kayla McBride, Dearica Hamby and Jackie Young that put the Aces over the top.

The high scores of those games indicate a problem for Connecticut — a team that has relied on defense to win its games. The Aces want to get out and run — they led the WNBA in pace this season — and with a 46.9 percent effective field goal percentage, the Sun do not have the firepower to get into a shootout. They’ll need to load up on Wilson and try to make these games stingy half court battles to avoid a repeat of those regular-season results.

The fourth-seeded Lynx played like a top-four team for most of the regular season, and, although their second-round victory over the Mercury was a bit too close for comfort, all that matters in a single-elimination round is a win and they got it.

Cheryl Reeve’s team will now face its toughest test yet and one it has yet to solve in 2020: the No. 2 seed Storm. Seattle entered the 2020 season as one of the favorites to win the title and though the No. 1 overall seed ultimately slipped through its fingers, the extended period of dominance it showed in the regular season did little to dispel the notion that it is the team to beat.

With Breanna Stewart, Natasha Howard, Sue Bird and Jewell Loyd, the Storm boast a blend of length, athleticism and skill that, on paper, is unmatched. Factor Swiss-army knife forward Alysha Clark and a deep bench into the equation and you have all the makings of a championship team — especially in a season in which most other contenders are missing significant pieces.

Seattle hasn’t been invincible, however. It dropped both games to Las Vegas in the regular season and the health of Bird and Stewart has been a worry for weeks now. While the duo has played up to par while on the court, both players have missed time down the stretch due to nagging injuries.

Storm fans hope that was precautionary. Lynx fans hope it’s a sign of weakness. Minnesota recently got center Sylvia Fowles back from a calf injury after she missed much of the regular season; if she remains good to go while Seattle remains limited, it could help turn a mismatch on paper into a much more evenly-matched series.

Just like the Sun and Aces’ regular-season series, recent history strongly favors the higher-seeded team here. Seattle dominated Minnesota 90-66 in late July and won comfortably again in their second meeting — a game in which Fowles did not play.

Minnesota does have the talent to make this series interesting though, and it goes well beyond Fowles. Second-year forward Napheesa Collier has been excellent all season long, averaging 16.1 points and nine rebounds per game while scoring the ball on a highly efficient 60.5 true shooting percentage. Meanwhile, point guard Crystal Dangerfield took home Rookie of the Year honors as the 2020 WNBA Draft’s No. 16 overall pick. She provided an unusually steady hand for a rookie in such a position and gave the Lynx the boost they needed before Odyssey Sims came back from pregnancy. The Lynx will need all these players to be consistent and at their best if they’re going to overcome the Storm’s waves of talent.