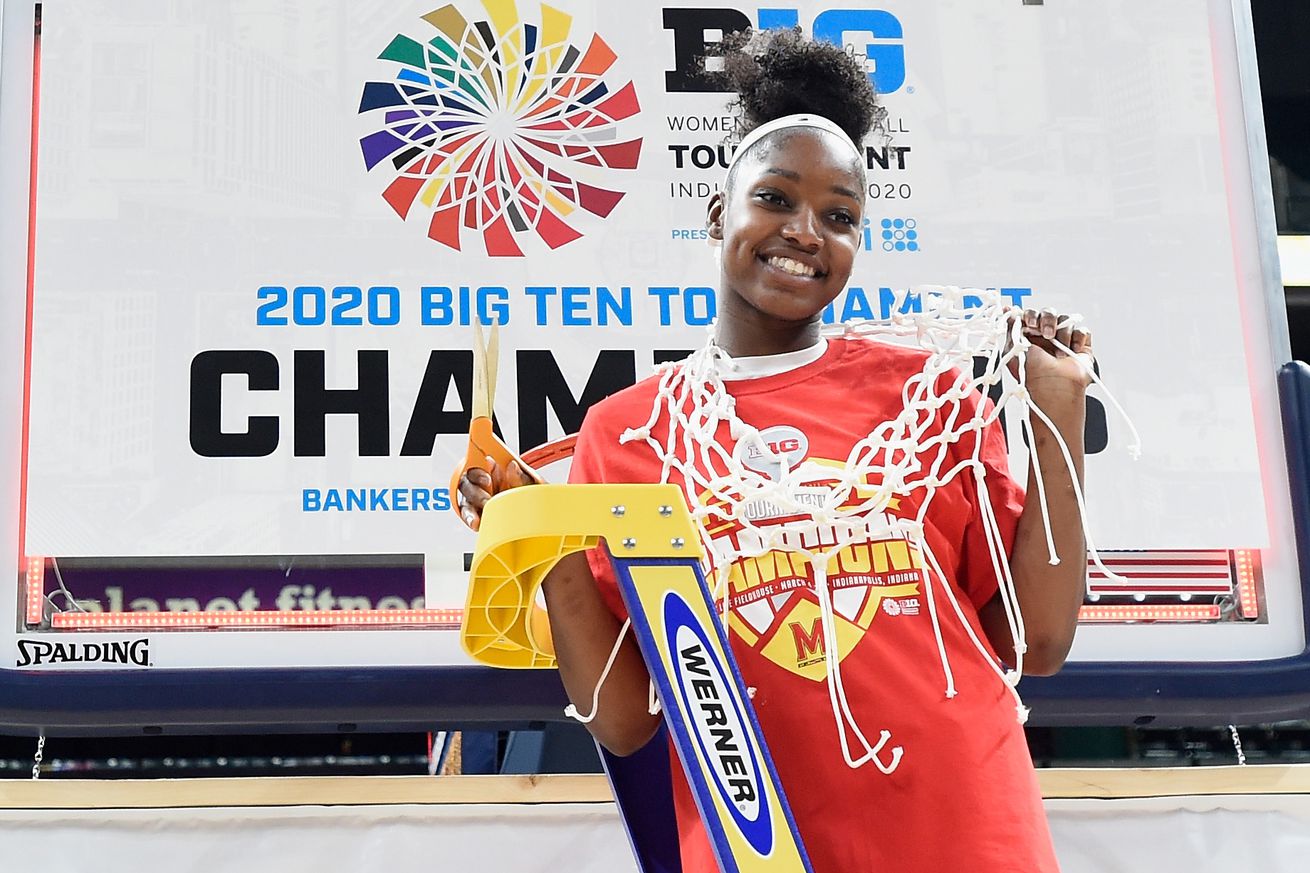 Kaila Charles is a rare second-round pick in the 2020 draft to make an opening-day roster. | Photo by G Fiume/Maryland Terrapins/Getty Images

The WNBA’s 12 teams have whittled their rosters to the league-required maximum of 12 players. In a league abounding with talent and no training camp for the draftees to prove their pro-ready mettle, only 16 of the 36 women selected in this year’s draft made the cut. But this isn’t exactly new for the ultra-competitive WNBA.

The defending champion Washington Mystics announced on Sunday their decision to waive Jaylen Agnew and Alecia “Sug” Sutton in pursuit of the May 26 roster finalization deadline by which the WNBA’s 12 teams must whittle their rosters to a maximum 12 players.

Additionally for Agnew, Sutton, Erica Ogwumike (26th overall pick), who was waived on Sunday by the Minnesota Lynx, the roster-cut deadline is especially painful this year. Due to stay-at-home orders and social distancing guidelines stemming from the coronavirus pandemic, they and the 33 other selections in the 2020 WNBA Draft did not benefit from the opportunity to earn a roster spot through team training camps.

The result: A lot elite players who didn’t make an opening-day roster.

The painful cuts cannot be blamed solely on the absence of training camps this year. With just 144 total roster spots available, competition is fierce every year, and increasingly so in recent times. The talent emerging from the collegiate ranks has never had more depth and Sue Bird and Diana Taurasi, both closer in age to 40 than 35, are redefining the term “career longevity,” with other veteran players also sporting proud membership to that club.

Without the benefit of training camp, the 2020 WNBA Draft picks didn’t have a chance to prove their pro-ready mettle and, therefore, didn’t stand much of a chance to make a team.

Kaila Charles, selected 23rd overall, made the Connecticut Sun roster, and she is a second-round rarity for doing so. Players above her and below her on the draft board — those selected by teams rich in veteran, future Hall of Fame talent and players in their prime — didn’t fare so well.

The top-17 draft picks — No. 1 Sabrina Ionescu (New York Liberty) through No. 17 Brittany Brewer (Atlanta Dream) — were safe. But No. 18 Te’a Cooper, who’d captained Baylor toward an NCAA Tournament title defense, was cut by the Phoenix Mercury who proceeded to forego the services its other draft pick — Rider Broncs star Stella Johnson, who was selected 29th overall.

Also not making the cut from the draft’s second round are No. 19 Joyner Holmes (Texas/cut by Seattle Storm), No. 20 Beatrice Mompremier (Miami/cut by Los Angeles Sparks), No. 21. Luisa Geiselsöder (Germany/cut by Dallas Wings) and Agnew.

And the 2020 season gets zero representation from the draft’s third round — from No. 25 Michaela Pivec of Oregon State, who elected to sit this season with hopes of competing for a roster spot with the Dream in 2021, to No. 36 Sutton. Between Pivec and Sutton are collegiate standouts such as No. 30 Japreece Dean (UCLA/cut by Chicago Sky), No. 31 Haley Gorecki (Duke/cut by Storm, No. 32 Kiah Gillespie (Florida State/cut by Sky) and No. 35 Juicy Landrum (Baylor/cut by Sun).

Cierra Dillard — a star at Buffalo who was drafted 20th overall in 2019 — was waived by the Lynx and Sparks prior to the start of the 2019 season. With no roster spot open to her, she went on to play professionally in Spain and, like many others, still seeks a turn in the WNBA. In an interview last year, Dillard suggested the league allow teams to “… have an extended roster through, maybe June 15.”

Allowing 15 women on each roster, for example, even if for a temporarily extended period, would give more of the elite athletes vying for WNBA glory opportunities to succeed. Additionally, coaches and general managers would have more material and time with which to assess players and make decisions.

The roughly 144 women who made the cut:

Out for season: Stephanie Mavunga (knee rehab/not yet confirmed by team).

Out for season: Maria Vadeeva (overseas, with plans to rejoin team in 2021), Leonie Fiebich (overseas).

Out for season: Kitija Laksa (overseas).

This is a developing story. Updates will be provided as new information becomes available.