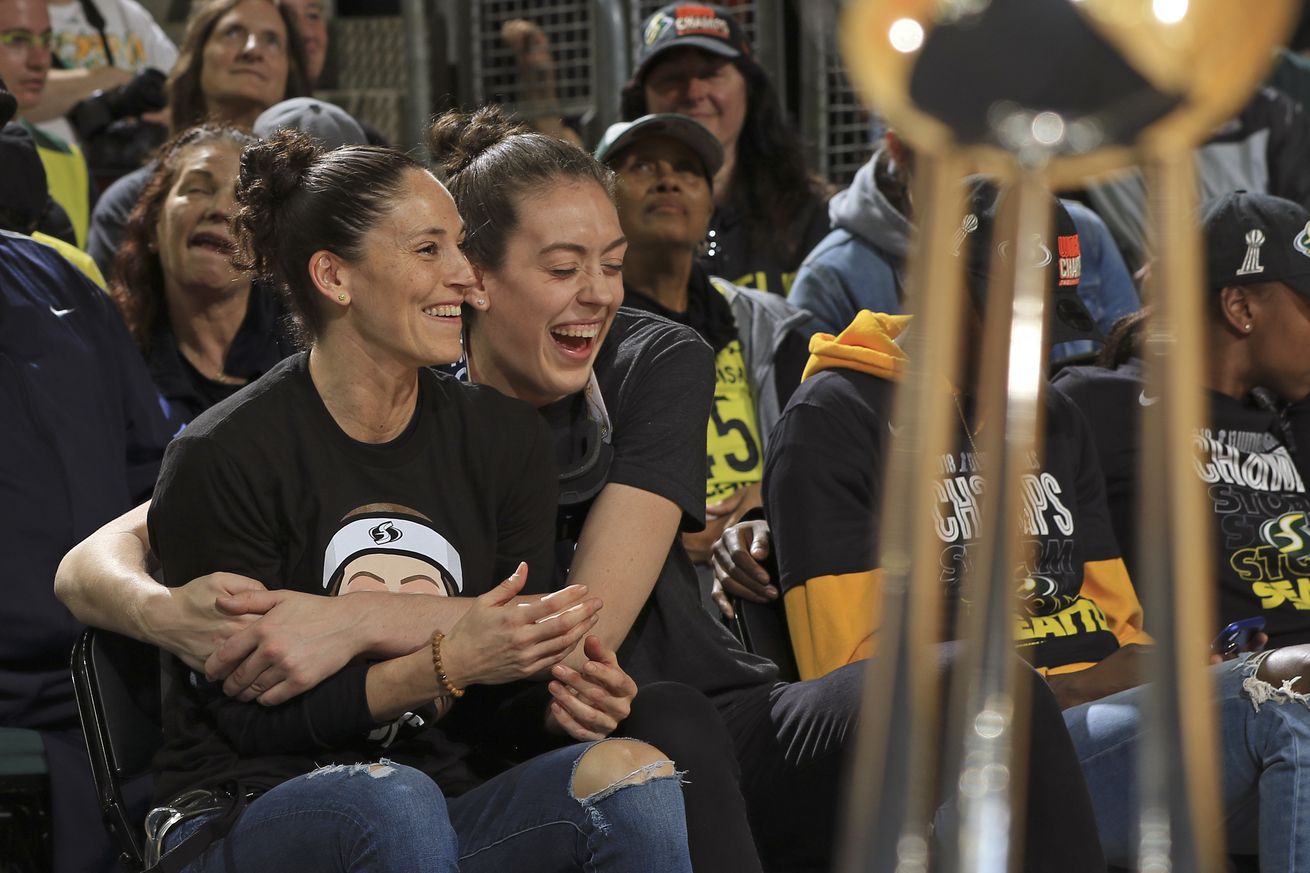 Amid all the player movement, Sue Bird and Breanna Stewart are expected to remain the Seattle Storm’s on-court power couple in 2020. | Photo by Joshua Huston/NBAE via Getty Images

Like Valentine’s Day, the WNBA free agency signing period inspires declarations of love, with teams trying to earn the affections of free agents and trade targets. Here are the songs that describe the dreams of the WNBA’s 12 teams.

It seems fitting that the first week of the WNBA’s free agency signing period coincides with Valentine’s Day.

Valentine’s Day and free agency invite opportunities for professions of love, with a cascade of attention and affection directed to the most desirable crushes.

In the WNBA, the likes of Angel McCoughtry and DeWanna Bonner enjoyed the entreaties of multiple suitors, while Skylar Diggins-Smith also attracted longing looks.

Whether redoubling their commitment to a steady standby, reuniting with an old flame or spicing things up with someone new, WNBA teams hope these relationships are consummated with a championship. Thus, in the holiday spirit, here are the songs that best capture WNBA teams’ amorous, on-court ambitions.

Yes, in trading for Kalani Brown the Atlanta Dream got their “Brown-Eyed Girl.”

Courtney and Allie in the Sky with Diamond?

The Chicago Sky must make sure Courtney Vandersloot and Allie Quigley realize how good they look playing next to Diamond DeShields in their Sky uniforms.

A few weeks ago, Nelly rocked a Jonquel Jones All-Star jersey when he performed at Mohegan Sun Area. The Connecticut Sun expressed their desire to “ride wit” Jones, kicking off the free agency signing period by showing the Bahamian Beast the money.

By trading for DeWanna Bonner, it got “hot in herre”, with “herre” being Uncasville, Conn.

While Natisha Hiedeman will return, the constraints of the salary cap could pose a “dilemma” for the Sun because unrestricted free agents Courtney Williams and Shekinna Stricklen remain unsigned. If Connecticut wants to “cruise” back to the Finals, they especially will need the services of South Georgia’s finest: Williams.

After Skylar Diggins-Smith announced, “I want it that way,” the Dallas Wings agreed to say “bye, bye, bye” to Sky. However, Dallas declared, “I want you back,” to Isabelle Harrison, Moriah Jefferson, Imani McGee-Stafford, Karlie Samuelson and Megan Gustafson.

Dallas also added Astou Ndour via a trade with the Chicago Sky, and collected a trio of draft picks from the Phoenix Mercury in exchange for Diggins-Smith. Having the fifth and seventh picks in the 2020 WNBA Draft — and future first-round pick, along with their own No. 2 pick in the 2020 draft — is akin to encountering a “genie in a bottle.” If things go the “right way” for the Wings, watch out! This could be a stacked and seductive young team.

During her first offseason in charge of the Indiana Fever, general manager Tamika Catchings has thus far shown no urgency to make changes, only matching the restricted free agent offer sheet Tiffany Mitchell received from the Atlanta Dream. In short, her ambitions remain “unwritten.”

However, if Catchings decides to “release her inhibitions” and reveal her intentions, she retains enviable options. An intriguing collection of assets — the No. 3 pick in the 2020 WNBA Draft, young players like Teaira McCowan and Kelsey Mitchell and veteran Candice Dupree — gives Catchings the flexibility to make bold or marginal moves to improve the roster.

The Las Vegas Aces got “[their] Angel, [their] darling” by signing unrestricted free agent Angel McCoughtry.

Yet, if the Aces want a “Full House” of former top draft picks on the court of Mandalay Bay, they need to extend to Liz Cambage “a heart, a hand to hold onto.” Make sure Cambage, who remains unsigned as an unrestricted free agent, remembers that “there’s a face of somebody who needs you.” Without Liz Vegas, the Aces’ evermore star-studded experiment is suddenly less intimidating. So Liz, the lights of Sin City are “waiting to carry you home.”

Although the return of Tierra Ruffin-Pratt and the addition of Brittney Sykes strengthen the Los Angeles Sparks, reminding Kristi Toliver, “You belong with me,” was L.A.’s biggest move.

The Sparks also must express their appreciation and affection for her backcourt partner, Chelsea Gray — “standing at [her] backdoor” to guarantee she knows that she belongs in the City of Angels, too.

Lindsay Whalen’s retirement last season and the sabbatical of Maya Moore, plus the uncertainty that once surrounded Rebekkah Brunson, required Minnesota Lynx head coach and general manager Cheryl Reeve to creatively assemble a new roster. Napheesa Collier, the sixth overall pick in the 2019 WNBA Draft, arrived as a Cinderella-like figure that allowed Reeve to “put it all together.”

This season, the continued absence of Moore and the rumored pregnancy of Odyssey Sims again will demand that Reeve “drive it home with one headlight.” Even though the Lynx have yet to make any free agency moves, trust that Reeve will make something work.

In 2019, the New York Liberty struggled to settle on a starting point guard. In 2020, they should have two starting-quality floor generals. The Liberty signed veteran Layshia Clarendon on the first day of the free agency signing period and, after getting some long-awaited lottery luck, presumably will add triple-double sensation Sabrina Ionescu with the No. 1 pick in the 2020 WNBA Draft.

With Clarendon and Ionescu joining a team with a new owner in Joseph Tsai, a new home in Barclays Center and a “genius” new coach in Walt Hopkins — not to mention two Jordan Brand sponsored teammates in Kia Nurse and Asia Durr — Liberty fans, finally, can celebrate the glamour of their team.

The Phoenix Mercury must be soaring over their acquisition of Skylar Diggins-Smith. Rumblings about Tina Charles also making her way to the Valley of Sun would raise the Mercury’s title expectations even higher.

While the Seattle Storm undoubtedly are excited to add another former UConn Husky in Morgan Tuck, ensuring the returns of their two Husky superstars — Sue Bird and Breanna Stewart — is the Storm’s utmost interest.

The Storm plan to confirm that Bird is “still the one” — and Stewie, too.

Things are official with Stewie and she is “working her way back” to the W “with a burning love inside.”

Even as he allowed Kristi Toliver to head back to L.A., Washington Mystics head coach and general manager Mike Thibault convinced reigning MVP (and Disney super fan) Elena Delle Donne that she has “never had a friend” like him.

Delle Donne re-signed in D.C. for another four-years. As long as 2019 Finals MVP Emma Meesseman and the increasingly-integral Aerial Powers also remain with the Mystics, Washington can aspire to “a whole new world” of WNBA excellence. New addition Leilani Mitchell should serve as “shining, shimmering, splendid” sharpshooting sixth woman.