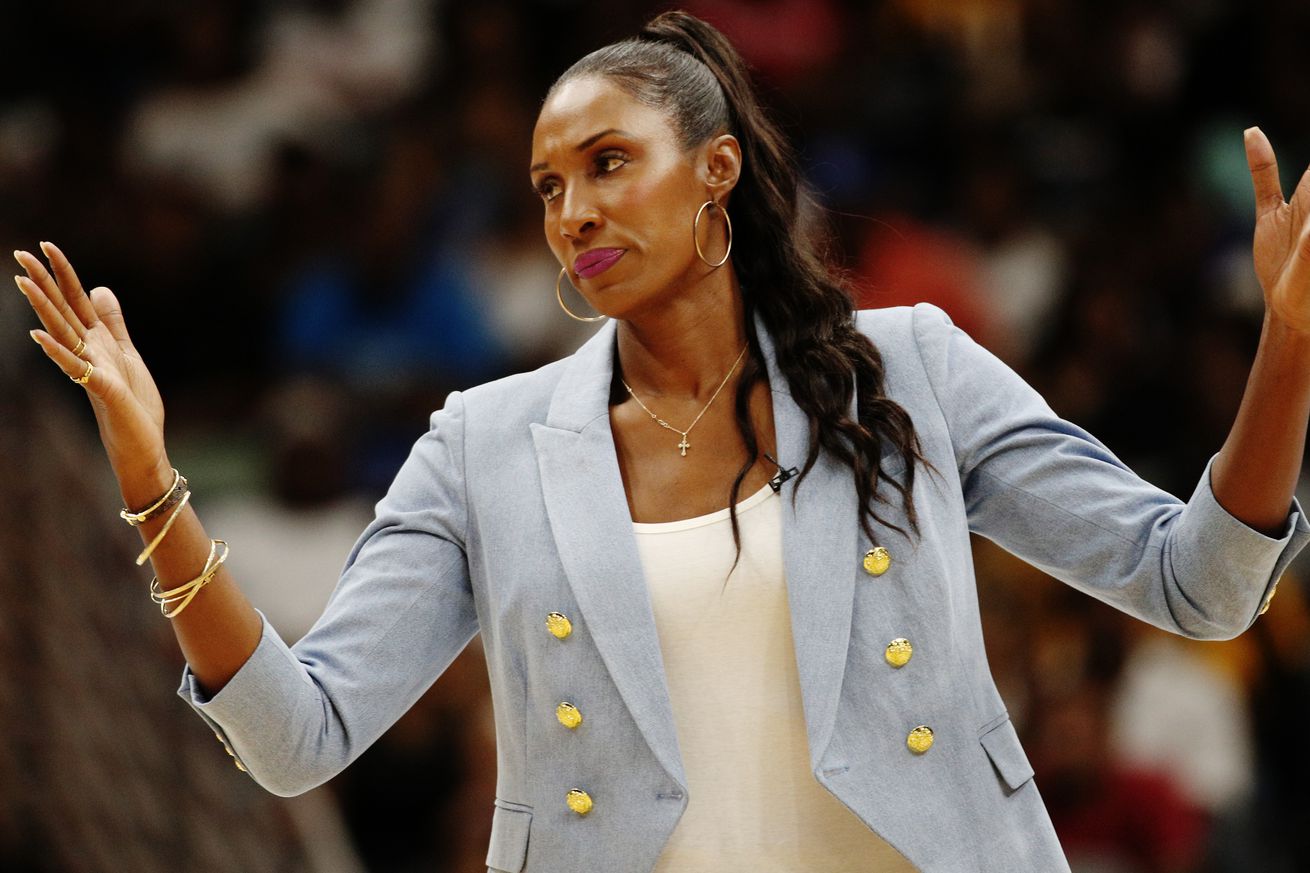 While it would be awesome to see Lisa Leslie jump from the BIG3 to the WNBA, the history of former women’s basketball stars coaching in the WNBA suggests she has no incentive to make this leap. | Photo by Chris Graythen/BIG3 via Getty Images

As Skylar Diggins-Smith said, “We need more WNBA legends coaching in the W!” Here’s why she is right, who’s already doing it right, and why the time for change is right now.

Soon after it was announced that Walt Hopkins would serve as the new head coach of the New York Liberty, Skylar Diggins-Smith fired off the following tweet:

Yes, Sky Digg we do.

It would awesome to see Tina Thompson or Lisa Leslie stalking the sidelines of a WNBA game with intensity and elegance. Or, what about Dawn Staley bringing her championship mentality (as well as her dog, Champ) to the WNBA?

These women — those who were most responsible for making the WNBA the WNBA — need to be more actively involved in the league as coaches and executives.

The WNBA is a league that is organized around the principle of meritocracy, meaning the best players, as well as the best coaches and best executives, most deserve the opportunities. However, as illustrated by the hiring of Walt Hopkins, determining who is best is not exactly an objective practice. Furthermore, the WNBA also is a cultural product that must penetrate an ever-crowded cultural landscape. By hiring WNBA legends as coaches and executives, the league can remain on an upwards trajectory as it enters the 2020s.

Under the still-new leadership of commissioner Cathy Engelbert, the WNBA has committed to “making way” for the diversity of the women hoopers who make the league up, highlighting their individual, multi-dimensional personalities and passions. They are celebrated for being athletes and for being more than athletes.

The “groundbreaking” new CBA reflects this ethos of women’s empowerment, as well as the cultural purchase of this ideology. When speaking to The Athletic, Engelbert expressed the wider symbolism of the CBA:

There is no doubt that we are going to benefit from this women’s empowerment movement, where women are getting more roles on boards and in the C-suite. We at the WNBA want to be leaders and role models around that.

Engelbert and WNBPA executive committee president Nneka Ogwumike also have emphasized that the CBA is player-centric. Engelbert described the negotiations as driven by a “player-first agenda,” while Ogwumike praised Engelbert for this “perspective.”

But what about former players?

It would seem that WNBA legends occupying visible leadership positions within the league would prove further that the WNBA is an institution of women’s empowerment. The league and the players’ association appear to have identified this as a future goal — the new CBA includes a Diversity in Coaching Initiative, outlining:

The WNBA will work with its affiliated leagues, teams and sponsors to provide off-season job opportunities designed to prepare players for their post-playing careers and will advance diversity in coaching initiatives for veteran players interested in coaching careers.

The provision situates current players, such as Kristi Toliver, to use their standing as WNBA players to get paid fairly as they work to build a broader basketball resume, preparing them to earn a job as a coach or executive soon after retirement.

The material, symbolic significance of WNBA legends in leadership roles

In a recent interview with The Athletic, Catchings discussed the material importance of having former players in decision-making capacities. Catchings said:

But once a player, I think the benefit for me is being able to have that experience as a player, to be able to try and shift the mindset from a front-office side. Now, I want to be the best GM and (look at) some of the things from the players’ (perspective). What are some of the highs and lows and things that I can do better to be the best to help our players? And that’s my job. I want (the Fever) to be the best franchise in the WNBA and our goal is to focus on players and having a player-first mentality.

Catchings also noted, “Quality of life has been something that we’ve all wanted from both sides, just making sure that we’re taking care of our players.”

As Catchings’ statements indicate, coaches or general managers who are former players will be sensitive to the needs of players. Having former players in positions of power will ensure the provisions of the new CBA are actualized to their fullest extent.

Former players not only can help to guarantee that current players are empowered but, as noted above, they also can serve as examples of empowerment.

In bringing Katie Smith back to Minnesota, Lynx head coach and general manager Cheryl Reeve has introduced this public relations potential. During media availability after announcing that Smith had been hired as an assistant coach, Reeve announced:

The day she was released from New York, I called her up and was like, ‘I know you’ve got a lot to process right now, but you have a home here in Minnesota. You have a spot,’ because she’s good, not because I felt bad for her. Not because she played in Minnesota. Because I think she’s good.

Yet, Smith’s connection to Minnesota, like Catchings’ to Indiana, is important. They are familiar figures that fans can identify with, inspiring a greater emotional investment in the team. While active players should serve as the primary faces of the WNBA, former players also can advertise what the WNBA stands for, highlighting how it has been and continues to be built by women who have devoted themselves to growing the women’s game.

In Minnesota, Rebekkah Brunson’s transition from the court to sidelines also exemplifies this. The longtime Lynx, who is retiring after the effects of a concussion from the 2018 season lingered, already has modeled the multidimensional talent of WNBA legends. She owns a food truck, Sweet Gypsy Waffles, and analyzes the Timberwolves for Fox Sports North, in addition to being a mom. Now, Brunson will serve as a development coach for post players and scout for the Lynx. Plenette Pierson’s continued presence on the Lynx staff further situates Cheryl Reeve’s team to demonstrate player-to-coach representational power.

Reeve has been successful at bringing former players into her coaching ranks because it has been a priority for her to do so. She discusses her commitment to hiring diversity with her contemporaries, like USA Basketball Women’s National Team head coach Dawn Staley who, according to The Athletic’s Tamryn Spruill, says Reeve asks her for the names of former players who might be interested in coaching. As Staley put it, Reeve is building up a “Rolodex” of names.

Former NBA players have been understood to be figures deserving authority and, in turn, opportunities that have exceeded their resumes. Their WNBA counterparts, meanwhile, have received no such grace.

It would be encouraging if the Los Angeles Sparks, still without a general manager after a messy end to the 2019 season, brought in a former Spark, such as Lisa Leslie, the best coach in the BIG3, DeLisha Milton-Jones, an assistant coach at Syracuse or even the recently-retired Alana Beard.

What about the uninspiring coaching records of WNBA legends?

Of course, one may protest, noting the rather unimpressive records of WNBA legends turned WNBA coaches.

On Smith’s time in New York, Reeve noted, “I think [she] kind of got a raw deal there. Those stormy waters that you go through only make you stronger, only make you appreciate what you have here.” While often hired as saviors, most former players have lacked the support needed to succeed. Little evidence of success then translates into ever-shrinking, even shorter opportunities.

This situation contrasts with the coaching fates of former NBA players. NBA players possess coaching prestige that permits them to continually earn opportunities in the NBA and WNBA.

Upon their retirements, Jason Kidd and Derek Fisher almost immediately were seen as desirable coaching candidates because of their prowess as point guards during their playing days. After a season at the helm of the Brooklyn Nets, Kidd finagled his way to the Milwaukee Bucks, where he failed to maximize the generational talents of Giannis Antetokounmpo during his nearly four-year tenure. Kidd, nevertheless, now is an assistant coach for the Los Angeles Lakers. Fisher, similarly, floundered during his season and a half with the New York Knicks but his record did not dissuade the Los Angeles Sparks from hiring him as the latest former NBA player of note to be welcomed into the WNBA.

While Bill Laimbeer has succeeded in multiple stops, most NBA players have not found noteworthy coaching success in the league. Yet, throughout the WNBA’s 23-year history, teams repeatedly have turned to former NBA players rather than their former WNBA counterparts. This suggests these men have been understood to be figures deserving authority and, in turn, opportunities that have exceeded their resumes. Their WNBA counterparts, meanwhile, have received no such grace.

The WNBA must recognize what its legends represent

A coach or an executive is hired for reasons that extend beyond their proven record of wins and losses. The persons selected for these positions are chosen for what they represent, or what they are believed to represent. This was the case with Walt Hopkins, whose identity signals a brand of analytical, innovative basketball thinking.

Notably, the NBA appears to have recognized recently that women, including current and former WNBA players, carry cultural capital. NBA teams have chosen to tap into the ideas of empowerment and equality that these women can communicate.

The WNBA should see its former players in the same way. Former players deserve the benefit of the doubt, not a quick, convenient dismissal. Just like their male counterparts, they have earned the right to receive multiple opportunities.

Choosing to see former players — which often means choosing to see women of color — as worthy of authority can catalyze the change the WNBA, through the new CBA, seeks to create. In her great The Players’ Tribune essay, Ogwumike declared that a new CBA was “about the kind of world we want to live in.” Women, especially women of color, in positions of authority, both in basketball and beyond, must be part of this world.

We come together because conversation is important and learning from the journey of another woman who is in a male-dominated space could be game-changing for an up-and-coming professional, for someone who’s in the business who may be facing some unique challenges … And hearing and sharing those stories is going to ignite something in someone, or it’s going to push another woman possibly to get into the field, which will create diversity, which will create more success when women are in those positions.

To go back to Diggins-Smith’s tweet: This is why “we need more legends coaching in the W!”

Yet, for all the advantages that WNBA legends could bring to the league they helped create, would coaching in the WNBA be to their advantage? Should Staley sacrifice her status as South Carolina royalty to be a WNBA maybe?

In the next edition of “WNBA Coaching Chronicles,” we’ll explore the prestige (and pay) gap that exists between the WNBA and NCAA.