WNBA to resume play after protest, day of reflection 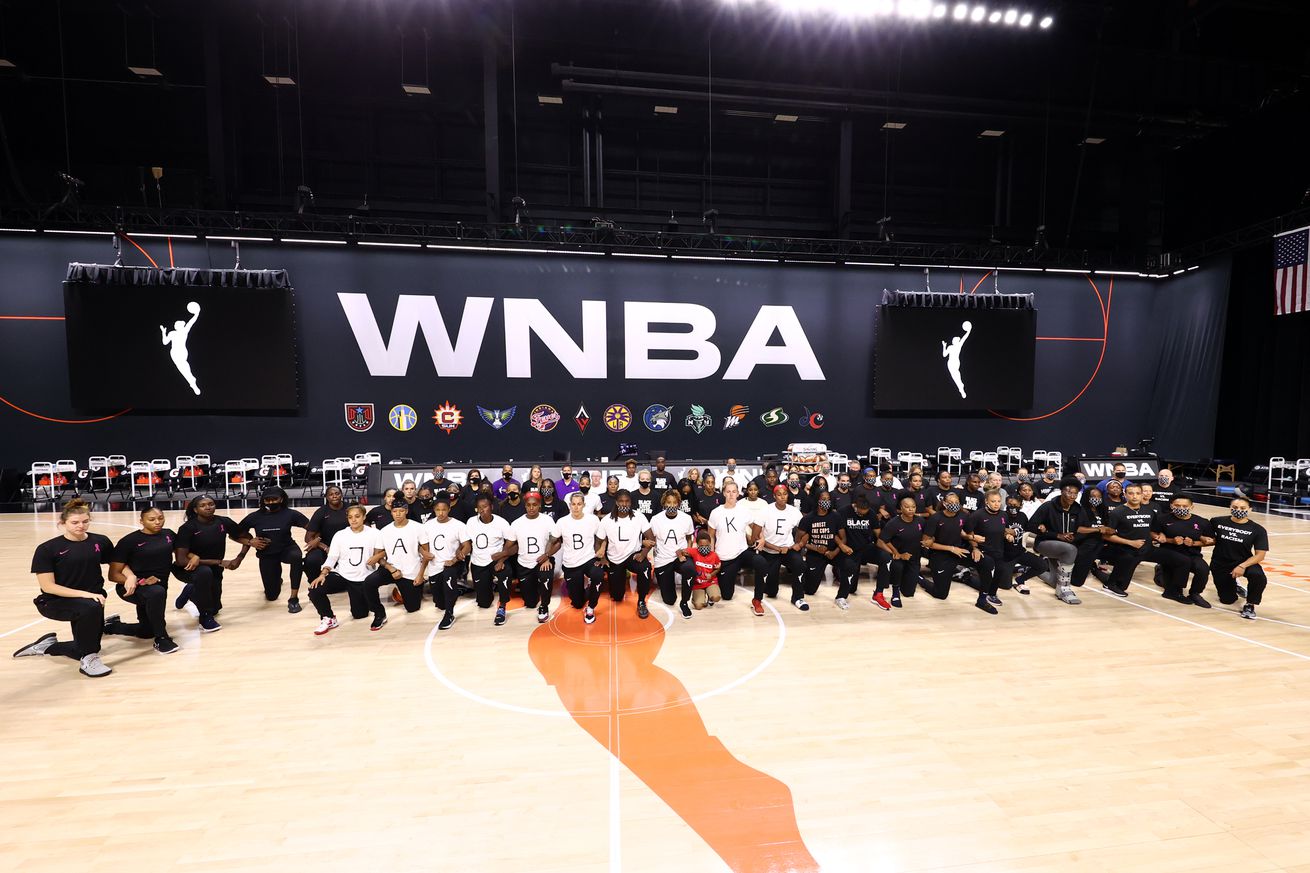 The WNBA’s two-day hiatus was spurred by the Washington Mystics, who wore t-shirts honoring Jacob Blake. | Photo by Ned Dishman/NBAE via Getty Images

After two days of protest, discussion and reflection, the WNBA will be back in action Friday night. The league’s players had been sitting out to draw attention to police brutality.

Two days after the WNBA temporarily halted play to draw attention to police brutality, the league will resume play this Friday. WNBA players ultimately decided not to play on Wednesday and Thursday in the wake of the shooting of Jacob Blake by police officers in Kenosha, WI.

The initial decision to sit out came on Wednesday afternoon when the Washington Mystics, wearing t-shirts spelling out Blake’s name on the front with seven bullet holes on the back, made the call not to play. Other WNBA teams slated to play that day quickly made the same decision, with four teams — the Mystics, Atlanta Dream, Los Angeles Sparks and Minnesota Lynx — taking a knee at center court before leaving the arena.

“We’re not just basketball players. We’re so much more than that.”

Ariel Atkins with a powerful statement on the unified decision to not play tonight. #BlackLivesMatter pic.twitter.com/Eg96KMqsFh

Thursday’s games were also postponed, with WNBPA Executive Committee President Nneka Ogwumike calling it “a day of reflection.” Ogwumike and fellow Executive Committee members Layshia Clarendon, Sue Bird, Elizabeth Williams and Natalie Achonwa each made powerful statements on the WNBA’s role in fighting for social justice as the ESPN broadcast panned across the league’s players — wearing t-shirts that read “Arrest the cops who killed Breonna Taylor”.”

Now, after the WNBA’s day of reflection, the league will resume play. It’s not yet certain when the postponed games will be made up; Friday’s games will be played as originally scheduled, starting with the Lynx taking on the Dream. The Sparks and Sun will follow, with the Mystics and Mercury concluding the day’s slate of games.

Keys to the matchup: The Dream are expecting rookie guard Chennedy Carter back for this one, which is huge for their offense. Carter’s net differential of 11.7 is highest among players and is a huge indicator of just how badly the Dream — who had lost 10 straight games prior to last Sunday’s victory over Minnesota — need her dynamic play. The Lynx, meanwhile, will be looking for revenge after a poor second-half performance did them in the last time they played the Dream. They’ll continue to be without the services of center Sylvia Fowles, who remains sidelined with a calf injury.

Keys to the matchup: The last time these two teams met, the Sun got a superhuman performance from DeWanna Bonner (34 points, 14 rebounds and 6 assists) but still fell to the Sparks. Bonner has cooled off since then, but the Sun are in much better shape now after starting the season 0-5. The Sparks, however, will remain a tough opponent; Los Angeles currently sits at 10-3 and in third place in the standings. Connecticut will have to find a way to offset the Sparks’ excellent frontcourt combination of Ogwumike and Candace Parker — perhaps with its own duo of Bonner and Alyssa Thomas — and keep up with the Sparks’ transition game to pull off the upset.

Keys to the matchup: While the Mercury are still fighting for playoff positioning without center Brittney Griner, who has left Bradenton for personal reasons, the Mystics have essentially punted on 2020 and are looking towards next season. The difference in approaches was on full display in their last matchup, which the Mercury won 88-87 behind 34 points from Diana Taurasi. Expect Taurasi to continue to get her shots up while the Mystics keep trotting out young players like Stella Johnson, Sug Sutton and Kiara Leslie.