WNBA: Top 10 players primed to continue their rise as stars 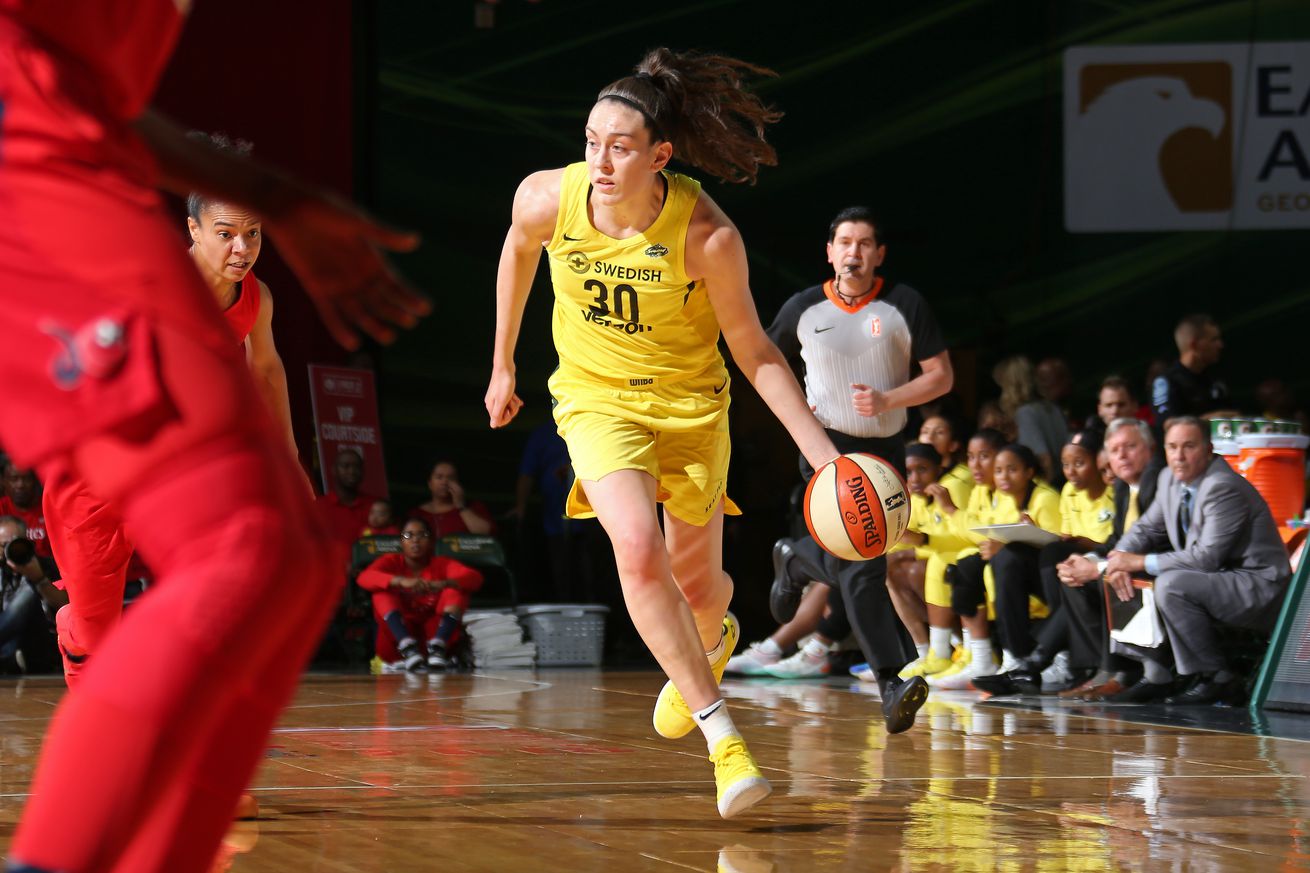 Breanna Stewart (with ball) is one of many young stars looking to improve in 2020. | Photo by Ned Dishman/NBAE via Getty Images

In addition to our top 10 under-the-radar list, we made one for the top 10 WNBA stars who have the most potential to become even better. As voted on by the Swish Appeal staff, here’s our list, which features eight former All-Stars but none who have received that honor more than three times.

Stewart is arguably the best player in the WNBA right now, up there with reigning MVP Elena Delle Donne. The 2016 No. 1 overall pick missed all of 2019 with a torn Achilles and her return is highly anticipated. She saw some action with Team USA during the 2019-20 college tour and looked good.

Stewart averaged 20.0 points, 8.8 rebounds and 1.6 blocks per game over the course of the three WNBA seasons she was active for. Her 3-point shooting was at its best in her MVP season of 2018 (41.5 percent with 61 makes). Look for Stewart to bounce back and compete for a second MVP award.

Wilson, the No. 1 pick in the 2018 draft, left her mark on the league as a rookie with 20.7 points, 8.0 rebounds and 1.7 blocks. Her numbers dipped a bit in her second season after the Aces added another frontcourt star in Liz Cambage. Nevertheless, Wilson was second to only Elena Delle Donne in All-Star votes for 2019, making her a team captain.

Numbers aside, Wilson is 23 years old and poised to become a better overall player over the next few years. She is a great inside scorer and complements Cambage well. Look for the two-time All-Star to lead the Aces to bigger and better things after their semifinals appearance last year.

Jones made her second All-Star Game last year, with the first coming in her second season (2017). The 2018 season was a down year for her, but she is expected to maintain her stardom this time around. Her 32-point, 18-rebound performance in Connecticut’s WNBA Finals Game 2 win demonstrated her ability to step up in big moments.

At age 26 and with the all-around offensive game that she possesses, the sky is the limit for Jones. She’s a do-it-all forward like Breanna Stewart and Elena Delle Donne who can step out and make threes. She also has a one-inch height advantage over Delle Donne and averaged two blocks per game last year.

DeShields is now one of the “Big Three” in Chicago alongside Allie Quigley and Courtney Vandersloot. She is well on her way to becoming the best member of that trio and one of the best players in the league. DeShields led the Sky in scoring last year with 16.2 points per game and hauled in 5.5 rebounds, which led the team’s backcourt. Known for her athleticism, DeShields would energize any offense with her all-around game and ability to get out in transition. She won the 2019 WNBA All-Star Skills Challenge and was the All-Star Game’s high scorer out of players who played under 17 minutes. She had 13 points, five rebounds and four assists in her All-Star debut.

Thomas’ 2019 season was highlighted by her monster effort on the losing side of the WNBA Finals. Her scoring (18.4 points per game), rebounding (9.2 boards), distributing (7.6 assists) and defending (2.2 steals) in that series were phenomenal and she continued her individual momentum overseas. She still has torn labra in her shoulders, but has been playing the best basketball of her career in spite of that. The Sun lost key pieces in Courtney Williams and Shekinna Stricklen, but added a new star in DeWanna Bonner. Thomas, Jonquel Jones and Bonner will be the “Big Three” in Uncasville and Thomas, who is 28 years old, is set to continue the hot streak she ignited last year.

Gray has made the last three All-Star games and scored between 14 and 15 points per game in all three seasons. Where she really improved in 2019 was in the distributing department, averaging 5.9 assists — up 0.8 from 2018 and trailing only Courtney Vandersloot for the most in the league. Now known as the “Point Gawd,” a nickname given to her by Candace Parker, Gray is poised to become a superstar on the same level that Parker was in her prime. She’s come a long way from being the No. 11 overall pick in 2014.

Ogunbowale was one of the greatest clutch players in college basketball history at Notre Dame and led all WNBA rookies in scoring last year. She was also the only player besides Napheesa Collier to receive votes for the Rookie of the Year award, which Collier won 29 votes to 14. Ogunbowale could be on her way to becoming the best scorer in the league and should make her first All-Star Game appearance this year.

Ogwumike has made the All-Star Game twice, but had an off-year last year, her first playing alongside her sister Nneka in LA. At some point, the 28-year-old is going to return to the star she was as a rookie, when she averaged 15.5 points and 8.5 rebounds per game for the Sun. The numbers might not rise all the way back to those heights right away, but with Candace Parker aging, Ogwumike should see more playing time than the 21.8 minutes she averaged in 2019. She was sixth on the team in playing time and there was a pretty big gap between her and No. 5 (Tierra Ruffin-Pratt, 25.2).

Howard won Most Improved Player in 2018 and brought her scoring average up 4.9 points higher to 18.1 in 2019. Last year she also hauled in a career-high 8.2 boards (5.5 defensive) to go along with 2.2 steals and 1.7 blocks per game en route to being named Defensive Player of the Year. She was first in the league in total steals and third in blocks. Howard made it to her first All-Star Game in 2019 and was an All-WNBA First Team selection. Her scoring may decrease with Breanna Stewart back, but she is still in her prime at age 28.

Cloud, now famous for guaranteeing and delivering on a WNBA Finals Game 5 victory for the Mystics, was third in the league in assists per game last year with 5.6 and averaged 6.2 in the playoffs. She also upped her scoring average and 3-point percentage in the postseason to 13.1 and 37.8, respectively. Her regular-season points, minutes played and assists all marked career highs, with the assist average being a whole point higher than her previous best.

A lot of Cloud’s value comes in the form of intangibles and endurance — she was fourth in the league with 1,093 minutes played during the 2019 regular season. Look for her to become an even better team leader in 2020.