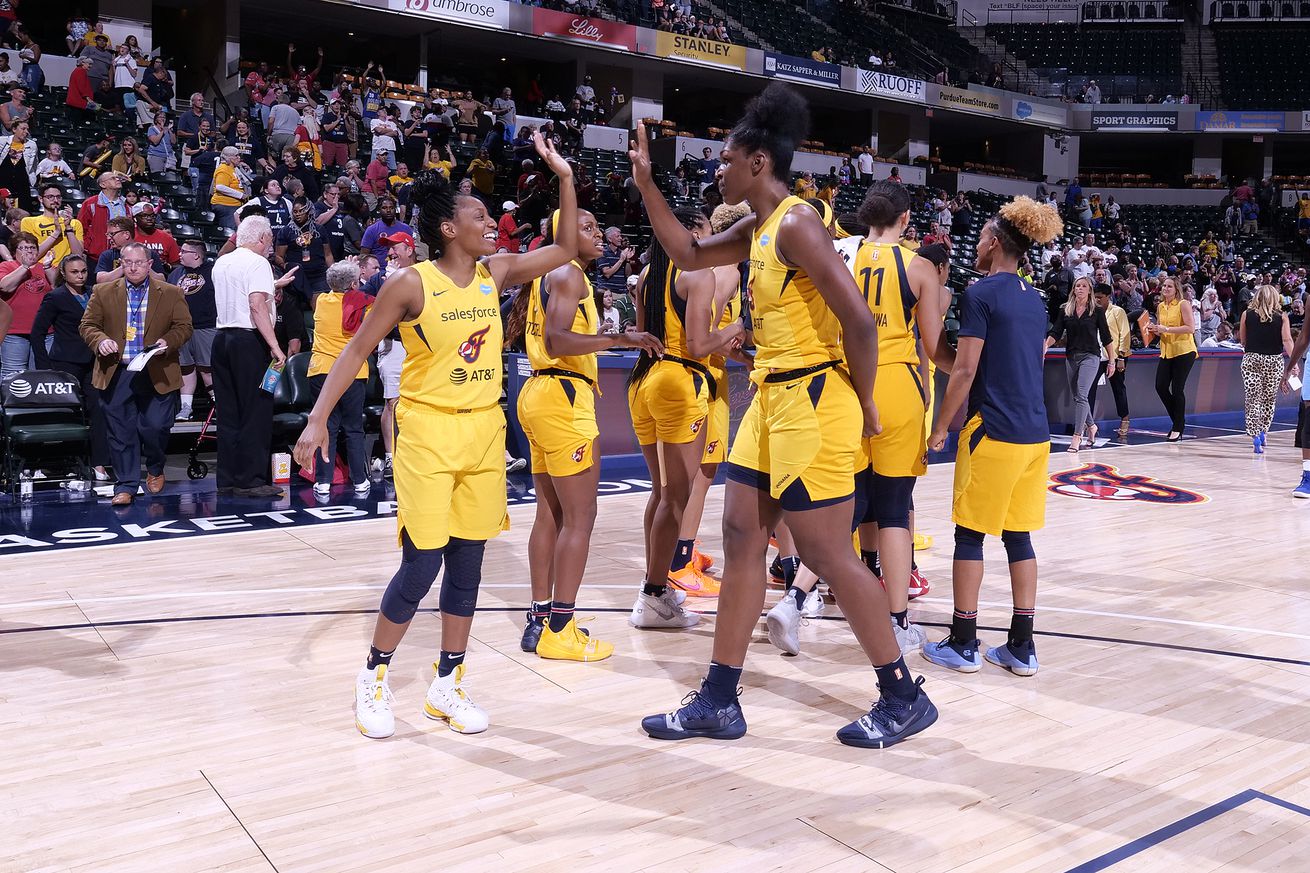 Teaira McCowan (front right) and Kelsey Mitchell (front left) made the top two spots on our list of up-and-coming players to watch this season. | Photo by Ron Hoskins/NBAE via Getty Images

Teaira McCowan and Kelsey Mitchell of the Indiana Fever both have star potential, making the Fever a team to keey your eye on entering the 2020 WNBA season. Kelsey Plum of the Las Vegas Aces, Azurá Stevens of the Chicago Sky and a third Fever player in Victoria Vivians are players to watch as well.

Wondering which WNBA players might become household names in 2020? At Swish Appeal we voted as a staff and came up with 10 players to keep an eye on. All 10 of them are seeking their first All-Star Game bid.

McCowan nearly averaged a double-double (10 points and nine rebounds) as rookie, which was impressive. But if her college career is any indication, she could be posting 20 and 20 games in the future. The 6-foot-7 center out of Mississippi State is going to be even more dangerous this year with No. 3 overall pick Lauren Cox drawing some of the defensive attention away from her in the frontcourt.

Mitchell is a gifted scorer and has all the tools to become a star. She was drafted at No. 2 overall in 2018 and has averaged 12.7 and 13.6 points per game in her first two WNBA seasons, respectively. She is poised to now become Indiana’s co-star beside McCowan and could make her first All-Star Game appearance.

Plum was a member of one of the best starting lineups in the league last year in Vegas. In a backcourt featuring 2019’s No. 1 overall pick Jackie Young and sharpshooter Kayla McBride, Plum still managed to contribute in a variety of ways. Her 3-point shooting dropped from 43.9 in 2018 to 36.0 percent, but she is perfectly capable of raising that percentage back above 40. She still has a lot of room to grow as a 25-year-old entering her fourth year and has the ability to be the best player on the team on any given night.

Stevens was the No. 6 pick in the 2018 draft and played her first two seasons with the Dallas Wings. She averaged 8.9 points and 4.6 rebounds as a rookie, but a foot injury sidelined her for most of 2019. The Sky picked up Ruthy Hebard in the 2020 draft to add depth to a frontcourt featuring Stefanie Dolson, Jantel Lavender and Cheyenne Parker. Stevens is the tallest player of the group and the 24-year-old is only going to improve.

Vivians started 26 games for the Fever as a rookie in 2018 before tearing her ACL overseas. She missed the entire 2019 season and will be hungry for more success now that she is returning. Fever point guard Erica Wheeler and guard/forward Betnijah Laney both had breakout seasons last year, but Vivians should still get a lot of playing time after the impressive stats she put up as a rookie.

At 26 years old, Sykes is in her prime, and is due for another big season like her rookie campaign in 2017 (13.9 points per game). Her scoring average in 2019 (her third season with the Atlanta Dream) was 10.2 — not bad either. Now that she’ll be playing in LA with a top-notch point guard in Chelsea Gray, she will continue to be a scoring threat and will likely be the youngest impact player on the team.

Hartley has been consistent throughout her career with the Washington Mystics and New York Liberty, but has yet to average double-figure scoring. With her career-best scoring rate coming in at 9.8 last year, 2020 could be her breakout year. She will be playing alongside a great distributor in Skylar Diggins-Smith in her first year with Phoenix.

Atkins is quietly one of the best players on a Mystics team that is loaded with talent. She can hit 3-pointers and has a good all-around game, including the defensive skills to average 1.4 steals through two years in the league. With Kristi Toliver gone and her replacement Leilani Mitchell aging, Atkins should have an even bigger role to play in Washington in 2020.

Williams, the fourth pick in the 2018 draft, saw her numbers decline slightly from her rookie year in 2019. She also went from being a starter to coming off the bench and averaged seven fewer minutes per game. She will be determined to improve upon her second season. And with a lot of young talent around her in Chicago, she won’t be the only one poised to have a breakout season and will be able to feed off the positive energy of others.

Brown played off-ball for much of 2019 with Odyssey Sims and Danielle Robinson running the point and became a great 3-point threat off the bench, shooting 38.5 percent with 52 makes. Last year was a breakout season for her — she went from averaging 1.7 points as a rookie for the Connecticut Sun to recording 7.6 points per contest. Now she is poised to become even better. She’s already a fan favorite in Minnesota and will be a key player for the Lynx.