Black women who built the WNBA belong in it — on sidelines as head coaches, in front offices as execs 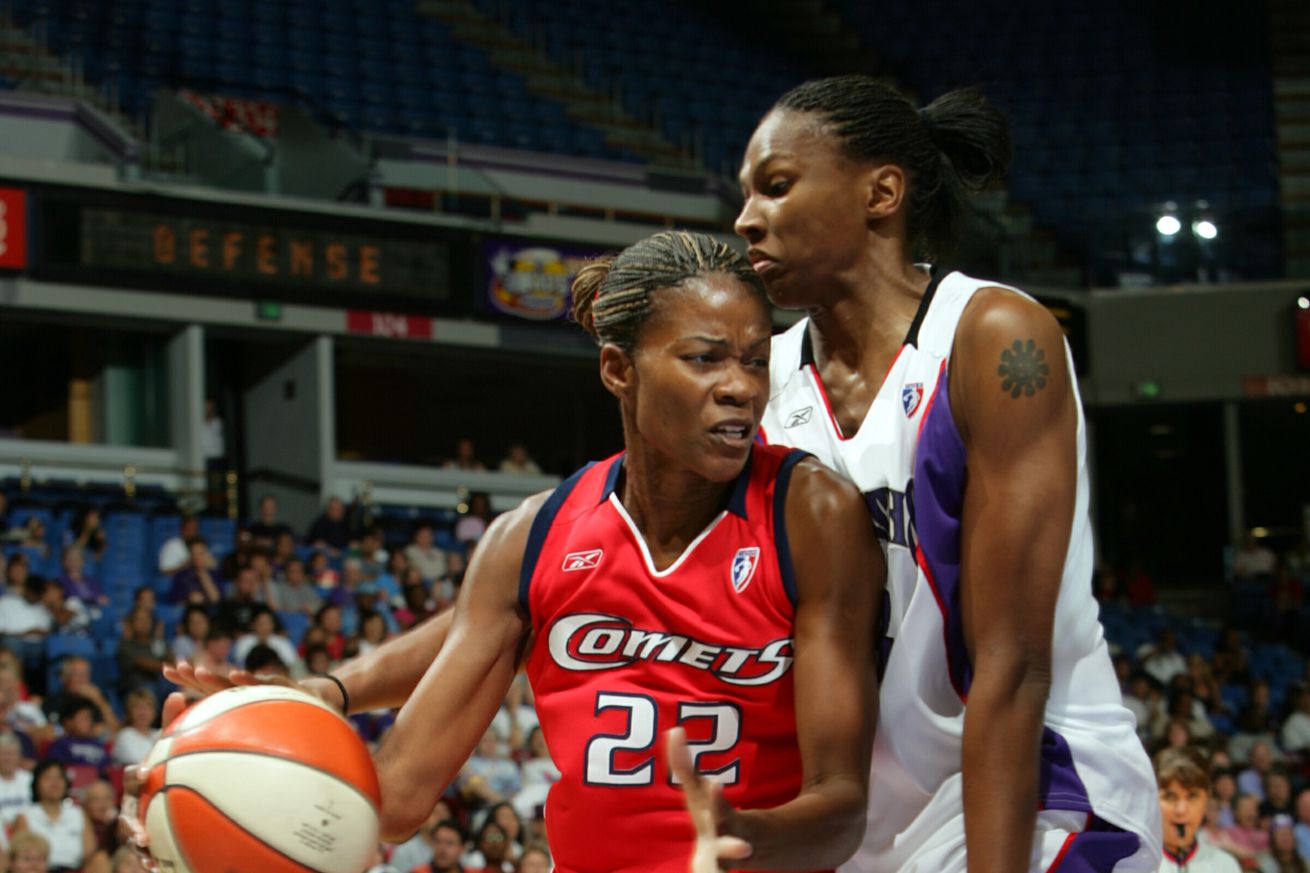 The WNBA was built by the Black women who played the game. Yet, when it comes to hiring head coaches or filling front office openings, these women often are overlooked. Could things be changing? Here are more than 10 retired players who deserve a shot at leadership positions in the league.

In 1997, the WNBA’s inaugural season, seven of eight of head coaches were women.

One — Phoenix Mercury head coach Cheryl Miller — was a woman of color.

In anticipation of the 2021 WNBA season, the league’s 25th, only four of the current 11 head coaches are women and none are women of color, even though Black women make up more than 80 percent of the league.

The WNBA presents itself as a progressive institution, but this trajectory is the opposite of progress and WNBA players, the source of the WNBA’s progressivism, are pushing to reverse this dismal demographic trend.

These candidates should be recruited and have their names at the top of the list of any and all open head coach and front office positions in the @WNBA.

The WNBPA, the league’s players’ union, not only insists that those who lead WNBA organizations resemble the women on the court, it is calling for former players to receive full consideration for leadership positions.

In short, the women who helped build this league belong in it.

In the NBA, former players have rather easily ascended to head-coaching positions, despite lacking a traditional resume. The Brooklyn Nets recently hired Steve Nash, two-time MVP with the Phoenix Suns, as head coach, in spite of his absence of coaching experience. In 2014, the New York Knicks plucked current Los Angeles Sparks’ head coach Derek Fisher right from the player ranks and made him their head coach. In 2013, the Nets tapped the then-recently-retired Jason Kidd, now an assistant with the Los Angeles Lakers, to be their head coach.

In recent years, former WNBA players have not been given this kind of benefit of the doubt when it comes to coaching opportunities.

Could the Dallas Wings hire a former player as head coach?

Last week, the Dallas Wings parted ways with head coach Brian Agler, presenting an opportunity for the Wings organization to act on the WNPBA’s demands, modeling, to quote WNBPA president Nneka Ogwumike, “the kind of world we want to live in.”

On the team’s impending search, Wings president and CEO Greg Bibb initially suggested, “At the end of the day we’ll hire the candidate that’s best qualified to lead our team. As far as relatability, the best way is to find a coach who has walked in the same shoes that the players have walked in.”

This comment, in combination with the fact that Bibb decided to move on from Agler — the stereotype of a conventionally-qualified basketball coach — indicates that the Wings organization may be willing to re-envision what “best qualified to lead our team” means.

These women have been deemed “qualified” to serve as assistants coaches. Why not as head coaches?

In sports and other spheres, women of color long have been relegated to “help” roles. Recognizing the persistence of such misguided, damaging assumptions is a necessary first step to seeing Black women as qualified leaders, both on the basketball court and beyond.

With that in mind, former Black WNBA players who only had one or two head coaching shots also are worthy of a second look because, unlike male coaches, especially those who never played the game, they are not granted repeated opportunities to prove their worth. These women include Cynthia Cooper, Teresa Edwards, Jennifer Gillom, and Taj McWilliams-Franklin.

Several former WNBA players of color also hold different positions within NBA organizations. In New Orleans, Swin Cash works in the front office, while Teresa Weatherspoon serves as a player development coach for the Pelicans. Lindsey Harding is an assistant coach with the Sacramento Kings. And, in the BIG3, Lisa Leslie showed off her coaching chops, taking her team to the title in 2019, her first season as head coach.

Yet, this list of women is only the tip of the iceberg. To reiterate, women of color built this league. The wider WNBA family is filled with retired players who should be seen as qualified to lead teams.

Here are 10 former WNBA players of color who deserve consideration for current and future head coaching and front office positions.

When Alana Beard retired after the 2019 season, she left as one of the most intelligent defenders and best conditioned players to ever play in the WNBA. As her 14-year career with the Washington Mystics and Los Angeles Sparks began to wind down, Beard sharpened her leadership skills by participating in Harvard Business School’s Crossover Into Business Program and partnered with Marissa Coleman to open a Mellow Mushroom in Virginia. Since retiring, she has worked as a women’s college basketball commentator for ACC Network.

Vicky Bullet was a WNBA original, debuting for the Charlotte Sting in 1997. After three seasons with the Sting, including an All-Star campaign in 1999, she spent her final three seasons in the W with the Washington Mystics. A few years after she retired from playing overseas in 2007, she began her coaching career, first serving as an assistant coach for the Mystics in 2009. In 2011, she became an assistant coach at Hagerstown Community College; a year later she was elevated to head coach. Since 2016, the West Virginia native has served as head coach at West Virginia Wesleyan.

After two season playing in the ABL, Yolanda Griffith jumped to the WNBA in 1999. She not only became the face of the Sacramento Monarchs but also instantly established herself as one of the best players in the league, winning the 1999 WNBA MVP Award. Griffith would then compile an illustrious 11-year WNBA career. In 2009, she embarked a peripatetic assistant coaching career, starting with a position with the Indiana Fever, the final WNBA team she played for. In 2011, she began a two-year stint as an assistant at Boston College. From there, she worked one season at Lafayette, three seasons at Massachusetts and two seasons at Albany. In 2018, Griffith joined the staff at Boston College, where she remains entering the 2020-21 season.

Over the course of her four-year college and six-year professional playing career, Alexis Hornbuckle suited up for some of the most successful coaches in the history of women’s basketball — Pat Summitt, Bill Laimbeer and Cheryl Reeve. Hornbuckle also was a winner. She was part of two national title-winning teams at the University of Tennessee before capturing her first WNBA championship with the Detroit Shock in 2008 and a second with the Minnesota Lynx in 2011. Since the conclusion of her playing career, Hornbuckle has devoted herself to the development of girls’ basketball in North Carolina. In addition to founding the North Carolina Reign, a Charlotte-based girls’ basketball program, she has established her own eponymous youth basketball training program, passing on her knowledge to the next generation through clinics, camps and webinars.

Edwige Lawson-Wade is not just the wife of Chicago Sky head coach James Wade. She currently is the director of basketball operations for the French professional team BLMA. During her playing days, she had an extended and accomplished career with the French National Team, helping them secure the silver medal at the 2012 London Olympics. In addition to a nearly-twenty-year career playing overseas, primarily in France and Russia, she spent five seasons in the WNBA, serving as the back-up point guard for the San Antonio Silver Stars for three seasons.

A Woman of Troy great, Pam McGee raised two basketball standouts — hooper, activist and aspiring lawyer Imani McGee-Stafford and three-time NBA champion JaVale McGee. She also has trained other young basketball talents as head coach for Sacramento High and NorCalPreps. Due the fortunes, or misfortunes, of timing, McGee spent only two seasons in the WNBA, one for the Sacramento Monarchs and one for the Los Angeles Sparks. After graduating from USC in 1984, she played for the Dallas Diamonds, alongside her sister Paula and Nancy Lieberman, in the very short-lived Women’s American Basketball Association (WABA).

Following a fantastic career at the University of Florida, Murriel Page was the third pick in the 1998 WNBA Draft. She played 11 solid seasons in the league, the first eight with the Washington Mystics and the final three with the Los Angeles Sparks. In 2010, she began her collegiate assistant coaching career. From 2010-2017, she was an assistant at her alma mater. In 2018, she moved to Central Michigan University. This past summer, Page head back south to join Nell Fortner’s staff at Georgia Tech.

A member of the 1995 undefeated national champion UConn Huskies, Nykesha Sales spent nine seasons in the WNBA. After four All-Star seasons with the Orlando Miracle from 1999 to 2002, she transitioned with the organization to Uncasville, Connecticut, playing the remaining five seasons of her career as a member of Mike Thibault’s successful Sun teams. After the conclusion of her competitive career, Sales participated in the US State Department’s Sports Envoy Program from 2009-2015, assisting with clinics for children in Senegal, South Africa, Uganda, Venezuela, South Korea and Haiti. Since 2016, she has served as an assistant coach at the University of Central Florida.

After three seasons in the ABL, Sheri Sam, a product of Vanderbilt University, took her talents to the WNBA, where she became a successful journeywoman. She spent her first four seasons in the Sunshine State, one with the Orlando Miracle and three with the Miami Sol, including an All-Star effort in 2002. When the Sol folded after the 2003 season, she headed to the Pacific Northwest, winning a title with the Seattle Storm in 2004. Seasons in Charlotte and Indiana followed before Sam ended her career on top, winning a second championship with the Detroit Shock in 2008. From 2013 to 2017, she served as an assistant coach at Eastern Illinois University. Following the 2017 collegiate season, she moved to the secondary school level, working as a director of athletics and advancement in the San Francisco Bay Area.

Sheryl Swoopes is an undisputed all-timer, playing the majority of her 12-year WNBA career with the Houston Comets, where she won four championships and three MVPs. Since then, Swoopes has had some less-than successful coaching stints, first at Mercer Island High School in Washington State from 2009-2010 and then at Loyola University Chicago from 2013-2016. In 2017, Swoopes returned to her alma mater, Texas Tech. After first serving as Director of Player Development and television analyst, she was elevated to an assistant coach in 2018. During the 2019 WNBA playoffs, Swoopes also impressed as a guest analyst for ESPN.