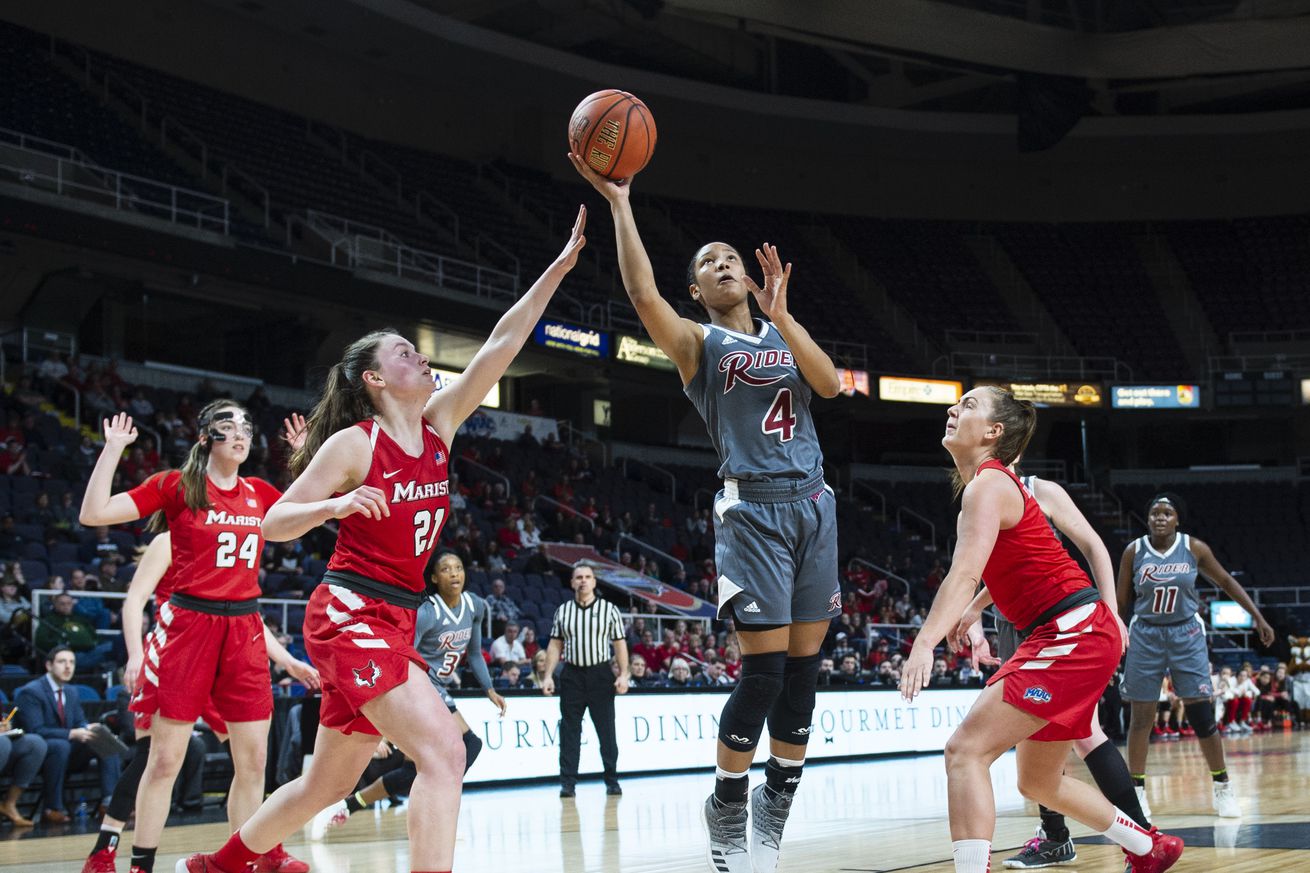 Can Rider guard and Nancy Lieberman Award finalist Stella Johnson (#4) rise to the occasion and earn a meeting with Marist in the title round? | Photo by Gregory Fisher/Icon Sportswire via Getty Images

The No. 1 Rider Broncs and No. 2 Marist Red Foxes will begin their respective Metro Atlantic Athletic Conference Tournament runs on opposite sides of the bracket, with identical 25-4 (18-2 MAAC) records. Can the Quinnipiac Bobcats rise from the fifth seed to win their fourth consecutive tournament title and the automatic bid to the Big Dance?

This story has been updated with a statements from MAAC leadership.

After banning fan attendance on Wednesday, March 11, the Metro Atlantic Athletic Conference announced Thursday the cancellation of its men’s and women’s tournaments “in response to the immediate and ever-growing concerns regarding the COVID-19 pandemic.”

Three quarterfinal games were played before the tournament was cancelled, with the expected teams — Rider, Marist and Fairfield — advancing to the now-cancelled semifinals.

No. 4 Quinnipiac and No. 5 Manhattan did not get a chance to tip off in the fourth quarterfinal matchup before the tournament was called off.

Scores and game notes are below.

No. 1 and No. 2 in the standings, respectively, the Broncs and Red Foxes are positioned on opposite sides of the bracket, seemingly poised for a championship clash.

The Broncs ride into the quarterfinals with the momentum of being crowned regular-season champions, and star player Stella Johnson having extra juice after being named one of five finalists for the 2020 Nancy Lieberman Award, along with Te’a Cooper (Baylor), Crystal Dangerfield (Connecticut), Sabrina Ionescu (Oregon) and Tyasha Harris (South Carolina).

The Red Foxes have momentum of their own in the form of an 11-game winning streak to close MAAC play (to the Broncs’ streak of eight). Marist also should feel confident about its 63-58 win over Rider on Feb. 11 — revenge for its 72-76 overtime loss to the Broncs on Jan. 16.

A third meeting between these teams would make for an exciting championship game, with either able to emerge victorious. Yet, there are three teams looking to pull off an upset: Fairfield, Manhattan and Quinnipiac.

Rider’s other conference loss was a 56-67 upset to ninth-seeded Saint Peters on Feb. 6.

Manhattan and Quinnipiac — with 15-14 (12-8 MAAC) records like Fairfield — are fourth and fifth, respectively, and must go through each other to get to the semifinals. Though in the middle of the pack, Quinnipiac, based on recent history, has the edge of this trio, having won the last three MAAC Tournament titles.

The Quinnipiac Bobcats defeated the Broncs to win the 2017 tournament title; they went through the Red Foxes in 2018. Last year, Quinnipiac propelled a 30-point blowout of Marist to get the goods.

Will the Bobcats be in the championship mix this year and vie for a fourth consecutive title? Or will Rider or Marist reign supreme, perhaps going through each other to taste MAAC Tournament glory?

The only thing at stake is the automatic bid to the NCAA Tournament.

Game 4: No. 1 Rider is on to the semifinals after edging past No. 8 Niagara 79-75. Nancy Lieberman Award finalist Stella Johnson carried the load with a game-high 37 points, 14 rebounds to make it a double-double, three assists, two blocks and one steal. Without help on both sides of the ball, can Johnson continue to carry the loud through Saturday should the Broncs make it to the final?

Game 5: No. 2 Marist cruised past No. 10 Monmouth 68-44 to make it to the semis. The Red Foxes got off to a 10-point lead in the first quarter and never looked back, an effort helped along handily by Rebekah Hand’s game-high 18 points. With three of her teammates also scoring in double figures, it was a balanced attack that should serve the Red Foxes well from a rest standpoint moving forward.

Game 6: No. 3 Fairfield toppled No. 5 Siena 72-56 to advance to the semifinals. Lou Lopez-Senechal was the game-high scorer with 19 points and made it a double-double by pulling down 10 rebounds. With just two players scoring in double figures, Siena was no match for Fairfield’s offense, which saw four players tally double-digit scoring. Additionally, Fairfield (11 turnovers) scored 19 points off turnovers, while Siena (13 turnovers) scored just three points off Fairfield’s lost possessions.