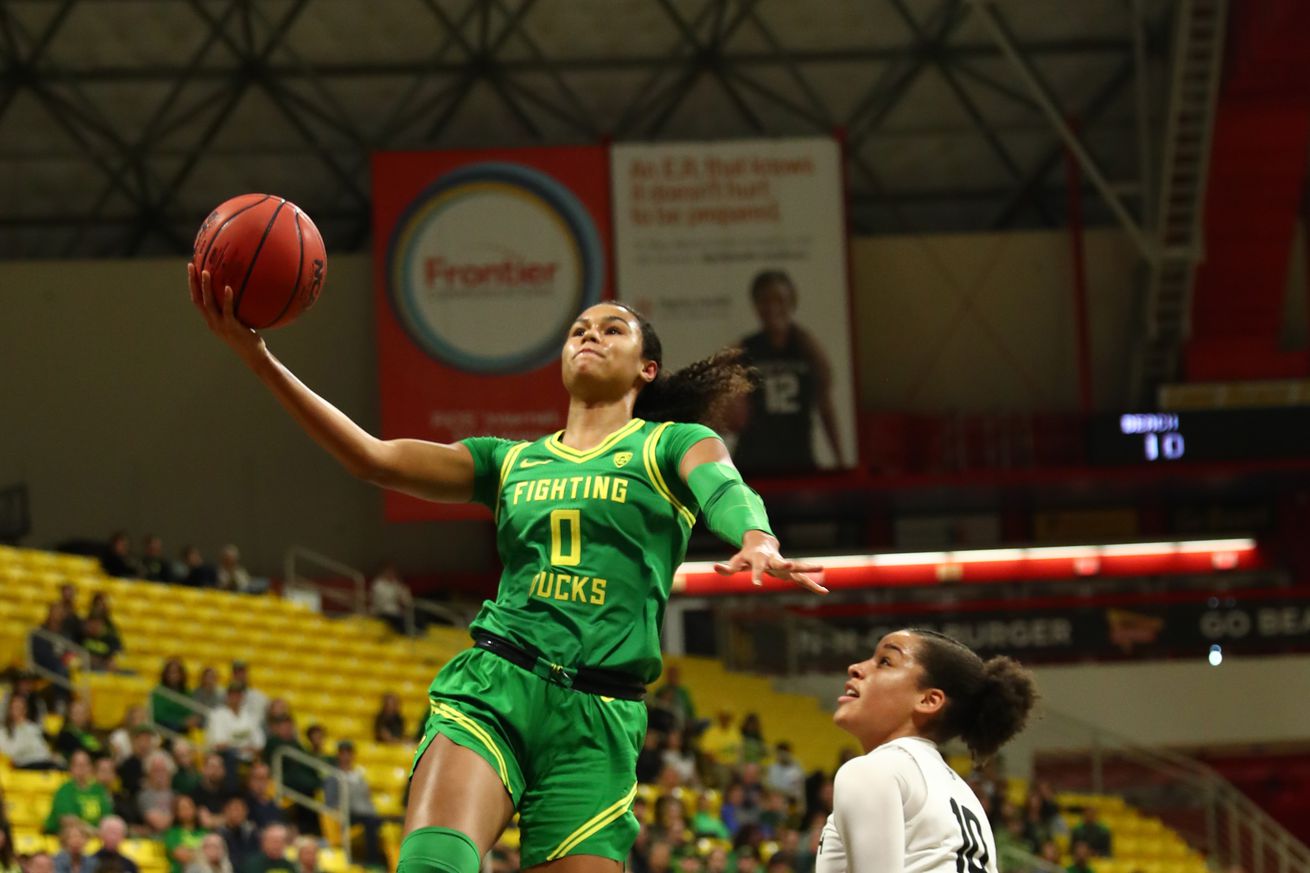 Satou Sabally (airborne) is highly skilled for her size — and her game just keeps improving. | Photo by Joe Scarnici/Getty Images

Oregon Ducks forward Satou Sabally revealed on Thursday that she intends to forego her senior year and declare for the 2020 WNBA Draft. It’s a decision that will impact the draft’s early rounds because the talented scorer projects to be a top pick.

Any time a WNBA Draft-eligible junior (or, in some cases, sophomore) announces that she will forgo the remainder of her NCAA eligibility to play in the pros, draft boards tend to get shaken up a bit. Just last year, Notre Dame junior Jackie Young left the Irish a season early and was then drafted No. 1 overall — something that WNBA general managers might not have known for sure was going to happen, but had to prepare for anyway.

The first such domino of the 2020 draft class fell on Thursday when Oregon Ducks junior Satou Sabally revealed she would be declaring her draft eligibility after the 2019-20 NCAA season.

Sabally’s announcement immediately launches her into the lottery pick conversation. The superbly talented forward is believed by many to be just now scratching the surface of her potential. At just 21 years old, whichever WNBA team drafts her will have that much more time to turn her into a star.

So what is it that makes Sabally so special?

Sabally made an instant impact on the Oregon program, winning Pac-12 Freshman of the Year in 2017-18 and racking up additional honors since. She was named to the All-Pac-12 team a season later, and prior to her junior campaign was named to the Wade and Wooden Award watch lists. Sabally is also a finalist for the 2019 Cheryl Miller Award, bestowed upon the nation’s top small forward.

Sabally also has experience in the international circuit, representing her home country of Germany. Sabally dominated the 2018 FIBA U20 Women’s European Championship, averaging 20.7 points and 10 rebounds per game — both competition highs.

How she helps the Ducks

Though Oregon’s pass-heavy offense (64.7 percent assist rate, per Her Hoop Stats) means that no single player is expected to carry the scoring, one doesn’t need to watch much of the Ducks to realize Sabally is very good at tallying points. At 6’4”, she possesses guard skills with a quick first step and a capable outside shot, all while moving like players several inches shorter.

WATCH: Sabally’s slick move and finish on the fast break

Plays like these are what make Sabally so fun to watch — and such a coveted prospect. There’s a fluidity to her game that you simply don’t see in many other players. Physically speaking, she has all the tools to become an elite scorer at the next level: length, quickness, athleticism.

Sabally is more than just a typical “project” player, though. As evidenced by the awards and honors she’s earned while at Oregon, her game has evolved to a point where — even on a loaded team — she’s considered one of the nation’s standout players. On the season, Sabally is averaging 16 points (1.19 per scoring attempt) and 7.4 rebounds per game, along with a free-throw rate of 26 percent.

It’s not difficult to see any of those numbers translating to the pros, which ultimately seals the deal on Sabally as a prospect. Many players in this class have potential, but Sabally is simply oozing it, and she’ll almost certainly be rewarded with an early first-round call on draft day.

There aren’t many games remaining in the Pac-12 regular season so Oregon’s match against Stanford on Feb. 24 will be a must-watch (ESPN2). The conference’s tournament championship (which Oregon will be heavily favored to play in) also will be broadcast on ESPN2 on Mar. 8.