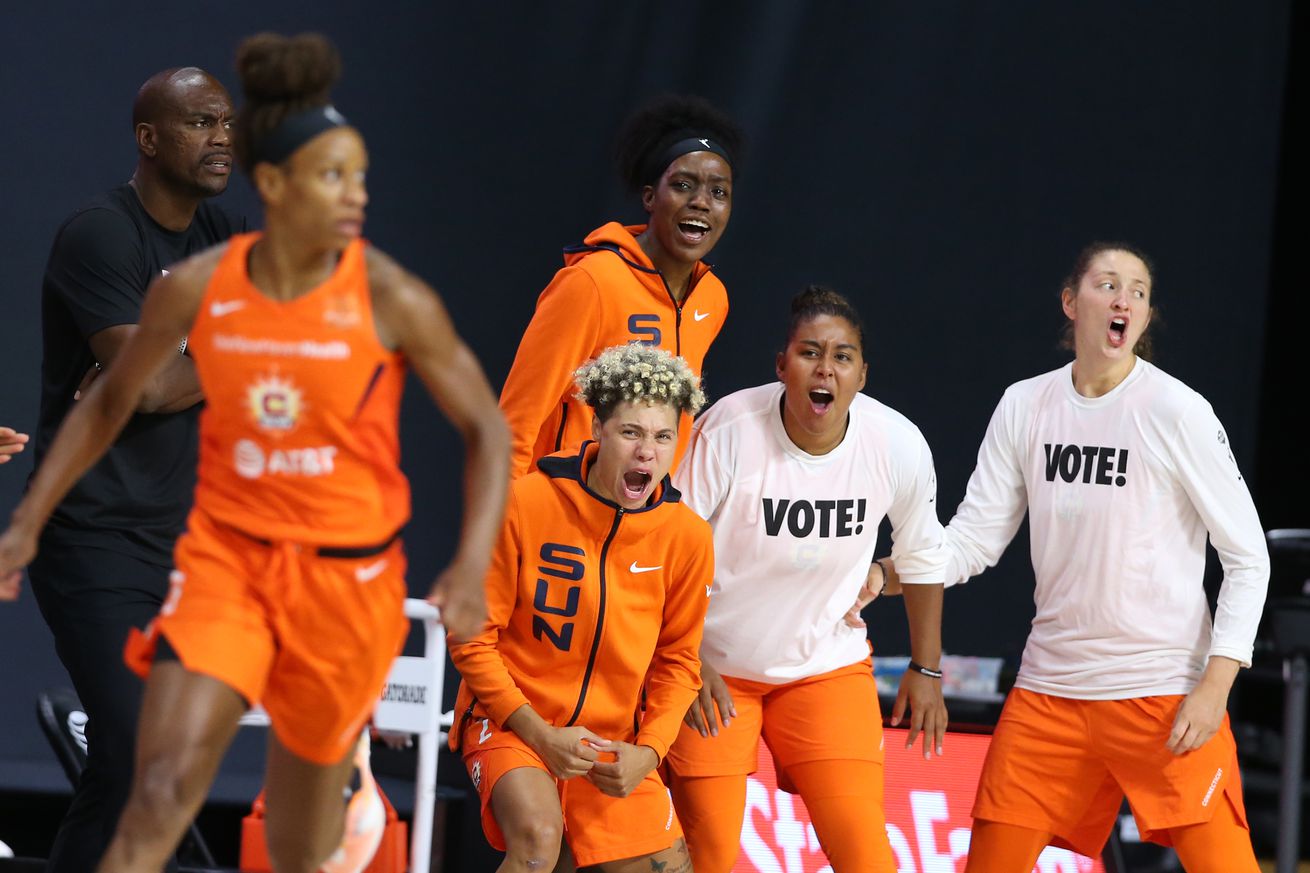 Jasmine Thomas (left) gave her Connecticut Sun teammates a lot to cheer about in Game 1. | Photo by Stephen Gosling/NBAE via Getty Images

The Las Vegas Aces won’t get caught sleeping in Game 2 after the Connecticut Sun put the league on notice with their 25-point win in Game 1 against the No. 1 seed. On the other side of the bracket, the Minnesota Lynx will begin their series against the Seattle Storm in a battle between the 2017 and 2018 champions.

A lot is on the line in women’s basketball with the 2020 WNBA Playoffs heating up in the semifinals.

First, the No. 7 Connecticut Sun will look to push a 2-0 series lead against the No. 1 Las Vegas Aces. With MVP A’ja Wilson and Sixth Woman of the Year Dearica Hamby, the Aces have the talent to come back and win three straight games. To do so, they’ll have to test the leadership and persistence of the Sun’s Alyssa Thomas.

Nobody in the league wants to mess with the playoff version of A.T.

In the second game of tonight’s semifinals doubleheader, the No. 2 Seattle Storm take on the No. 4 Minnesota Lynx in battle between two of the top franchises in the sport. The Lynx last won the WNBA championship in 2017 and head coach Cheryl Reeve, the 2020 Coach of the Year, has masterfully guided them back to the semifinals after just a two-year absence. Meanwhile, Storm head coach Gary Kloppenburg — filling in for Dan Hughes for just one season as a health precaution for Hughes — and has done a fantastic job with the help of the same core group that won the title in 2018.

In Sunday’s Game 1, the Aces were in position to confirm their worthiness as the No. 1 seed after eclipsing the Storm for the top spot in the regular-season finale. Instead, the Aces left the door open for the Sun to build on their momentum and the Sun seized the opportunity with an 87-62 blowout to take Game 1 of the semifinals series.

Although it was a huge win for the Sun, they still have a lot of work to do against an A’ja Wilson-led club that is sure to pack a punch in Game 2. Connecticut head coach Curt Miller will hope to get more out of DeWanna Bonner, who scored just eight points in Game 1. He also needs his third- and fourth-best scorers, Brionna Jones and Jasmine Thomas, to contribute consistently and prevent Bonner and Alyssa Thomas from carrying the bulk of the scoring load.

J. Thomas was huge in Game 1, scoring a career-high 31 points, so she just needs to keep doing what she’s doing.

On the other side, Las Vegas got very little from everyone not named A’ja Wilson or Jackie Young. Kayla McBride played the third-most minutes after those two, but scored just four points. Angel McCoughtry and Dearica Hamby also struggled on Sunday and finished with six and four points, respectively. The Aces’ top players need to get out of their slumps if they want to bounce back.

On the other side of the bracket, the Lynx and Storm have not played yet due to inconclusive COVID-19 tests on Storm players on Sunday. One unnamed player, awaiting the results of subsequent tests, remains isolated from the team. Prior to the scheduled 9 p.m tipoff the rest of the players in question each received two negative tests.

Here’s what WNBA commissioner Cathy Engelbert said of the situation:

“The health and safety of all players and staff continues to be our top priority. After comprehensive consultation with health and safety specialists following the additional testing of Seattle’s players and staff as well as the implementation of contact tracing, we feel confident in moving forward with the Storm and Lynx taking the court for Game 1 of their Semifinals series. We are closely monitoring the situation and are coordinating with medical specialists.”

Key to the matchup: Kayla McBride. McBride has been an unsung heroine this season. On a team that intentionally takes fewer threes than other teams, she has done her best to pick her spots as a sharpshooter and help the team in that category. Although her 3-point percentage of 34.2 percent is down form her career mark of 36.7 percent, she is still the team’s best 3-point option. On Sunday, she was 0-of-1 from distance but is still the one player who needs to be taking more threes as long as they’re good looks.

Key to the matchup: See our Game 1 preview.