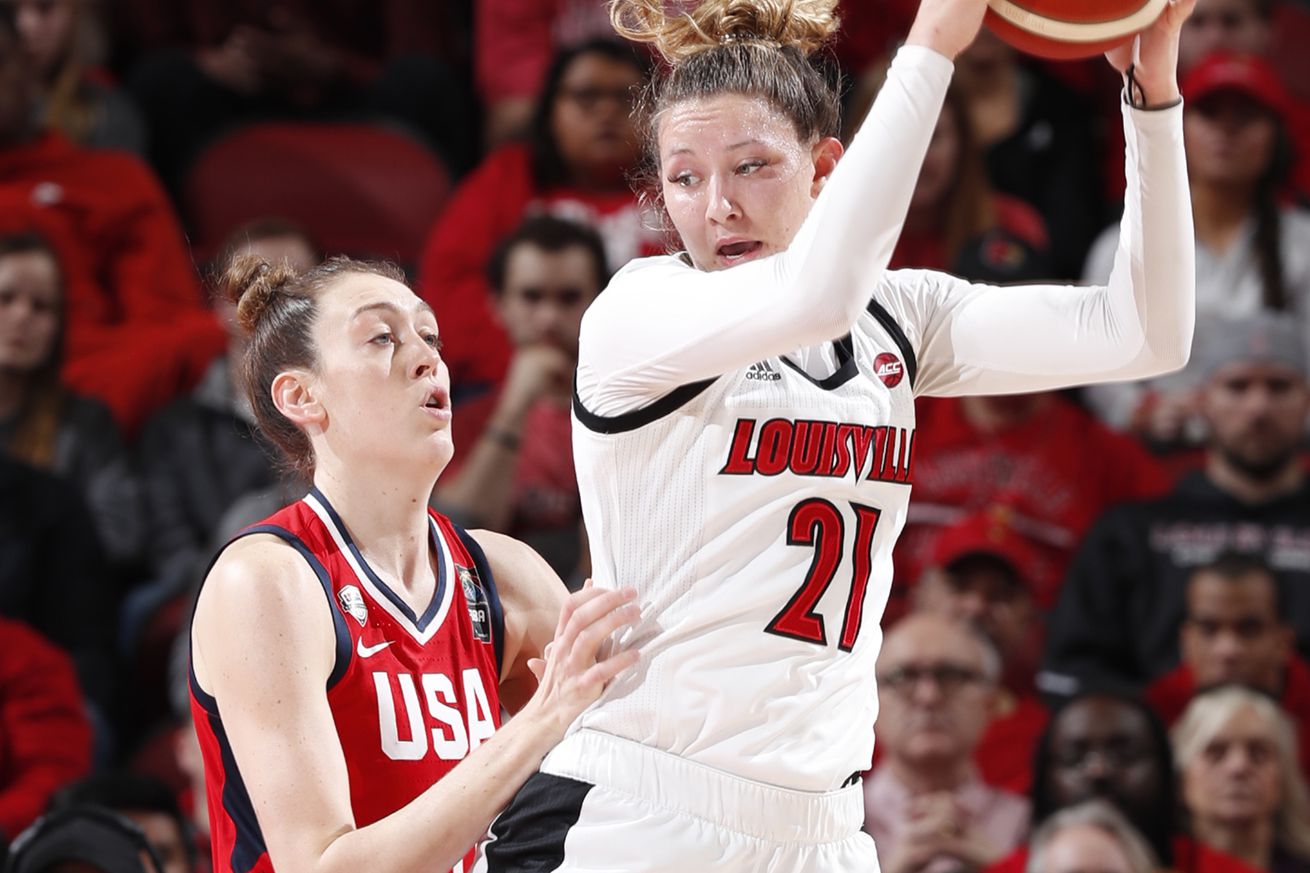 Forward Kylee Shook (right) and the Louisville Cardinals bounced back last week from their three straight losses dating back to their bout with Team USA on Feb. 2, 2020. | Photo by Jeff Reinking/NBAE via Getty Images

The Louisville Cardinals have climbed to No. 5 in the AP Poll while the UConn Huskies have fallen out of the Top 5 for the first time in 253 weeks. Plus, Maryland’s rise continues and the Kentucky Wildcats move up four spots.

Here’s an analysis of some of the teams that have risen — and fallen — in Week 16.

Louisville Cardinals bounce back and climb

After a week in which the Cardinals lost to the No. 17 Florida State Seminoles and the unranked Syracuse Orange, Louisville bounced back with a huge win over then-No. 4 NC State Wolfpack on Feb. 13. The Cards also won their next game, easily, against a struggling Notre Dame Fighting Irish.

After starting the season at No. 9, the Cardinals have had an up-and-down year. Their triumph over the No. 3 Oregon Ducks on Nov. 30 was followed by a loss to the unranked Ohio State Buckeyes. Last week, they did the reverse: followed the embarrassing loss to Syracuse with a major resume win.

Louisville ends its season against four non-ranked opponents. Of those four, the Georgia Tech Yellow Jackets (8-7 ACC) can be pesky; they recently upset No. 10 NC State. The Virginia Tech Hokies and Boston College Eagles both have winning records in the ACC. Louisville shouldn’t have a problem getting past the last-place Pittsburgh Panthers.

If the Cardinals can enter the ACC Tournament without any more losses, they still will have a shot at a No. 1 seed because the teams that are No. 3 and No. 4 in the AP rankings — Oregon and Stanford, respectively — can’t both win the Pac-12, but Louisville can still win the ACC outright (regular season and tournament).

With the ACC being only the third or fourth best conference in the nation behind the SEC, the Pac-12 and, perhaps, the Big Ten, the selection committee may lean toward giving the Pac-12 two No. 1s, especially if Oregon and Stanford split the conference crown with one winning the regular season and the other winning the tournament.

Regardless of where everyone ends up in March, it must feel good for the No. 1 South Carolina Gamecocks, No. 2 Baylor Lady Bears, No. 3 Oregon Ducks, No. 4 Stanford Cardinal and No. 5 Louisville Cardinals to be ahead of the 11-time national champion UConn Huskies, who fell outside the Top 5 (to No. 6) for the first time since 2007.

The Gamecocks, Lady Bears and Ducks all played a hand in the Huskies’ descent.

The Terrapins have entered one-seed discussions due to the strength of the Big Ten. Maryland has an even easier remaining schedule than Louisville, with games coming up against the Wisconsin Badgers, Purdue Boilermakers and Minnesota Golden Gophers. Maryland’s game against No. 19 Iowa on Feb. 13 marked its last chance to pick up a big regular-season resume win.

The Terps took care of business with a resounding 93-59 win that moved them to No. 7 in the poll.

Maryland has capitalized on all of its opportunities against ranked opponents since the loss to Iowa on Jan. 9. The Terrapins have won 11 games in a row since that date and four of those victories came against Top 25 opponents, making up for the losses they suffered in non-conference play against South Carolina (on Nov. 10) and NC State (on Dec. 5). If they win the Big Ten outright, the Terrapins could steal the final one-seed from Louisville.

Others on the rise

The No. 4 Stanford Cardinal squeaked past the Colorado Buffaloes 69-66 on Sunday and climbed four spots because the four teams in front of them in poll (NC State, UConn, No. 9 Mississippi State Bulldogs and No. 8 UCLA Bruins) suffered losses.

Meanwhile, the No. 14 Kentucky Wildcats’ four-spot jump highlighted the movement among teams ranked 11 through 25. The Wildcats received 26 points and 10 rebounds from Rhyne Howard for a comfortable win over then-No. 6 Mississippi State Bulldogs on Sunday in their only game of the week.

After dropping two of their last four games, including an 80-76 loss to the unranked Ohio State Buckeyes on Sunday, the Indiana Hoosiers fell four spots to No. 24.

The Hoosiers remain the only team to defeat South Carolina this season (at Paradise Jam on Nov. 28) and were a feel-good story during non-conference play. Now, however, Indiana sits in fourth place in the Big Ten with a 10-5 conference record. The Hoosiers entered the Big Ten Tournament as a 10-seed last year and are hoping they can improve on that this year. If they can get it done, the Hoosiers have the kind of spunk that could allow them to catch fire in the conference tournament.

Like Indiana, the Tennessee Lady Volunteers started the season as a feel-good story and now face trouble in paradise again. Nobody in Knoxville wants a repeat of last year’s NCAA Tournament run that ended in a first-round loss as an 11-seed. Tennessee needs a big bounce-back win over the No. 22 Arkansas Razorbacks on Thursday if it wants to get back into the rankings. Any loss to a lesser team from here on out could push them to double-digit seeding.