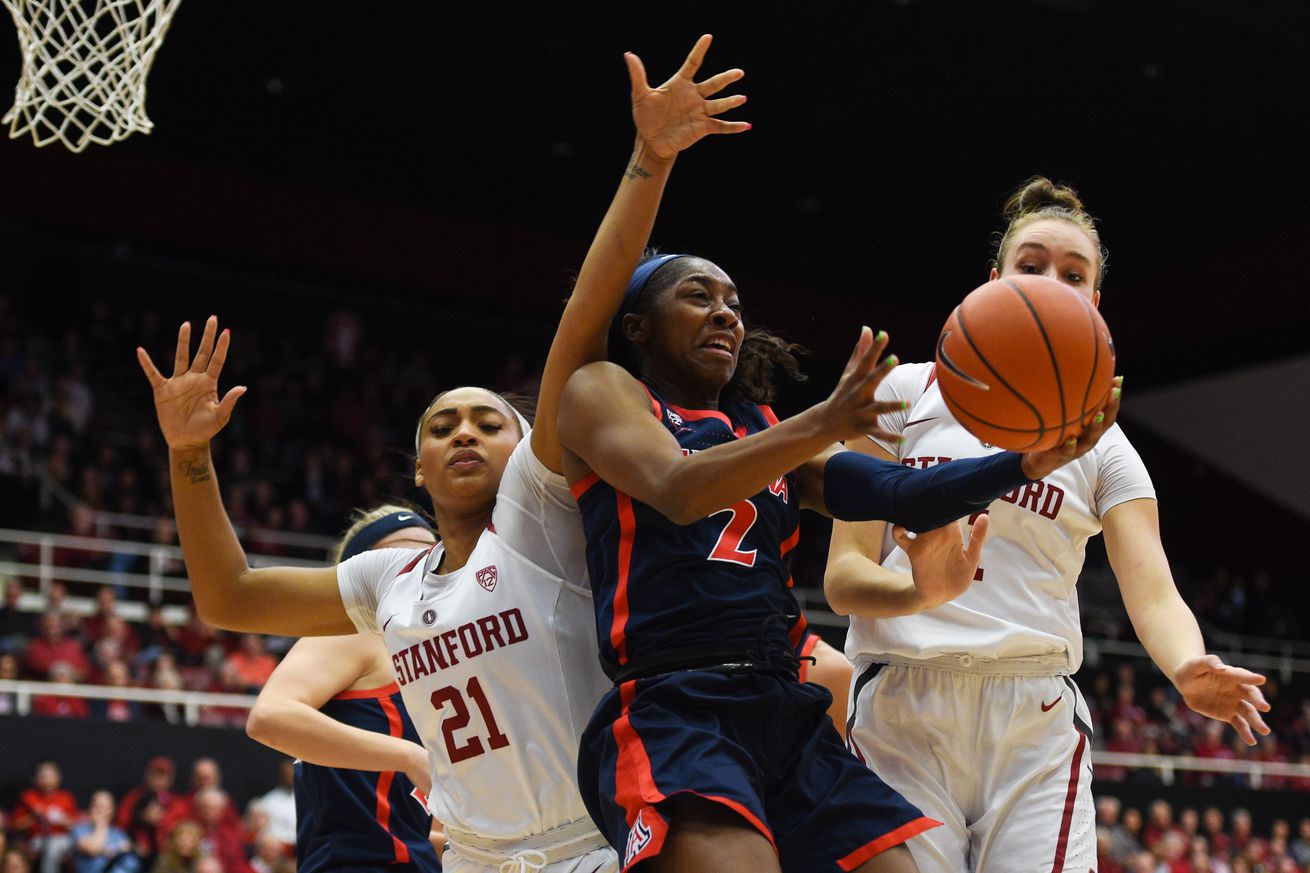 Aari McDonald (with ball) and the Arizona Wildcats have kept things interesting in the Pac-12 this year. | Photo by Cody Glenn/Icon Sportswire via Getty Images

The past week was highlighted by the Arizona Wildcats’ big win over then-No. 8 UCLA Bruins. The Wildcats are now flirting with becoming a Top 10 team, with the Maryland Terrapins following close behind.

It’s always fun to wake up on Monday and know that the new AP rankings are coming out soon. In the past couple of seasons, there hasn’t been a single dominant program. That means your team, no matter where they are in the Top 25, could become a contender in the NCAA Tournament come March.

Here’s an analysis of some of the teams that have risen — and fallen — in Week 14.

Over the past two weeks, the Wildcats also defeated the No. 19 Arizona State Sun Devils and the USC Trojans. Arizona moved up two spots, from No. 18 to No. 16 in the Week 13 (Jan. 27) rankings. Now, the Wildcats have been catapulted all the way up to No. 12 behind the continued leadership of McDonald, the nation’s ninth-best scorer (as of Feb. 2). The junior guard averages 20.8 points per game and scored 20 or more points against the Sun Devils, Bruins and Trojans. She was rewarded as the top player in the Pac-12 for Week 13:

This week’s grade: ️@AariMcdonald earned #Pac12WBB Player of the Week honors after leading @ArizonaWBB to a weekend sweep and extending her double-digit scoring streak to 58 games! ➡️ https://t.co/z3AJMyZNDi pic.twitter.com/4RXH9A8CFS

Since losing three games in a row to elite teams (UCLA, No. 9 Oregon State Beavers, No. 3 Oregon Ducks) from Jan. 5-12, Arizona has won five straight. The Wildcats are now knocking on the door of becoming a Top 10 team after starting the season outside the Top 25.

The Terrapins will face both the Hoosiers and the No. 20 Iowa Hawkeyes a second time this season with hopes of improving their resume even more. Iowa defeated Maryland 66-61 in the teams’ first meeting.

Highlights: Maryland clicking on all cylinders against Ohio State

DePaul seemed ready to run away as the Big East’s regular-season champ. The Blue Demons already had defeated the other nine teams in the conference before their second matchup against the Blue Jays. Only two of those wins (over Creighton and the St. John’s Red Storm) were by single digits.

The loss to Creighton is now DePaul’s only notable blemish — the other two losses were to UConn and Oregon State.

Rhyne Howard has missed two games after breaking a finger on Jan. 27, including a 70-62 loss to the Florida Gators (12-10, 3-6 SEC) on Feb. 2. The injury is on her left hand — she shoots right — and the team expects her to return to action in mid-February. The loss to the Gators dropped Kentucky two spots in the rankings, but the team has a chance to be at full strength come March.

The Aggies hope to be at full strength soon because dominant scorer Chennedy Carter is expected to return from the ankle injury she suffered on Jan. 9 against the LSU Tigers. Texas A&M lost that game to LSU, and lost to the Tigers again, 59-58, on Feb. 2. Between those losses, the Aggies recorded four wins. But the most recent loss was enough to drop the Aggies one spot in the rankings.

The Seminoles saw senior guard Nausia Woolfolk go down with an ankle injury during a win over the Miami Hurricanes on Jan. 26. Florida State lost its next game — against the Boston College Eagles (12-9, 5-5 ACC) — by a score of 65-56 on Jan. 30. Woolfolk, Kiah Gillespie and Nicki Ekhomu account for 60 percent of the Seminoles’ scoring with Woolfolk averaging 14.5 points per contest.

Woolfolk returned against the Pittsburgh Panthers on Feb. 1 but played only 18 minutes and scored just three points. Ekhomu, a fellow guard, stepped up with 25 points and the Seminoles defeated the Panthers 66-41. Still, the loss to Boston College did its damage. The Seminoles dropped three spots in the poll.