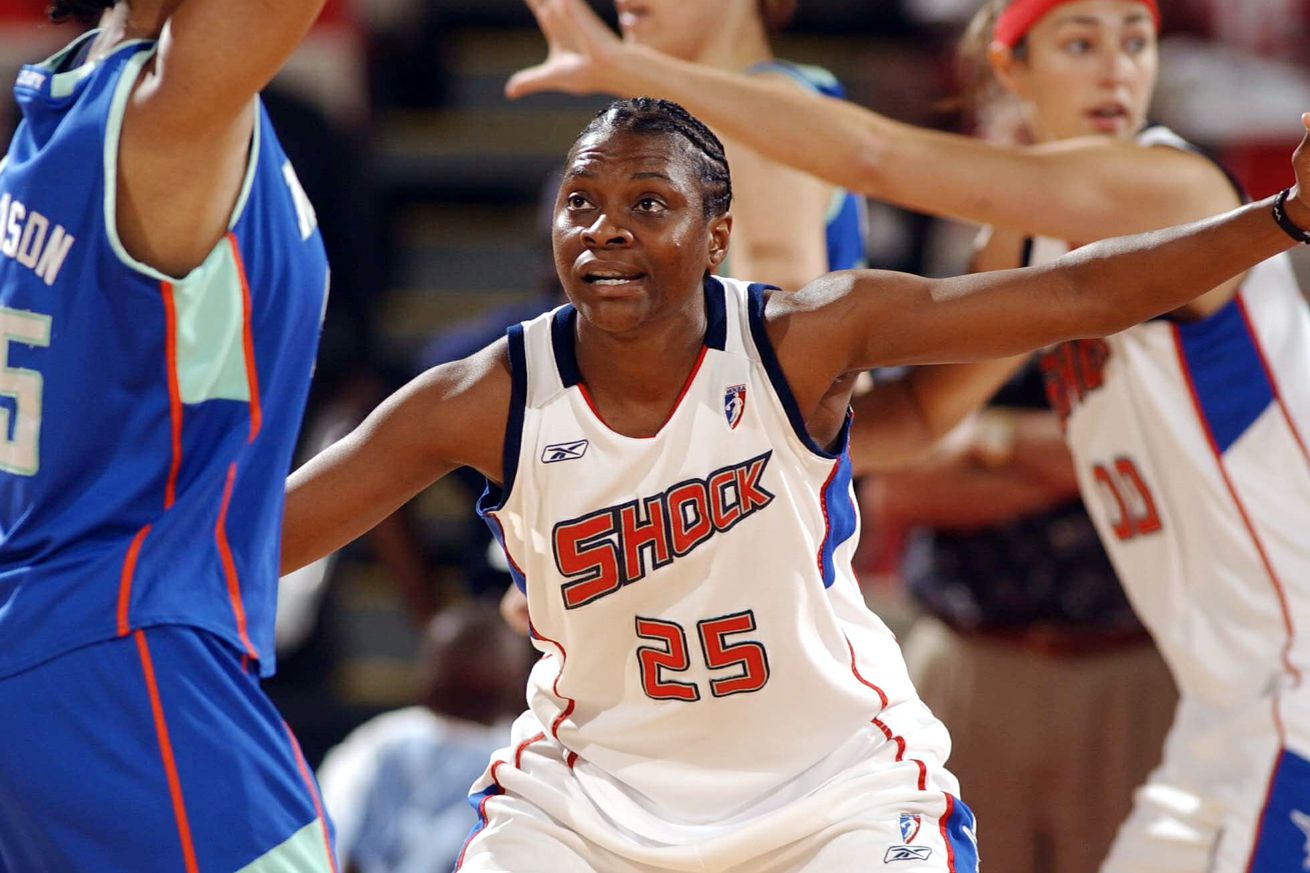 Merlakia Jones played her final season with the Detroit Shock after seven years with the Cleveland Rockers. | Photo by Allen Einstein/NBAE via Getty Images

There are some active WNBA players challenging for the title of greatest No. 13 draft pick — Jessica Breland and Alex Bentley, in particular — but for now, Merlakia Jones, who was picked in the first-ever WNBA draft, owns the honor.

Merlakia Jones played four years at the University of Florida from 1991-1995 before being drafted at No. 13 in 1997 — the first-ever WNBA Draft — by the Cleveland Rockers. Jones played seven of her eight WNBA seasons in Cleveland, forced to play with the Detroit Shock in 2004 after the Rockers folded. Jones was a three-time All-Star from 1999-2001 and was named to the All-WNBA First Team in 2001. Jones started more than 20 games in four seasons and scored the most points of any player picked 13th overall with 2,353 career points.

The 1998 WNBA Draft yielded another No. 13 pick who had staying power in the WNBA. Rita Williams was drafted by the Washington Mystics, where she played for two seasons. In 2000, she was sent to the Indiana Fever in an expansion draft; she had her two most productive seasons in Indiana, starting 58 of 64 games she appeared in and averaged double-figure scoring. Williams also made the All-Star Game in 2001. In 2002, she was traded midseason to the Houston Comets before playing her final season with the Seattle Storm in 2003. Williams finished with 1,185 career points and 186 career appearances.

Challengers to the throne

Jessica Breland was drafted by the Minnesota Lynx 2011 and was immediately traded to the New York Liberty. Breland fell to the second round after redshirting at North Carolina as she fought and won a battle with Hodgkin’s lymphoma.

After just nine appearances, the Liberty waived Breland and she was picked up by the Connecticut Sun for a short spell. After signing a training camp contract in 2013 with the Indiana Fever, Breland played 30 games and went to the Chicago Sky, making the All-Star team in her first season with Chicago. After four seasons with the Sky, Breland moved on to the Atlanta Dream, where she spent two seasons before being traded to the Phoenix Mercury during the 2020 offseason. Breland is not a scorer, but she defends and rebounds, which has given her staying power in the league. Breland’s 180 career starts are the most for any player drafted No. 13 and her 243 appearances are second.

Alex Bentley, drafted in 2013 by the Atlanta Dream, has scored 2,350 career points, just three points behind Merlakia Jones. She was traded to Connecticut after her rookie season, where she played for just over five seasons. In 2018, she was traded back to the Dream, where she served a sixth player-type role. Bentley has had the most double-digit scoring seasons of any player drafted No. 13 and has appeared in 222 games. Bentley is not currently on a WNBA roster.

Sophie Cunningham was taken in the 2019 WNBA Draft by the Phoenix Mercury. On a veteran team, Cunningham averaged just over 12 minutes a game, but did manage five starts due to injuries to other players. Cunningham’s highlight of her first professional season was against the Indiana Fever on July 28, 2019, when she scored 19 points in 22 minutes of play. Cunningham remains on the Mercury’s roster and could serve in a more expanded backup role in her second season.

The 2020 WNBA Draft saw Kylee Shook, the 2020 ACC Defensive Player of the Year, drafted by the New York Liberty. Shook can shoot from just about anywhere on the floor and is a bonafide shot blocker. Even without a preseason to prove herself, Shook got a roster spot on the Liberty.

No. 13 has not proven to be unlucky for these players, who have shown that just because you bounce around the league, it does not mean you do not belong.