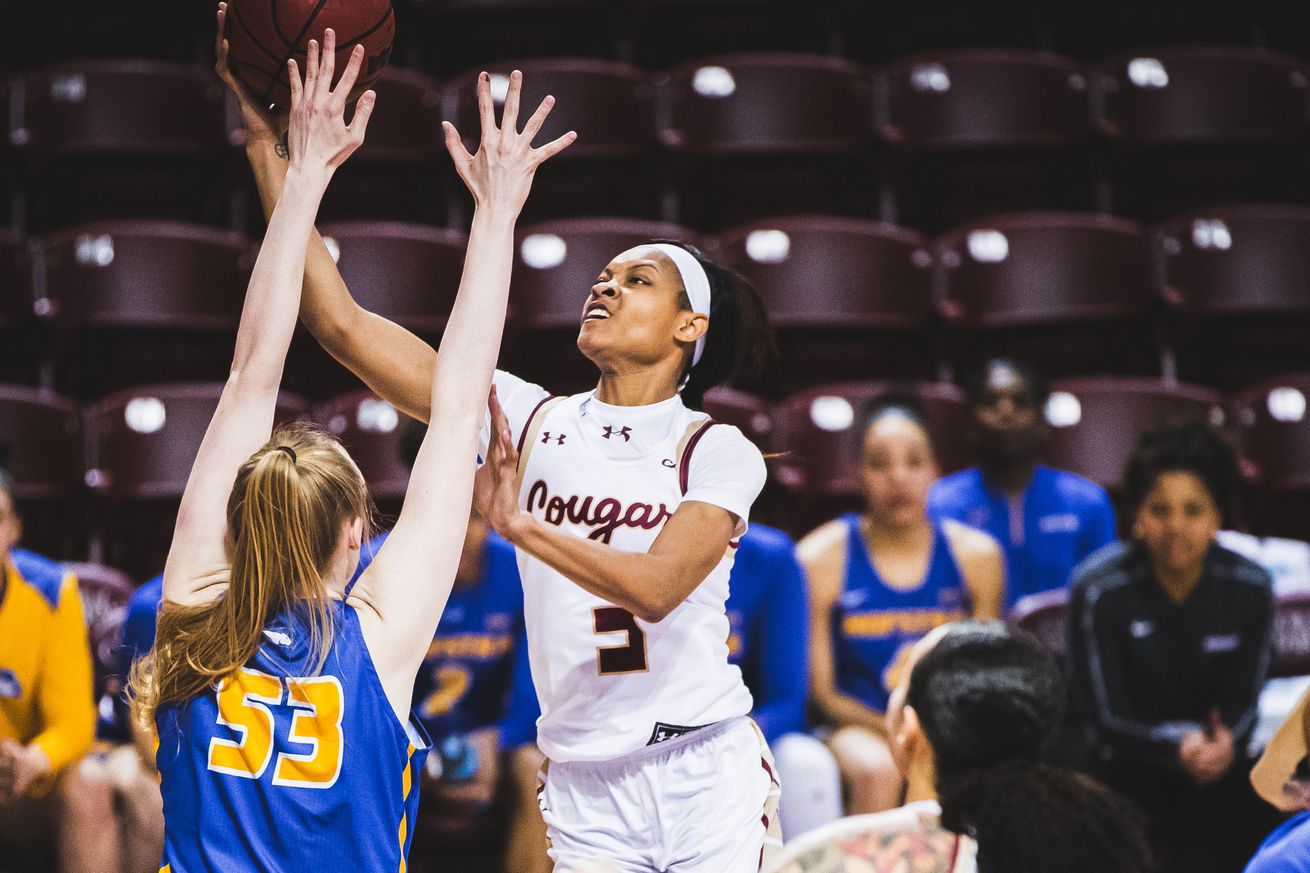 Charleston’s Latrice Perkins (jersey #3) goes up for a shot against the Hofstra Pride | Photo courtesy of College of Charleston women’s basketball via Twitter.

The Charleston Cougars and Northeastern Huskies return more talent than any other teams in the CAA. Are they really contenders? And can a high-scoring Towson Tiger run away with Player of the Year?

The James Madison Dukes were so good last year that they almost defeated the eventual No. 4 team in the nation in the Maryland Terrapins and sent their star player, Kamiah Smalls, off to the WNBA where she showed flashes of potential. And the Drexel Dragons, led by Bailey Greenberg, were just as good, tying the Dukes’ 16-2 conference record and blowing them out in a head-to-head matchup before the Dukes returned the favor later in the season.

Those four teams are the Charleston Cougars, Northeastern Huskies, Delaware Blue Hens and Elon Phoenix. Expect them to contend even though all of them had losing overall records last year. The Cougars, Huskies and Phoenix return the most talent in the conference, while the Blue Hens have brought in two key transfers to go with one returning star. The Cougars and Huskies in particular should be very strong. And for both of those teams, finding success has been a rare occurrence with the Huskies’ 1999 NCAA Tournament bid being the only trip to the Big Dance between the two of them.

Rewind: A look at where the CAA left off

Drexel won the tiebreaker for the CAA regular season title in 2019-20, but the Dukes finished with a better overall record (25-4) than the Dragons (23-7). The teams who finished seventh through 10th in the conference began the CAA Tournament on March 11, but the quarterfinals scheduled for March 12 did not take place due to the global COVID-19 pandemic so there was no tournament champion crowned.

Highlights: James Madison working hard to win a February game and split with Drexel in 2019-20

The 2020 NCAA Tournament was canceled due to the pandemic, but JMU (10-seed) and Drexel (13-seed) both represented the CAA in Swish Appeal’s hypothetical bracket.

Here’s where each team stands entering the 2020-21 season, in order of the preseason standings predicted by the CAA’s head coaches:

Kamiah Smalls has left, but the Dukes have a Power 5 transfer in Brianna Tinsley (averaged 7.8 points for the Virginia Cavaliers in 2018-19), a star sophomore in Kiki Jefferson and the No. 85 recruit from the high school Class of 2020 in Jamia Hazell. Tinsley could become a star in a lesser conference, while Jefferson could make the All-CAA First Team. Meanwhile, Hazell is the ninth-best mid-major prospect in the nation and the best in the CAA.

Take a look at the accomplishments Amy Mallon has achieved prior to coming into her first year as a head coach! #GoDragons pic.twitter.com/uub8qLUoeb

Like James Madison, Drexel has lost a major star — in their case, Bailey Greenberg to graduation. This year may not be another 16-2 season for the Dragons, who missed a great opportunity to make their second-ever NCAA Tournament appearance last year. But the duo of senior guard Hannah Nihill and junior guard Keishana Washington will fight to keep the team near the top. The Dragons’ new coach Amy Mallon takes over for Denise Dillon.

Towson’s Kionna Jeter is the only player in the conference returning from the 2019-20 First Team and averaged 18.1 points per game last year. But it remains to be seen if she can keep the team in the top half of the CAA standings without Nukiya Mayi, a secondary star who has graduated.

Returning for the Phoenix…

Elon returns its top five scorers and may be the most complete team in the conference, but lacks a big star. Ariel Colón is the closest thing the Phoenix have to that and she could lead them to success this year with some help from a deep roster of solid players.

The Huskies return their top two scorers and stars in junior forward Alexis Hill and senior guard Stella Clark, that latter of whom was tied for fourth in the CAA with 3.6 assists per game in 2019-20. Northeastern returns another solid scorer in junior guard Kendall Currence and a good all-around player in graduate forward Ayanna Dublin. The Huskies were tied for fourth last year just like they are predicted to be this year. They have the talent to finish better and if not should at least improve upon their .500 conference record and 13-16 overall record.

With Western Carolina Catamounts transfer Jewel Smalls joining the team, the Blue Hens may be able to vault into contention. Smalls is 5-foot-7 but averaged 9.7 rebounds per game last year to go with her 12.3 points. She is immediately eligible while promising Indiana State transfer Ty Battle, who sat out last year, is ready to go as well. Delaware also returns Jasmine Dickey from the All-CAA Second Team.

It’s the eve of our first official practice!

Charleston, which finished tied for eighth last year at 6-12 in the CAA (13-17 overall), has a chance to be really good this season with four of its top five scorers returning. Latrice Perkins, who could jump from the All-CAA Third Team to the All-CAA First Team, leads the way — she averaged a team-high 13.5 points per game last year. Perkins’ fellow guard Tyler Collins, who is the team’s best distributor, and forward Arynn Eady, the team’s top rebounder, could make pushes to be on the conference’s Second Team.

The Tribe finished with a 12-6 conference record last year — only JMU and Drexel also had winning records. However, junior Eva Hodgson has opted-out because of coronavirus concerns and Victoria Reynolds has graduated. Those two combined to average 36.5 points per game for the team last year. Senior guard Nyla Pollard’s all-around offensive talent and a winning culture from last season are the best things the Tribe have going for them.

| Here’s a glimpse into our first practice of the 2020-21 season#HawkYeah pic.twitter.com/wFAqr1hxpy

Even though they finished ninth, the Seahawks were a full six games better than the winless Hofstra Pride last year. However, they may fall behind the Pride this year since they have lost 37.1 points per game with the graduation of GiGi Smith, Lacey Suggs and Ahyiona Vason. The team’s top returning scorer, senior forward Carol-Anne Obusek, averaged just 5.5 points per game last year.

All smiles because the first day of practice is TOMORROW!

It is unlikely that the Pride will repeat their 0-18 effort in conference play from last year because they have impact players Jaylen Hines and Sorelle Ineza returning, giving them more proven talent than some of the other teams in the conference.

As voted on by the CAA coaches:

Jan. 16: Charleston vs. Northeastern. A battle between two teams that return a lot of talent.

Feb. 27: Towson vs. Delaware. Player of the Year candidates Kionna Jeter of Towson and Jasmine Dickey of Delaware featured in this showdown.