Can the WNBA be bigger than its ‘BIGGER THAN BALL’ t-shirt? 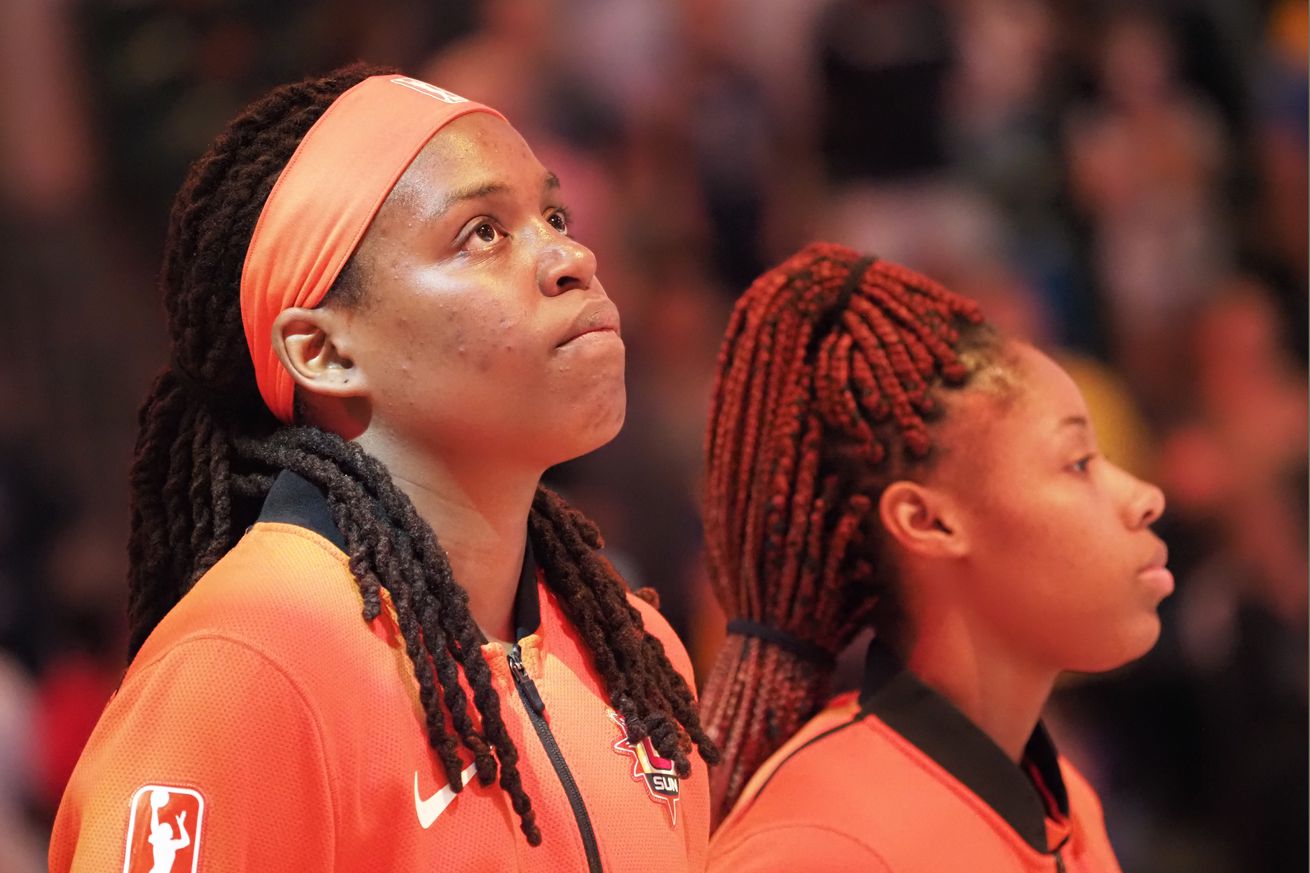 Jonquel Jones stands for the national anthem during the 2019 WNBA season. What can the league do to help this nation truly respect people who look like Jones? | Photo by Ron Hoskins/NBAE via Getty Images

As the WNBA considers scenarios for its 2020 season, protests against the state-sanctioned oppression of people of color continue to course through the nation. To show solidarity with the many women of color who make the league up, the WNBA should incorporate reparative racial justice practices and policies into its return-to-play plans.

In solidarity with those protesting the systemic endangerment of black lives in the United States, the WNBA declared, “The time for change is now. Enough is enough.” The things happening in the country are “bigger than ball.”

The time for change is now. Enough is enough. pic.twitter.com/hXbSgppm5T

Yet, as the saying goes, actions speak louder than words.

For the WNBA, what will “enough is enough” look like? How will the league show its commitment to issues that are “bigger than ball”?

Surely, it can do more than seek to profit off shirts with this supposedly socially-conscious symbol.

“I’m sorry if you’re a WNBA team and the best you can do is that fist what [sic] the league put out then I’m considering you as part of the problem as well,” Jones wrote on Instagram. “The league is 90% black, if it was a player on your team would that be enough?”

Her former teammate, current Atlanta Dream guard Courtney Williams, replied, “They not ready to hear that though.”

What the WNBA needs to do

Conversations about the return of American sports have focused on what needs to happen to make play safe for players, coaches and officials, as well as entertaining for fans.

In The Athletic, NBA writer David Aldridge expresses the absurdity of these so-called “needs,” writing, “It’s just that, right now, the notion that we ‘need’ sports rings hollow. You may want to watch sports in your gender-specific caves … . But we don’t ‘need’ to. What we ‘need’ is to stop killing black people for no good reason.”

Yet, the Sports Industrial Complex, as Aldridge calls it, insists on deeming itself essential.

When the WNBA, a small sector of this Complex, returns, what can it do — what does it need to do — to demonstrate that the league is actually, not just rhetorically, committed to the integrity and humanity of black people? How can the WNBA make reparative racial justice central to its return-to-play plan?

WNBA commissioner Cathy Englebert revealed recently her considerations for the possibility of the league’s return and parameters that need to happen. of the league’s return to the “There has to be a medical plan for testing everyone when they report and then regularly afterward,” Kareem Copeland of The Washington Post wrote.

“One of the conditions for tipping this season would be to make sure we have the right protocols if there’s a positive test,” Engelbert said. “And that there aren’t restrictions that make it impracticable if there’s one positive test. So I think that’s kind of evolving as well.”

But who is the “everyone”?

These people are necessary to a successful relaunch of the WNBA. They are essential but invisible.

And they are, most likely, people of color.

The WNBA must consider these people part of their “everyone.” Their health and well-being should be just as important as that of players, coaches and officials. The league must do all it can to make sure that an ostensibly healthy, asymptomatic WNBA player does not transmit the coronavirus to a worker who lacks health insurance and lives in an intergenerational home in an underserved but over-policed neighborhood.

While there is only so much the WNBA can do to begin to correct the racial ills that have been embedded in American soil and society for hundreds of years, the league can ensure that the economics of its return are not racially unjust by guaranteeing that the workers at their selected single site (whether it be in Las Vegas, NV or Bradenton, FL) receive fair pay and free access to testing.

The WNBA should enlist support from its sponsors

Engelbert’s corporate savvy has been emphasized as one of the advantages she brings to the WNBA. As part of the new CBA, she and the WNBPA established the WNBA Changemakers, which “brings together values-driven businesses who lead the way in the advancement of women and sports.”

A former CEO at Deloitte, Engelbert should again apply her corporate coercion skills to compel the league’s “values-driven” partners and sponsors to help provide material support for those vulnerable workers who will make the WNBA’s 2020 season, whatever form it takes, possible.

For instance, Nike, the sponsor of WNBA jerseys, proudly promotes itself as a progressive company. In its most recent commercial, the brand encouraged Americans to no longer ignore the nation’s pervasive racial injustices, insisting, “Don’t think you can’t be part of the change. Let’s all be part of the change.”

But Nike needs to do more than make consumers feel good about sporting the Swoosh. How will Nike translate its inspiring message into substantive practices?

A possible first step could involve partnering with the WNBA to ensure that essential but invisible workers receive respectful compensation and necessary care.

Might Microsoft, a WNBPA partner that has used it social media platform to “amplify voices from the Black and African American community” also work with the WNBA to turn its words into actions?

At this time, we will be using our platform to amplify voices from the Black and African American community at Microsoft.

In recent years, WNBA teams have organized initiatives that show an awareness of how those marked by intersecting identities intimately experience the inadequacies of American society, highlighted by the Los Angeles Sparks’ #WeAreWomen campaign and New York Liberty’s “Forgotten Behind Bars” event series.

A similar respect for a vulnerable people must be part of the operational infrastructure of the 2020 WNBA season.

The WNBA can model how to be ‘bigger than ball’

Of course, such allocations are far, far from a sufficient, comprehensive solution to racial injustices.

However, providing material resources to an overlooked and under-appreciated class of workers is a feasible, tangible way that a sports league and its sponsors can show that their support for black lives is more than symbolic. The prioritization of the health and well-being of these workers can demonstrate that the Sports Industrial Complex does not merely value the bodies of color that entertain primarily white fans who need to watch sports.

When writing about Elena Delle Donne’s support for black lives in her essay in The Players’ Tribune, Natasha Cloud suggested that her teammate “laid down the gauntlet, I think, for other athletes.”

Similarly, the WNBA can lay down the gauntlet for other sports’ leagues by modeling how to implement real, reparative practices that, while still incomplete, can begin to address the inequities from which people and communities of color disproportionately suffer.

The WNBA is signaling that it can competently, safely play basketball during a pandemic, a highly-complicated task. In contrast, fairly and justly compensating and caring for those people of color who will make this complicated return to play possible should be simple.