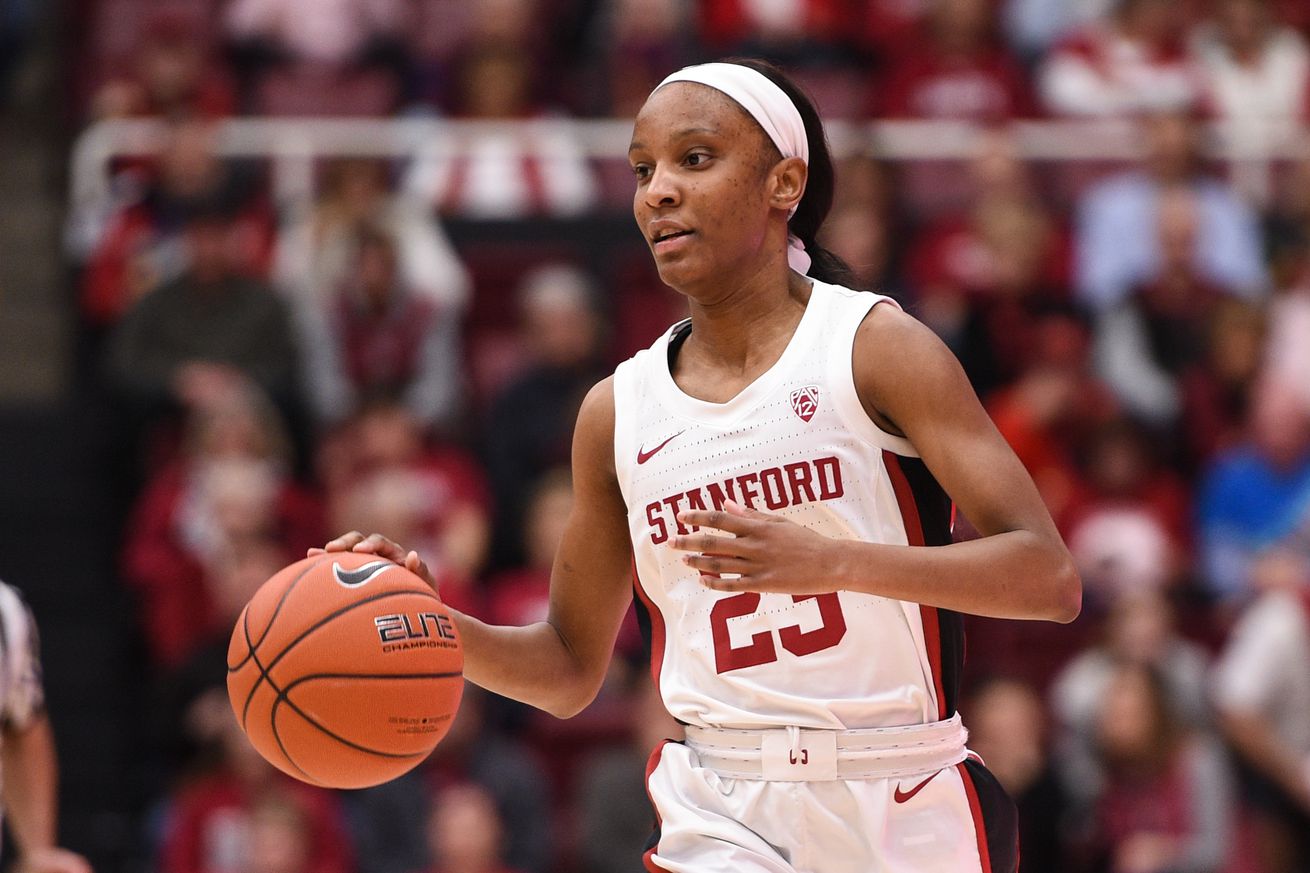 Kiana Williams helped lead Stanford to the Elite Eight in 2019 and had big plans for her team in 2020. | Photo by Cody Glenn/Getty Images

The duo of Kiana Williams and Lexie Hull led the Stanford Cardinal impressively in 2019-20. Stanford emerged as the next-best team after the top two spots in the Swish Appeal NCAA bracket were filled by the South Carolina Gamecocks and Oregon Ducks.

The Cardinal (27-6, 14-4 Pac-12) began the season at No. 3 in the AP Poll before moving up to No. 1 on Dec. 2 after the Louisville Cardinals beat the Oregon Ducks and the South Carolina Gamecocks beat the Baylor Lady Bears — both on Nov. 30.

Stanford (185 total points based on our formula) finished at No. 7 in the nation, but earned the No. 3 overall seed in the Swish Appeal bracket, comfortably ahead of the No. 4 overall seed (the Maryland Terrapins who had 143 points). The Cardinal impressed with seven wins over ranked teams.

This team. This season.

Wins over the No. 13 Gonzaga Bulldogs (Nov. 17) and the No. 9 Mississippi State Bulldogs (Nov. 30) gave Stanford a great non-conference resume, while it also benefited from the competitiveness of the Pac-12. The Cardinal notched three wins against the No. 14 Oregon State Beavers (Jan. 19, Feb. 21 and March 6) and defeated the No. 25 Arizona State Sun Devils (March 1) and No. 10 UCLA Bruins (March 7) as well.

After winning the Pac-12 Tournament last year, Stanford was unable to repeat, but did advance to the championship game again before losing to the No. 2 Oregon Ducks.

Highlights: Stanford takes down UCLA in the Pac-12 Tournament semifinals

The lofty achievements Stanford captured this year before the COVID-19 pandemic spelled the end of the NCAA Tournament can be credited, in large part, to stars Kiana Williams and Lexie Hull, both of whom were named to the All-Pac-12 Team.

Williams, a junior, led the team with 15.0 points and 3.8 assists per game, while Hull improved significantly during her sophomore campaign with 13.6 points and 6.0 rebounds per contest. Both guards had solid 3-point percentages (Williams with 34.7 and Hull with 37.0) and made 67 and 61 triples, respectively.

Amidst all the success, head coach Tara VanDerveer reached 500 wins in Pac-12 regular-season play, becoming the first coach in NCAAW history to reach that many wins in one conference.

The Cardinal could have been even better if they hadn’t lost guards DiJonai Carrington and Haley Jones to injuries. Carrington played in just five games, while Jones (the No. 1 HoopGurlz recruit for 2019) played in 18. Jones will be back next year, hoping to improve on her 11.4 points per game average, but Carrington has transferred to Baylor for her one remaining year of eligibility.

The Cardinals have the No. 6 recruiting class in the nation for 2020, highlighted by the No. 3 overall recruit: Cameron Brink, a 6-foot-4 forward.