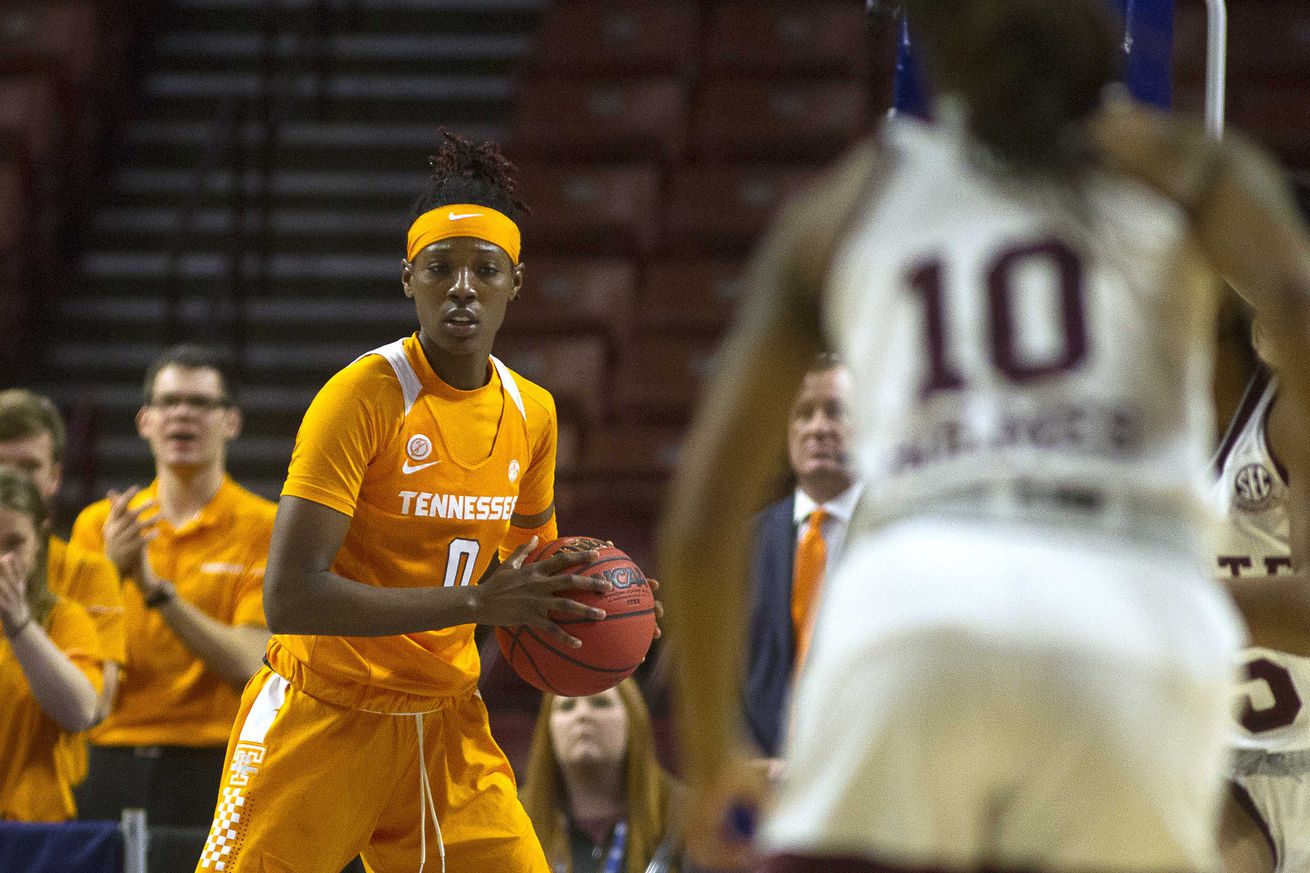 Rennia Davis looks to the lead the Lady Volunteers to victory over the Aggies. | Joshua S. Kelly-USA TODAY Sports

In an SEC doubleheader, the No. 6 Mississippi State Bulldogs look to continue their dominance on the road against the No. 18 Kentucky Wildcats. The No. 16 Texas A&M Aggies should have their star guard back in the lineup as they face the struggling No. 25 Tennessee Volunteers.

Sunday’s SEC doubleheader features the No. 25 Tennessee Lady Volunteers taking on the No. 16 Texas A&M Aggies, followed by the No. 6 Mississippi State Bulldogs playing against the No. 18 Kentucky Wildcats. Both games will be televised on ESPN2.

This showdown between the Lady Volunteers and the Aggies is important to each program for a number of reasons. The outcome will provide some separation in the conference standings, as both teams own 7-4 SEC records. The NCAA Tournament is just weeks away, so the result of this game will provide some clarity regarding where each team should be placed.

The Aggies’ leader, Chennedy Carter, will likely start today’s matchup after coming off the bench in the team’s 74-53 win over Vanderbilt, when she scored 18 points in 22 minutes. Carter had missed the previous seven games due to an ankle injury. She is an SEC Player of the Year candidate, averaging 21.3 points per contest this year.

Tennessee has dropped its last three games (all by 10 or more points) and desperately needs a win today. Rennia Davis will be a handful for the Aggies, as the junior leads the Lady Vols in scoring with 18.3 points per game. Davis is a masterful scorer in the post and can also step outside, where she shoots 33.3 percent from beyond the arc.

Mississippi State has won its last six games and will look to add another SEC win today. Freshman Rickea Jackson has been the go-to player for the Bulldogs. Jackson is coming off of a 21 point, 10 rebound performance against the Aggies. Mississippi State does not shoot the three-ball terribly well — just 32.7 percent as a team — but its work on the defensive end is what keeps the team on the winning side; the Bulldogs have held teams to 30 percent shooting from deep and force 21.8 turnovers per game.

Kentucky is coming off a big loss to the Arkansas Razorbacks but have dropped only two games at home all season. Rhyne Howard can it all as a scorer, leading the conference at 23.1 points per contest. If the Wildcats can offset the Bulldogs’ inside scoring with outside scoring and keep their turnovers to a minimum, they may have a chance at the upset today.