Preview: Griner, Mercury look to right the ship against Lynx 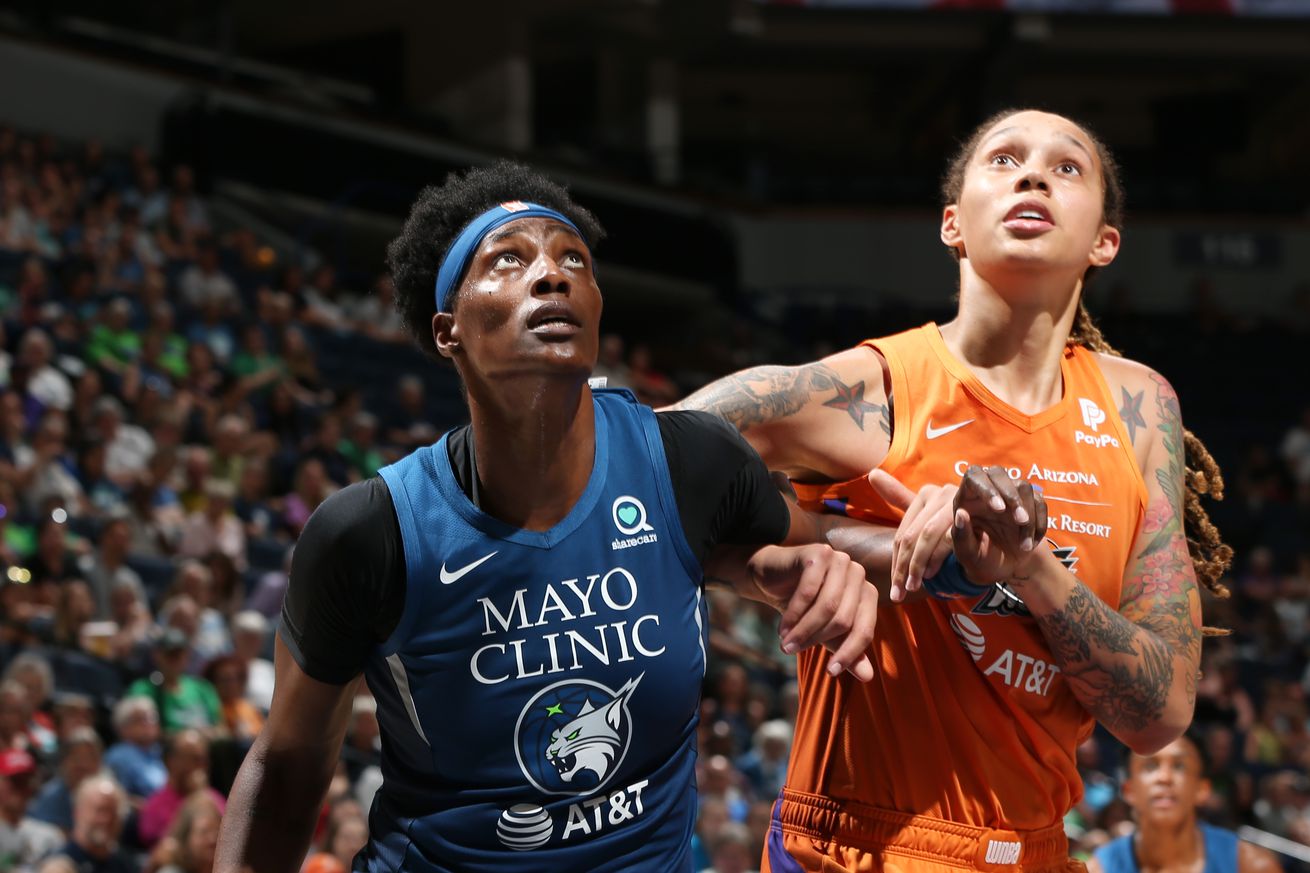 Brittney Griner (right) and Sylvia Fowles are two of the best centers in the game. Griner won’t have to contend against the WNBA’s all-time rebounder on Friday; Fowles is out indefinitely with a calf strain. | Photo by David Sherman/NBAE via Getty Images

Brittney Griner is averaging 17.7 points, 7.5 rebounds and 1.8 blocks, but the 6-6 Phoenix Mercury are struggling to keep up with the top teams in the league. On Friday, they will test their luck against the 8-3 Minnesota Lynx, who will be without superstar Sylvia Fowles. Plus, the 8-3 Los Angeles Sparks take on the 2-10 Atlanta Dream and the 4-7 Washington Mystics face the 4-8 Dallas Wings.

The Phoenix Mercury have lost three of their last four games, including one against the sub-.500 Dallas Wings. With legend Diana Taurasi at close to full strength and two-time Defensive Player of the Year Brittney Griner and Skylar Diggins-Smith playing well, we pretty much know what to expect from the Mercury.

Yet, their 6-6 record reflects how the Mercury are not meeting expectations.

In contrast, the Minnesota Lynx have an assortment of wild cards outside of ever-consistent center Sylvia Fowles, who will not play against the Mercury due to a strained calf. Napheesa Collier is a second-year star who so far is playing even better than she did during her Rookie of the Year campaign. Plus, the Lynx’s story lines this season have been about unproven players stepping up. Those breakout stars — most notably, rookie Crystal Dangerfield — have made the Lynx a better team than the Mercury.

When the teams face each other on Friday in their first meeting of the 2020 season (10 p.m. ET on CBS Sports Network), the Mercury will be looking to get out of their slump while the Lynx will try to keep pace with the other teams near the top of the standings. If the Lynx win, they will be tied for second place with the Las Vegas Aces and possibly the Los Angeles Sparks if the Sparks defeat the Atlanta Dream. But Minnesota will have to get the job done without its best player in Fowles, which won’t be an easy task against Griner, a 6-foot-8 center who has been to six All-Star Games.

The Sparks will look to extend their five-game winning streak against the Dream, who have accumulated nine consecutive losses. With Chennedy Carter (ankle) still out, Atlanta is vulnerable. Los Angeles, however, is living up to the lofty goals set at the season start.

This is a big game for both teams. Dallas is half a game behind Washington and Connecticut in the battle for the final playoff spot. Washington hopes to add to the momentum of breaking its seven-game losing streak on Wednesday. Dallas, meanwhile, caught people’s attention when they upset Phoenix on August 16. The Wings then suffered a subsequent loss to the Lynx.

Key to the matchup: Blake Dietrick. Filling in at point guard for Chennedy Carter, Dietrick is averaging 21.8 minutes per game for the Dream and turning the ball over less often than Carter. Los Angeles is way ahead of Atlanta in steals and turnovers forced. Dietrick needs to take care of the ball if the Dream are to have any hope of winning. She also needs to knock down some threes to help her team keep pace with the Sparks’ 40.7 percent shooting percentage from distance.

Highlights: Blake Dietrick is quietly doing a good job for the Dream

Key to the matchup: Hot shooting. The Mystics are ninth in the WNBA in both field goal percentage (42.6) and 3-point percentage (33.6), while the Wings are 11th (41.0) and 10th (31.8), respectively. However, the Wings turn the ball over less than any other team in the league, while the Mystics are in middle of the pack in that department. Washington will need to out-shoot Dallas if the Wings take good care of the ball, per usual.

How to watch: CBS Sports Network and FOX Sports North Plus

Key to the matchup: Can the Lynx contain Brittney Griner without 6-foot-6 center Sylvia Fowles? Without Fowles, Kayla Alexander (6’4”) is the next tallest player on the Lynx’s roster and only averages 6.4 minutes per game. Fowles went down early in a game on August 13, which resulted in a Lynx loss to the Aces. Minnesota has won its last two games without Fowles, but those victories came against the 1-11 New York Liberty and Dallas. Griner is an MVP-caliber player and if she is able to dominate against 6-foot-3 forward Damiris Dantas and company, the Mercury may be able to come away with the win.