Preview: It’s Louisville vs. a one-of-a-kind talent and Team USA 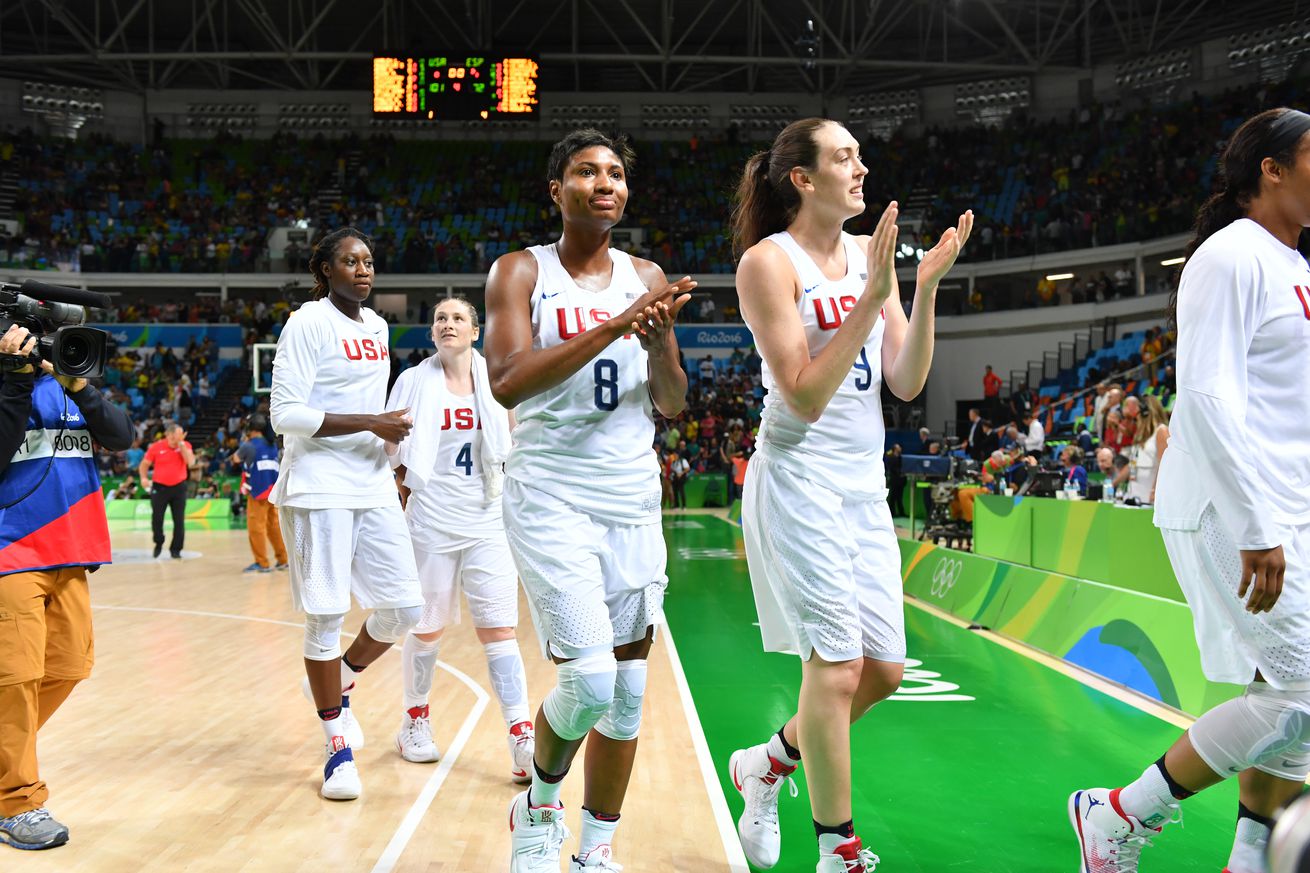 Angel McCoughtry (No. 8) as seen at the Rio Olympics in 2016. | Photo by Jesse D. Garrabrant/NBAE via Getty Images

Head Coach Jeff Walz has the Louisville Cardinals poised to make a deep tournament run in March, but first must face an old protégé in Angel McCoughtry, who returns as a member of Team USA. Dana Evans, Kylee Shook and Jazmine Jones lead the Cardinals into battle.

The USA Basketball Women’s National Team will face the No. 5 Louisville Cardinals today at 2 p.m. ET in the final game of its 2019-20 college circuit.

It will be a homecoming for Atlanta Dream and Team USA star Angel McCoughtry, who went to Louisville and is the program’s all-time leading scorer. McCoughtry sat out the 2018 WNBA playoffs and the 2019 season with a knee injury and was cleared to play again back in November. She has been playing for Russian club Dynamo Kursk for the past month, but today’s game will be her return to American basketball.

Highlights: McCoughtry playing in 2018 before her injury

The Cardinals recently picked up their 20th win of the season and have now had ten 20-plus win seasons in a row. They are led this year by junior sharpshooter and dynamic point guard Dana Evans, who is leading the team with 18.7 points per game. Alongside her are seniors Kylee Shook, the team’s rebounding and blocked shots leader with 7.4 boards and 2.5 blocks per game, and Jazmine Jones, who is second on the team with 14.2 points per game.

The Cardinals’ biggest win of the season so far came on the final day of November when they knocked off then-No. 1 Oregon Ducks, who had defeated the national team on Nov. 9. Louisville turned around and lost to an unranked Ohio State Buckeyes team in its very next game on Dec. 5, but has proceeded to rattle off 13-straight wins after that setback.

The Cards will look to prepare themselves for their next game, which is against the No. 14 Florida State Seminoles on Thursday, Feb. 6. Louisville is trying to hold onto its one-game lead over the No. 7 NC State Wolfpack in the ACC standings and, in the long run, it hopes to earn a No. 1 seed for the NCAA Tournament.

Team USA star Diana Taurasi, who is still dealing with back issues, sat out when the national team played her alma mater (UConn) last week. Team USA won that contest 79-64 with Minnesota Lynx center Sylvia Fowles scoring a team-high 19 points. New York Liberty center Tina Charles led the team in rebounds (nine) and assists (five). After UConn won the second period 20-10, the game was tied at halftime. Team USA only led by one entering the fourth quarter but dominated the final frame 27-13 to pull away.

The national team roster for the Louisville game also includes Las Vegas Aces forward A’ja Wilson (15.8 points per game) and Los Angeles Sparks forward Nneka Ogwumike (15.5 points per game) who were the most consistent scorers for Team USA in 2019. Wilson missed the UConn game after getting her wisdom teeth taken out. Meanwhile, Fowles (13.6 points per game) has played in all 14 games on the 2019-20 slate.

Team USA faced the Stanford Cardinal, Oregon State Beavers, Texas A&M Aggies and Oregon in the first part of its college circuit, in November. It defeated everyone except Oregon before competing in an Olympic pre-qualifying tournament in Argentina later in November. The national team has already qualified for the 2020 Tokyo Olympics because it won gold at the 2018 FIBA World Cup.

How to watch/listen: ESPN/Cards Radio 790 KRD