Preview: Sky must get playoff-ready vs. Dream 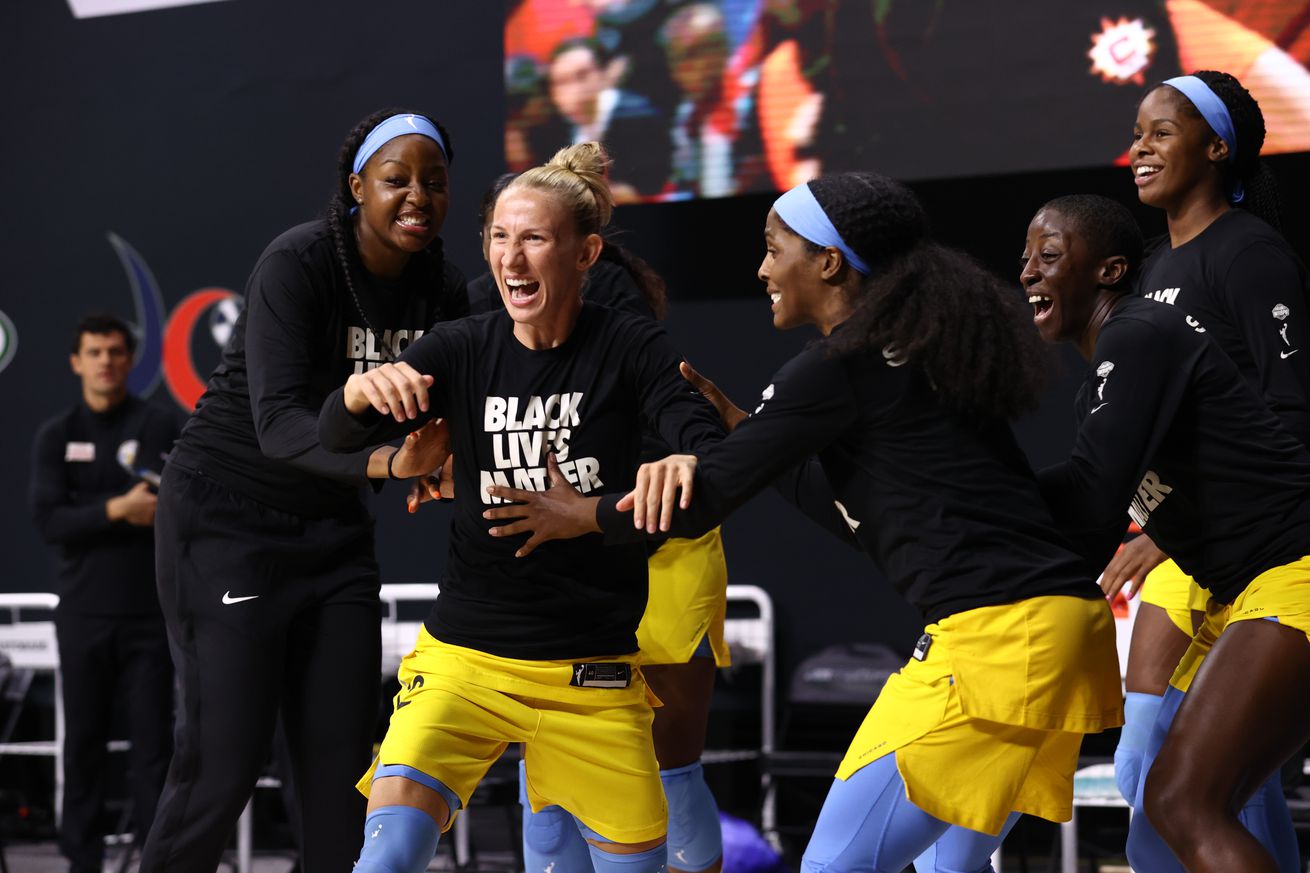 To be a threat in the playoffs, the Chicago Sky must maintain the energy they show during introductions for 40 minutes. | Photo by Ned Dishman/NBAE via Getty Images

With the playoffs fast approaching, the Chicago Sky (11-9) need to stop their dive. A spunky Atlanta Dream (5-14) team could force them to stumble. In other action, the Phoenix Mercury (12-8) and the Connecticut Sun (10-10) meet again and the Dallas Wings (7-12) and Seattle Storm (16-3) will try to secure their spots at the bottom and top of the playoff picture, respectively.

After beginning the season 11-4, the Sky have since tumbled to a 2-5 record, with especially disappointing losses to non-playoff teams in the New York Liberty and Washington Mystics. Currently on a three-game slide, Chicago struggles are explainable, as they have been severely hampered by the absences of Azurá Stevens and Diamond DeShields.

Wednesday night at 8:00 p.m. ET (CBS Sports Network), the Sky meet the Atlanta Dream (5-14) in a game that while, not a must-win, should serve as a playoff preparation laboratory.

Chicago head coach James Wade can play a playoff-like rotation in order to sharpen his squad in anticipation of their do-or-die playoff contest. Or, knowing that the Sky are locked into a single-elimination first-round game, Wade could reduce the playing time of his key contributors, giving extra time to reserves in hopes that they might show a playoff-ready spark.

In particular, Chicago needs Kahleah Copper to rediscover her groove. Throughout the 2020 season, Copper has proven herself to be more than capable of assuming a greater offensive responsibility. However, her inefficiency in her last three games suggests she is tiring. That she played a season-high 37 minutes on Sunday further indicates that a temporarily reduced load, rather than more shots and more minutes, might be what she needs in preparation for the playoffs.

Regardless, expect the Dream to present the Sky with a tough test. Despite a season marred by illnesses and injuries, head coach Nicki Collen’s group has scraped and fought, even on those rough nights when their shots refuse to fall. And, on the few nights when everything has come together, the Dream have looked like a playoff-caliber team, with Chennedy Carter, Courtney Williams and Betnijah Laney forming a threatening scoring trio.

It’s a back-to-back rematch! In Monday night’s makeup game, DeWanna Bonner led her new team past her former team, piloting the Sun back into the playoffs while also snapping the Mercury’s six-game winning streak. As the fourth seed remains in play for the Mercury, Diana Taurasi should be highly incentivized to get revenge on her old friend.

On Friday night, Jewell Loyd drained a game-winning 3-pointer with less than one second left, giving the Storm the win over the Los Angeles Sparks. On Sunday afternoon, Arike Ogunbowale swished a step-back 3-pointer to take the Wings into overtime, where they would finish off the Washington Mystics. Might we see more big-time 3-point bombs in this battle between the teams at the top and bottom of the playoff standings?

Key to the matchup: While DeWanna Bonner was, understandably, the headlining star from Monday night’s matchup between these two teams, Brionna Jones also had a very solid game. The Sun’s starting center tallied 10 points, three blocks and three steals, a plus-21 confidence-boosting performance against a Phoenix frontline of Kia Vaughn and Brianna Turner that had played well since the departure of Brittney Griner. Even as Jones’s traditional, ground-bound style is antithetical to the precepts of modern shooting-and-spacing basketball, the still-thin Sun need reliable contributors for the playoff crucible. Jones can be just that, and maybe a little more, for head coach Curt Miller.

Breezy shares her story of growing up with parents who were Hometown Heroes working in law enforcement. She shares her perspective on supporting police while also wanting to hold them accountable.#HometownHeroes x #4TheValley pic.twitter.com/5BugSRXkZI

How to watch: CBS Sports Network, The U

Key to the matchup: Turnovers trouble both of these teams, with the Dream averaging 15.7 per game and the Sky averaging 16.0. The Sky surrender more points off their turns, giving up 18.1 points off turnovers to the Dream’s 16.4 points. When it comes to cashing in on opponents’ fumbles, both teams are middle of the pack, as the Dream have scored an average of 17.4 points off turnovers while the Sky have averaged 16.1 points. Whichever team exploits, rather than is exploited by, turnovers should be in position to win. That both squads have shaky ball handlers behind their starting point guards makes this a hard outcome to forecast.

Feature: The Sky’s Gabby Williams discusses the emotions, yet resolve, of WNBA players surrounding the walkout

“It’s really tough for us all to keep going and stand up in the middle of this when we’re hurting ourselves as well, and we still have to fight for others. … Being with all these powerful women I think has kept us all going.”

Key to the matchup: When the Wings met the Storm a little less than one month ago, Satou Sabally was sidelined with a sore back, preventing a showdown between the Unicorn and Flash. That Natasha Howard has rounded into full Flash form in the intervening weeks makes this delayed matchup between two of the WNBA’s most versatile, dynamic athletes even more exciting. In order to maintain their hold on the eighth seed, the Wings will need Sabally to complement Arike Ogunbowale with a Unicorn-level performance. However, expect the elder Howard to use her defensive skills and offensive smarts to gain an edge.

Learn the meaning behind @Piphdagreat10‘s custom sneakers she donated to our Kicks For Equality Auction.

All proceeds benefit the @NAACP_LDF