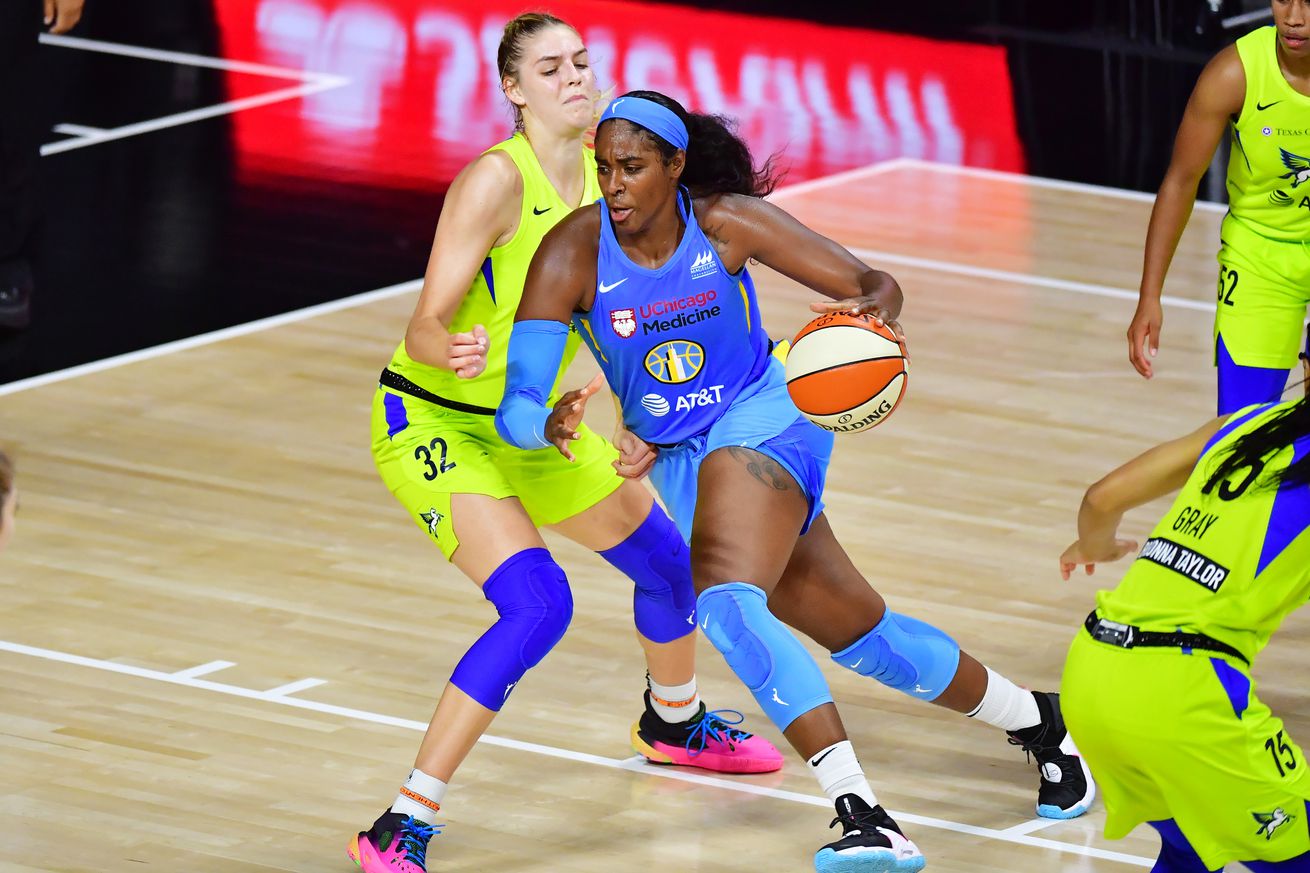 Cheyenne Parker (with ball) drives to the basket during Tuesday’s Chicago Sky game against the Dallas Wings. | Photo by Julio Aguilar/Getty Images

Cheyenne Parker recorded 15 points, seven rebounds and four steals and Courtney Vandersloot notched 10 assists as the Chicago Sky eked out another close win, this time against the Dallas Wings. Plus, the Phoenix Mercury came back to defeat the Atlanta Dream and the Seattle Storm handled the Connecticut Sun.

The Chicago Sky continued their good performance in close games with an 82-79 win over the Dallas Wings on Tuesday night at IMG Academy in Bradenton, Florida. The Sky, who improved to 4-1 to remain in a first-place tie with the Seattle Storm, are 3-1 in games decided by three points or less this season.

Cheyenne Parker was the late-game hero for the second contest in a row as she forced a Satou Sabally turnover with 4.1 seconds remaining, allowing Chicago to run the clock down to 0.1 seconds and hold on for the win. Parker also made the game-winning layup to defeat the Washington Mystics 88-86 on Saturday.

In Tuesday’s game, which was close throughout, a 3-pointer from Dallas’ Kayla Thornton with 1:12 to go cut Chicago’s lead to 80-77 and an Arike Ogunbowale layup with 13.5 seconds remaining made it 80-79.

With 8.4 seconds to go, Thornton stole the ball from Allie Quigley and Dallas called a timeout with a chance to take the lead. But Parker’s steal led to Courtney Vandersloot free throws that put the Sky up three and there was nothing the Wings could do with 0.1 seconds left on the clock.

Dallas’ scoring was not as balanced with Ogunbowale recording 26 points on a 50 percent shooting night from the field. Both statistics marked season highs for the star guard out of Notre Dame, but she continued to struggle from beyond the arc, going 1-of-6.

Dallas (2-3) will test its luck against the winless Connecticut Sun on Thursday, while Chicago will take on a fellow team with a winning record in the 3-2 Phoenix Mercury later that night.

Diana Taurasi finished with 20 points, six assists and six rebounds to lead Phoenix to victory after it was down six entering the fourth quarter. Meanwhile, Chennedy Carter broke the 20-point threshold for the first time in her young career with 26 and traded baskets with the Mercury late in a valiant effort that fell short as the Dream dropped to 2-3.

Seattle takes control in the third, holds on for comfortable 87-74 win over Connecticut

Breanna Stewart had 22 points and five blocks for the Storm, who trailed by three after the first quarter and by two at the break. Connecticut’s DeWanna Bonner (five points) finally cooled off, while Brionna Jones stepped up with a career-high 20 points in defeat. Alyssa Thomas added 15 points and 13 rebounds for the Sun.