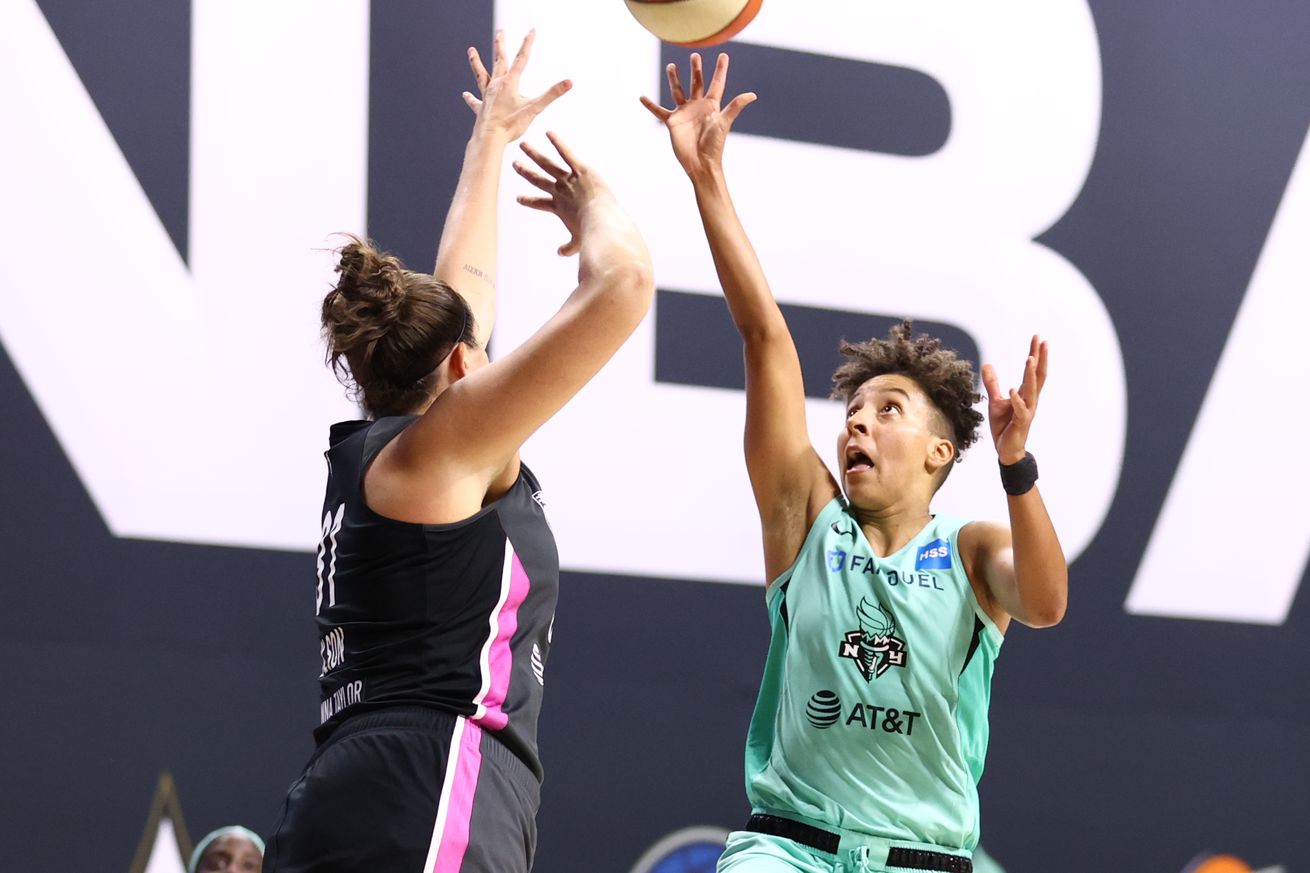 Layshia Clarendon (right) goes up for a floater with the clock winding down. | Photo by Ned Dishman/NBAE via Getty Images

The 2-12 New York Liberty defeated the 10-5 Chicago Sky thanks to big performances from Layshia Clarendon and Amanda Zahui B. Meanwhile, the 11-3 Las Vegas Aces evaded a comeback by the 5-10 Dallas Wings and the 12-3 Seattle Storm snapped their two-game skid by besting the 5-9 Indiana Fever.

Layshia Clarendon drew contact from Stefanie Dolson on a missed floater with 0.3 seconds remaining and knocked down both free throws to give the last-place New York Liberty a 101-99 victory over the fourth-place Chicago Sky on Tuesday night at IMG Academy in Bradenton, Florida. Chicago is now tied with the Minnesota Lynx for the final first-round bye slot and is two games out of first place.

Amanda Zahui B led the Liberty with 22 points, 12 rebounds, three steals and three blocks, while Clarendon finished with 17 points and five assists. Allie Quigley tied a career high with 29 points in defeat. Her wife and teammate Courtney Vandersloot picked up 15 points to go along with nine helpers.

Vandersloot’s ninth assist led to a game-tying 3-pointer from Dolson with 20 seconds left after the Liberty had led by as much as eight during the fourth quarter. A Kiah Stokes layup with 31.8 to go put New York up by three.

The Sky led by seven after the first quarter, but the Liberty won the second 24-20 and the third 32-26 to put them up three entering the final frame.

New York is still last in the league in 3-point percentage, but coach Walt Hopkins’ offensive method of shooting a lot of threes paid off on Tuesday. The Liberty went 14-of-30 (46.7 percent) from beyond the arc with multiple triples coming from five players. Zahui B was 4-of-7 and Jocelyn Willoughby was a perfect 3-of-3, while Clarendon, Stokes and Paris Kea each had two treys.

Chicago attempted 16 more free throws than New York and made 12 more, but it wasn’t enough to overcome New York’s 55.9 to 46.5 percent advantage from the field.

The Sky will take on the Indiana Fever at 7 p.m. on Thursday and the Liberty will tip off with the Dallas Wings an hour later. Chicago is still in the battle for one or two byes, while New York needs to start stringing together some wins if it wants to snag a playoff spot. Right now the Liberty are three games out of eighth place with eight games to go.

Vegas’ MVP candidate A’ja Wilson scored 26 points and hauled in nine rebounds in this one, while rookie Satou Sabally’s career high 28 points and 11 rebounds went in vain. The Aces were 32-of-37 from the free throw line (86.5 percent), while the Wings were 15-of-20 (75.0 percent).

Sabally was fouled on a 3-pointer with 15.9 seconds left and made all three free throws to cut the Las Vegas lead to four. She then made a difficult fadeaway three from the left corner to cut it to two with 2.8 ticks remaining. But two Lindsay Allen free throws with 1.5 seconds to go iced the game for the Aces.

Breanna Stewart was good for 27 points, nine boards, four assists, four steals and two blocks, while Kennedy Burke’s 17-point performance for Indiana was not enough. The Storm’s 24-12 edge in the second quarter put them up by 11 at halftime and the Fever never got closer than nine in the second half.

An MVP type night as @breannastewart does it all and is your @aotwcasino Player of The Game! #StrongerThanEver pic.twitter.com/GTYiF1a8F6