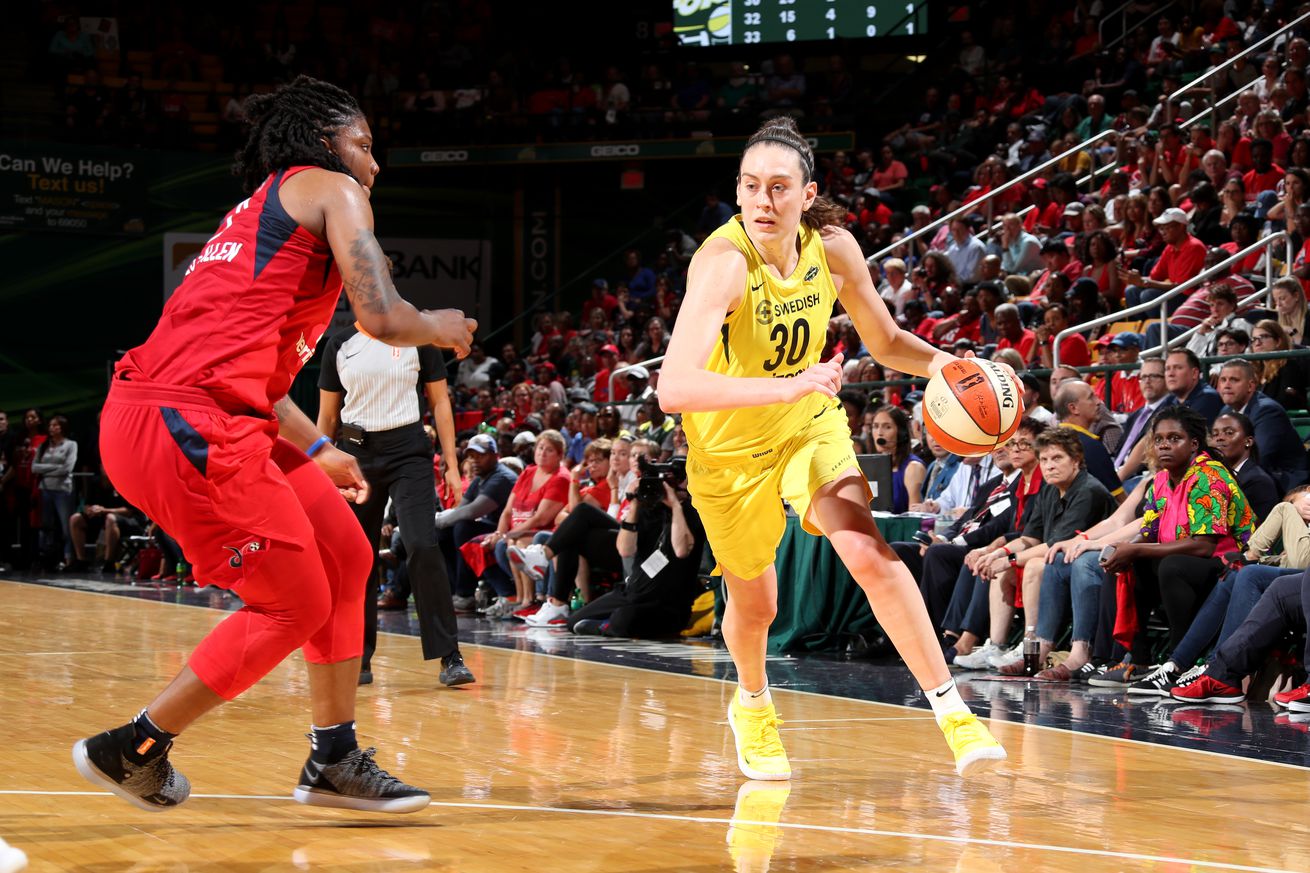 Breanna Stewart (with ball) was the 2018 regular-season and Finals MVP. | Photo by Stephen Gosling/NBAE via Getty Images

Breanna Stewart is back for the Seattle Storm. That means expectations return to what they were immediately after the 2018 season, when they won the WNBA championship. Can Natasha Howard and Jewell Loyd help Stewart bring the team back to the top?

A handful of players have decided to opt out of the season due to COVID-19 and/or a desire to use their platform to continue the battle against racism. And when the WNBA season does take place, there will be no fans in attendance, and all the games will be played at one location in Bradenton, Florida, to avoid further spreading of the coronavirus.

The Seattle Storm surprised a lot of people with an 18-16 regular-season record last year, despite not having stars Breanna Stewart and Sue Bird, both of whom were out with injuries. They went on to lose in the second round of the playoffs to the Los Angeles Sparks. This year they will be coached by Gary Kloppenburg instead of Dan Hughes, who is sitting the season out as a health precaution. Seattle added free agent Epiphanny Prince to a roster that returns not only its top seven players from 2019, but Stewart and Bird as well.

Potential problems for the Storm

Bird is the oldest player in the WNBA, but she averaged a career-best 7.1 assists per game in 2018, and to this day has maintained her streak of 16 straight seasons averaging at least 10 points per game.

Before a knee injury sidelined her for all of 2019, Bird was a key member of the Storm’s 2018 championship run. But since Stewart, Jewell Loyd and Natasha Howard are continuing to improve, the pressure on Bird should be even less in 2020.

However, the leadership role that the 11-time All-Star possesses is still invaluable to the Storm, and she could be somewhat of an X-factor this season. Bird may not need to put up gaudy stats, but she will need to make an impact of some kind if Seattle is to compete with teams who have improved their rosters since 2018.

Can Natasha Howard have the same impact as last year with Breanna Stewart back on the court?

Howard was in the MVP conversation last year, which was a huge deal for a player who struggled to find her place in the league until joining the Storm in 2018. She upped her numbers almost across the board in 2019, including an improvement from 13.2 points per game to 18.1. Add to that 8.2 boards and 2.2 steals per game and you can understand why she was selected to the All-WNBA First Team and named Defensive Player of the Year.

Howard is similar to Stewart with her all-around forward skills, though she is not a great 3-point shooter. The duo started together in 2018 and will likely start together again in 2020. Howard’s numbers will almost certainly dip because Stewart is going to take back a great deal of the scoring load. It will be interesting to see how big that dip is. Numbers aside, Howard will need to play a huge role for the Storm this season.

The Storm were tenth in the league in scoring last year

Speaking of the scoring load, the Storm were better than just two teams (the Dallas Wings and Atlanta Dream) in points per game in 2019 with 74.8. Stewart being out was a big part of that, but it was still a discouraging stat for a team that played well in a lot of other areas and surprised people with a decent overall season. Look for the players who were a part of that lackluster offensive display last year to have a chip on their shoulders.

Potential promise of the Storm

Breanna Stewart is back

Stewart, statistically speaking, is the best player in the WNBA. If you look at her best averages for a single season and her career averages and also consider the fact that she is still on the rise at age 25, she is comfortably ahead of any other player in the league. A ruptured Achilles suffered overseas after her amazing 2018 season put her rise on hold, but she returned to action with Team USA in 2019-20 and looked good. If she is at full strength during the 2020 WNBA season, the Storm may very well be able to live up to the high expectations surrounding them.

Stewart should revitalize Seattle’s offense, which is scary for opponents if you consider the fact that they were the best defensive team in the league last year. The Storm managed 9.5 steals per game in 2019 and allowed 75.1 points per contest. Jordin Canada led the team with 2.3 steals per game and Howard was second with 2.2. Those two plus Loyd, Alysha Clark, Mercedes Russell and Sami Whitcomb are the six players on the Storm who saw the most playing time last year. All six averaged at least one steal per game in 2019, and all six are back with the team for 2020.

Jewell Loyd is still on the rise

Loyd was the No. 1 overall pick out of Notre Dame in 2015. She has played her entire career with Seattle and averaged a career-best 17.7 points in 2017. Her career bests for rebounds and assists per game are 4.6 and 3.7, respectively. She is a crafty guard with the ability to evade defenders and finish at the basket, and her career 3-point percentage is a solid 34.1 percent. That percentage was 41.3 percent for her as a freshman with the Fighting Irish and 38.6 percent in 2017, so it could improve in her sixth pro season.

In 2020 Loyd will be a key member of Seattle’s big three along with Stewart and Howard. With the Las Vegas Aces, Los Angeles Sparks and Washington Mystics having awesome combinations of stars as well, it’s good for Storm fans to know that Loyd is only going to get better.

The Storm should be in the mix at the top of the standings. Having the single greatest star in the league bodes well for them and Stewart will have a chance to prove her greatness against the other top teams while in pursuit of her second WNBA championship.