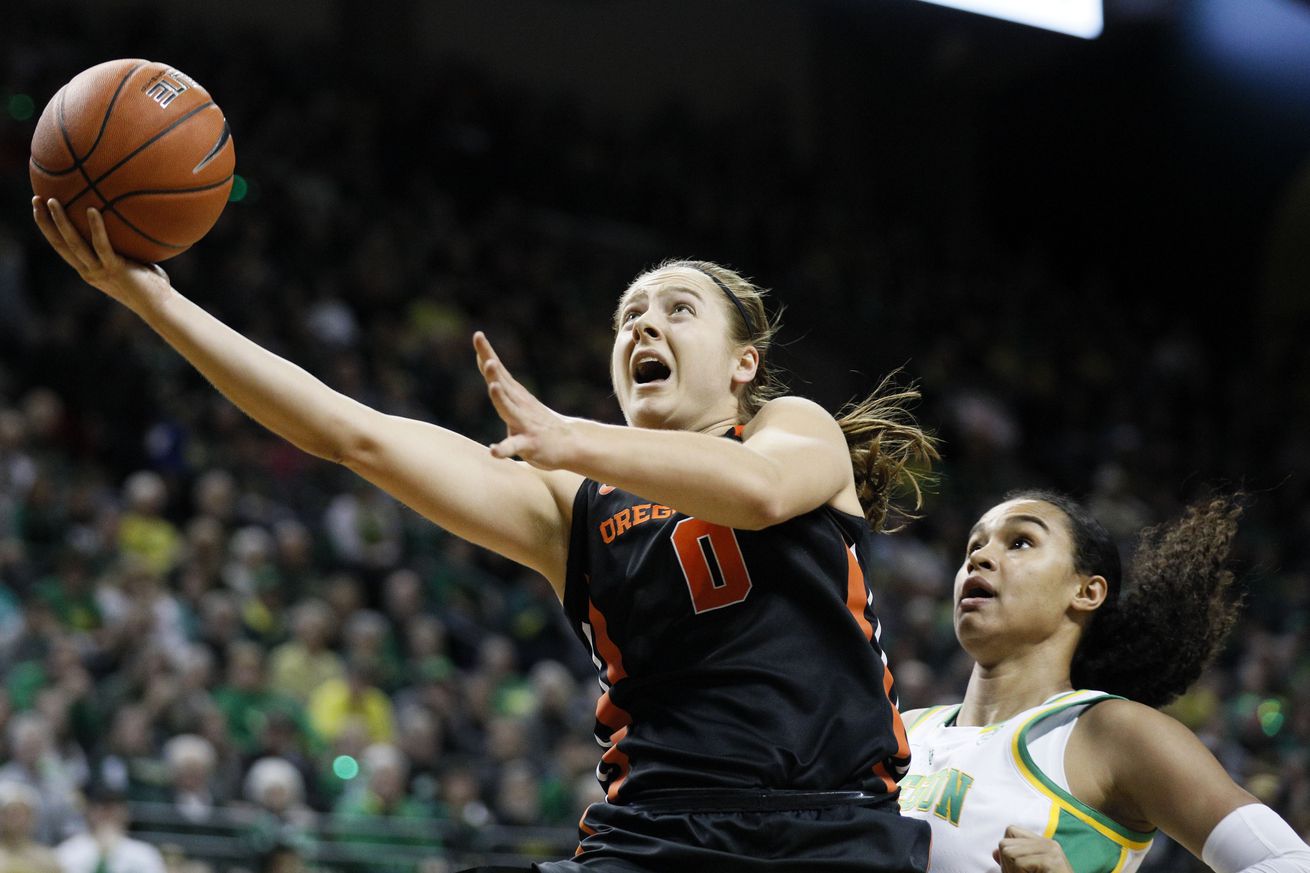 Mikayla Pivec is the latest player to flourish under Oregon State Beavers head coach Scott Rueck, whose system emphasizes ball movement. Pivec has made significant strides in her game and this season blossomed into one of the top players in the Pac-12.

The Oregon State Beavers have become a perennial force in the Scott Rueck era. Since 2014, the Beavers, now ranked ninth in the AP Poll, have never missed the NCAA Tournament. They’ve made it to at least the Sweet Sixteen in each season since 2016.

One might point to Rueck’s steady, even-keeled coaching style and emphasis on process as keys to the program’s success, but he has a talented roster that can execute as well. The Beavers have had plenty of pro-worthy players pass through the program during Rueck’s tenure. This season, they’ve got another in Mikayla Pivec — a player who has added something new to her game each season.

Pivec has become a box score beast, contributing in just about every category on a nightly basis. Letting one player hog the spotlight isn’t in Rueck’s philosophy but his star senior has shone regardless — almost certainly raising her WNBA Draft stock.

Pivec was named to the All-Pac-12 Team last season after averaging better than 15 points and nine rebounds per game. She earned preseason all-conference honors heading into her senior season. Although competition will be stiff for a second straight All-Pac-12 honor, Pivec has continued stuffing the stat sheet (14.5 points, 9.5 rebounds, 5.0 assists). It certainly wouldn’t be an indictment of her own play if she’s snubbed.

Pivec also has some experience with USA Basketball. She participated in the 2019 Pan American Games, starting all five games for Team USA and earning a silver medal.

How she helps the Beavers

What immediately jumps out about Pivec is her rebounding ability. She’s not a physically overwhelming player, but she has an outstanding nose for the basketball, evidenced by two straight seasons of a total rebounding percentage in the 90th percentile or higher (Her Hoop Stats). Pivec led a 26-win Beavers team in that department last season, and ranks second on the team (to center Taylor Jones) in 2019-20.

Pivec is a capable scorer but she isn’t known for big scoring efforts because Oregon State’s style of play doesn’t lend itself to gigantic individual performances. Still, Pivec is both consistent and efficient. She has scored in double figures in all but two games this season, and she is doing it on an effective field goal percentage of 57 percent.

Rounding things out for Pivec is her playmaking, which has improved dramatically during her time at Oregon State. She has increased her assist rate from 19.4 percent as a junior to 30.4 percent as a senior, and her five assists per game rank 43rd in the country. While Destiny Slocum remains the Beavers’ starting point guard, Pivec’s improvement as a playmaker has added an extra dimension to the offense, allowing Slocum to play off the ball more frequently.

Pivec’s growth into an all-around player has been quite enjoyable to watch. As far as WNBA Draft prospects go, she’s definitely one of the more versatile players in this year’s class. Her full arsenal was on display recently against Utah.

Highlights: Pivec piles on vs. Utah

Beavs went ballin’ for the dub. @BeaverWBB beat Utah 77-65 in SLC after a 20-point and 12-rebound game from Mikayla Pivec. pic.twitter.com/oB3uaftiDc

Oregon State’s brutal January — two losses to rival Oregon and one to Stanford — may be over. Yet, given the strength of the Pac-12, there are still plenty of intriguing games to come. On Feb. 17, the Beavers play UCLA on the road (ESPN2). They also play Arizona on Feb. 9 and Stanford on Feb. 21 (both on Pac-12 Network).