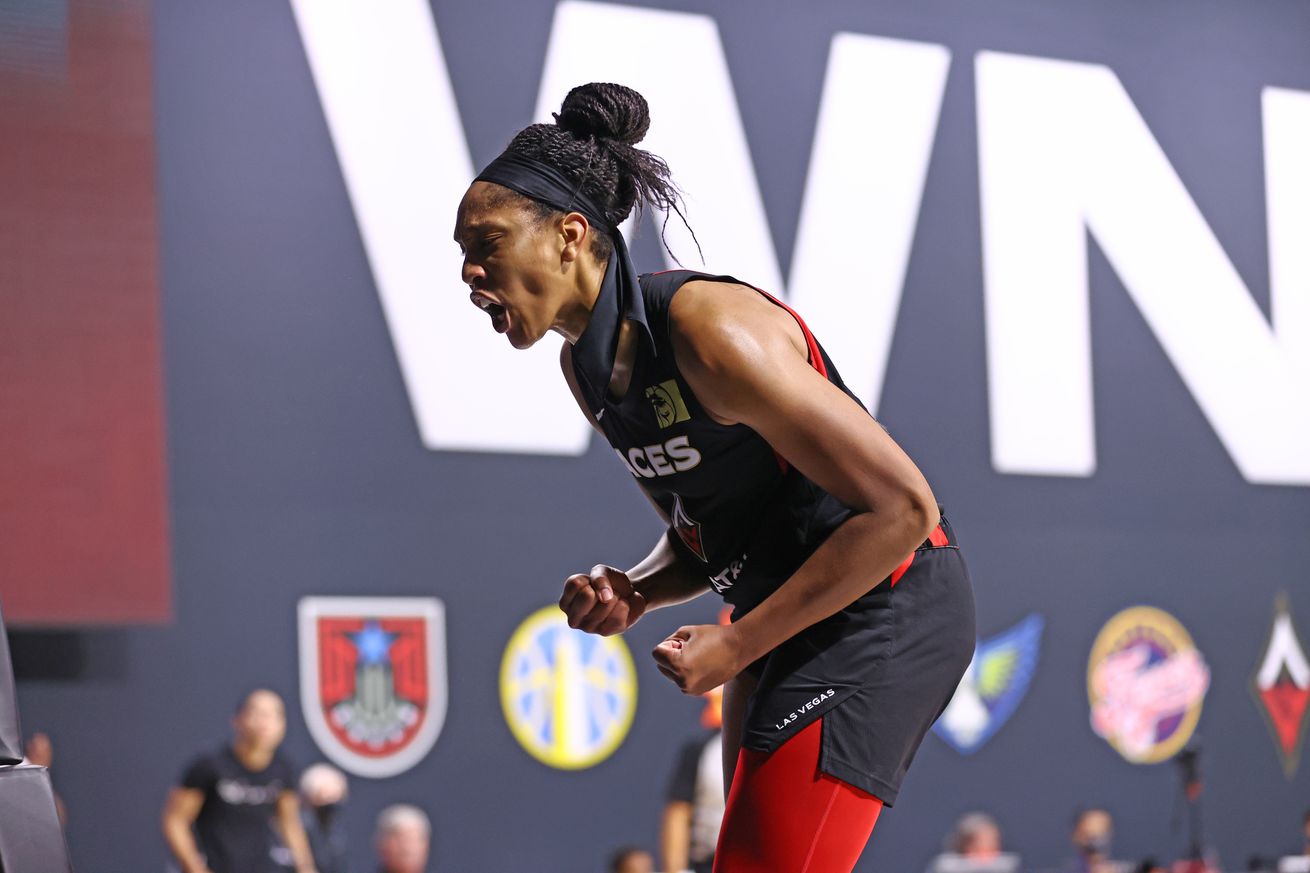 A’ja Wilson and the Las Vegas Aces hung tough in a five-game series. | Photo by Ned Dishman/NBAE via Getty Images

2020 WNBA MVP A’ja Wilson proved to be the best player in the Las Vegas Aces’ semifinals series against the Connecticut Sun. Because of her, the Aces are moving on to face the Seattle Storm in the WNBA Finals.

During Game 5 of their WNBA Semifinals series against the Connecticut Sun on Tuesday night, the No. 1 Las Vegas Aces put the ball in Angel McCoughtry’s hands on their last two offensive possessions. McCoughtry missed two midrange looks that would have made it a two-possession game but a three-point lead was all the Aces would need.

With the clock winding down in the fourth quarter, Danielle Robinson forced the Sun’s DeWanna Bonner to put her foot inside the 3-point arc and toss up a difficult 2-pointer that didn’t go in.

With that, the celebration began at IMG Academy in Bradenton, Florida.

Regular-season MVP A’ja Wilson went 9-of-10 from the free-throw line in the fourth quarter after not reaching the stripe in the first three quarters. She repeated what she did in Game 2, with an MVP-style takeover — the only difference being the lack of and-1s during this key stretch.

Wilson finished with a game-high 23 points to go along with 11 rebounds, four assists and three blocks.

McCoughtry notched 20 points and three steals and poked the ball away from Bonner with 1:14 minutes remaining in regulation right before one of her midrange misses. In spite of the miss, McCoughtry interrupted Connecticut’s first attempt to cut the Aces’ lead to one point after the score became 66-63 on Wilson’s final made free throw. Connecticut guard Jasmine Thomas then missed a 3-pointer with 39.5 seconds remaining before Bonner took the bad shot at the buzzer.

The Sun led by as many as 16 points but the Aces went on a 13-0 run from the 7:47-minute mark to the 2:50-minute mark in the third. The game was tightly contested for the entirety of the fourth. Connecticut had a lot of momentum at times and outscored Vegas 14-2 on fast-break points. However, the Sun’s glaring 3-of-19 effort from distance hurt them in the end.

Connecticut led first-quarter scoring 30 points to Vegas’ 17, so it was quite surprising to see the game finish with low scoring from both teams. The Sun had 15 turnovers and the Aces had 18 and both finished with field-goal percentages below 40.

Alyssa Thomas was the best player for the Sun in the series and recorded 22 points and 10 rebounds in Game 5. Bonner was good for 15 points, eight boards, six assists, five steals and three blocks. Brionna Jones, one of the most-improved players in the league this year, chipped in seven points, 12 rebounds and four steals.

Robinson and Carolyn Swords pulled down 10 rebounds each for the Aces.

Friday’s Game 1 of the WNBA Finals will feature the preseason favorite, Seattle, and a well-rounded Las Vegas team that swept the Storm 2-0 in the regular season. The Aces will be without two-time Sixth Woman of the Year Dearica Hamby (knee), but Wilson and McCoughtry form a duo that nobody would want to face right now.

Seattle was not hurt by opt-outs before the season began and has a healthy roster entering the Finals. The one player that will be missing is Sami Whitcomb, who left the bubble to travel to Australia where her wife is expecting their first child. Whitcomb is a deadly 3-point threat and brings more to the table than just that. Her absence is a bigger loss than some might think.