Aces look to bounce back against the Dream 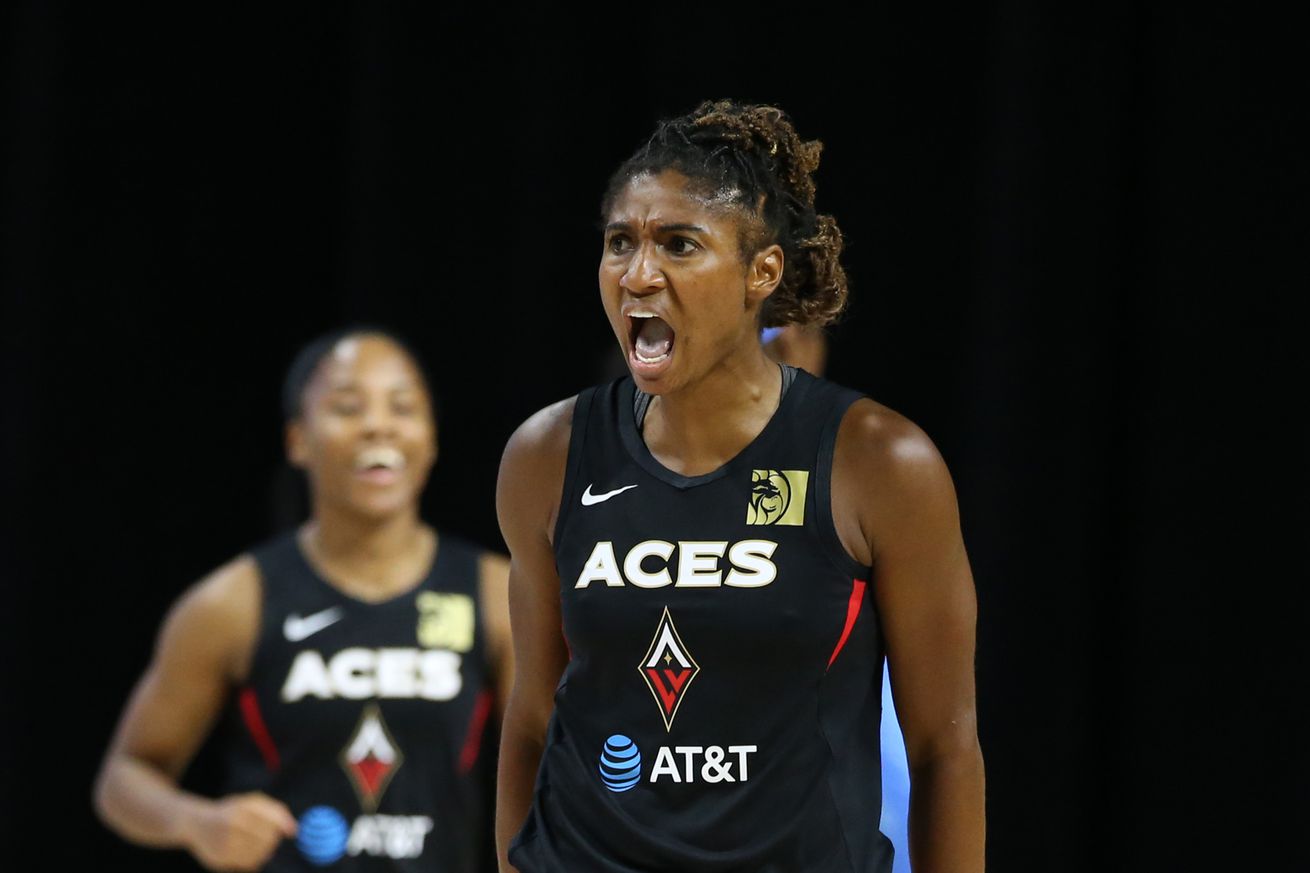 Angel McCoughtry faces off against her old team and will look to keep up the scoring. | Photo by Stephen Gosling/NBAE via Getty Images

Wednesday night, CBS Sports Network features a WNBA doubleheader. The New York Liberty and Dallas Wings will be up first, looking for a shootout, and will be followed by the Las Vegas Aces and Atlanta Dream.

Wednesday night’s WNBA games feature five teams who lost their season openers, with the Atlanta Dream as the only team with a win among those competing.

The most intriguing matchup of the night, by far, is the Atlanta Dream taking on the Las Vegas Aces, who now feature former Dream star Angel McCoughtry alongside A’ja Wilson. The rebuilding Dream put on quite the show in their opening game against the Dallas Wings, scoring 105 points. The Dream, led by Monique Billings’ 30 points, were impressive on offense, shooting 54.8 percent. The Aces lost in the dying seconds after controlling much of the game against the Chicago Sky, with McCoughtry and Wilson combining for 47 points.

The Dream surrendered 95 points to the Wings, but Dallas helped its own cause by making 13 3-pointers. Shooting beyond the arc is not in the DNA of the Aces, who attempted just five 3-pointers against Chicago. The Dream are likely outmatched in the paint and will need their 3-point shooting to offset the Aces’ dominance down low.

The Phoenix Mercury, who struggled offensively in their first game, take on the Indiana Fever, who were simply blown out by the Washington Mystics. The Mercury shot 44.3 percent in their blowout loss against the Los Angeles Sparks, but were hampered by poor shooting performances from Brittney Griner, Diana Taurasi and Bria Hartley, who shot a combined 10-of-33. The rest of the Mercury shot 17-of-28.

The Fever simply had no answer for Myisha Hines-Allen, who scored 27 points. One bright spot for the Fever was Kelsey Mitchell, who is starting to look the part of the primary scoring option for her team. Mitchell scored 25 points on 8-of-17 shooting. Both teams like to shoot from deep — over 25 attempts for both teams in their season openers.

Two of the youngest teams in the WNBA face off as the New York Liberty face the Dallas Wings. The Liberty lost big to the Seattle Storm in their opener in game that saw them simply outmatched from the start. The Storm defended rookie Sabrina Ionescu well by switching on screens and pressing often. The Liberty had the right idea offensively, taking 28 shots from deep, but only connected on six of them.

The Wings performed well offensively, but their inability to get stops against the Dream was their downfall. Defense will always be lacking among younger teams, so we could be in for an entertaining shootout in this one.

How to watch: NBATV, fever.wnba.com

How to listen: ESPN Phoenix 620 AM

Key to the matchup: 3-point shooting. Both teams like to shoot the three-ball and the team that shoots well from this area of the floor is likely to have the advantage. For the Mercury, Diana Taurasi shot 1-of-7 on 3-pointers and will need to do better, whereas fans will hope Skylar Diggins-Smith can repeat her 3-of-5 performance. Likewise for the Fever, Tiffany Mitchell shot 1-of-7 from beyond the arc in her first game of the season.

Feature: Skylar Diggins-Smith on what she has learned from Diana Taurasi

Key to the matchup: Arike Ogunbowale vs. Sabrina Ionescu. The Wings and the Liberty are going to go as far as these guards can take them. Ionescu was 0-of-8 from downtown but collected six rebounds and contributed a team-high four assists in her debut. Ogunbowale scored 19 points but on 7-of-21 shooting. Both players will hope to show improvement and as they improve, their teams’ success will follow.

Pro debut reaction from @sabrina_i20 – there’s beauty in the struggle. She and the #nyliberty return to action Wednesday at 8PM/ET vs @dallaswings on #CBSSportsNetwork. pic.twitter.com/BjD0ZgtaAs

Key to the matchup: Angel McCoughtry and A’ja Wilson vs. the Dream front court. In her first game back since her 2018 knee injury, McCoughtry picked up where she left off, scoring at will. Wilson looks unstoppable on the block. McCoughtry also has the extra motivation of playing against her former team. McCoughtry started at the small forward spot in the opener, which would give her a significant advantage over Shekinna Stricklen if that continues in this game. Elizabeth Williams and Monique Billings will have their hands full against Wilson on the defensive end.