Finding a destination for Skylar Diggins-Smith 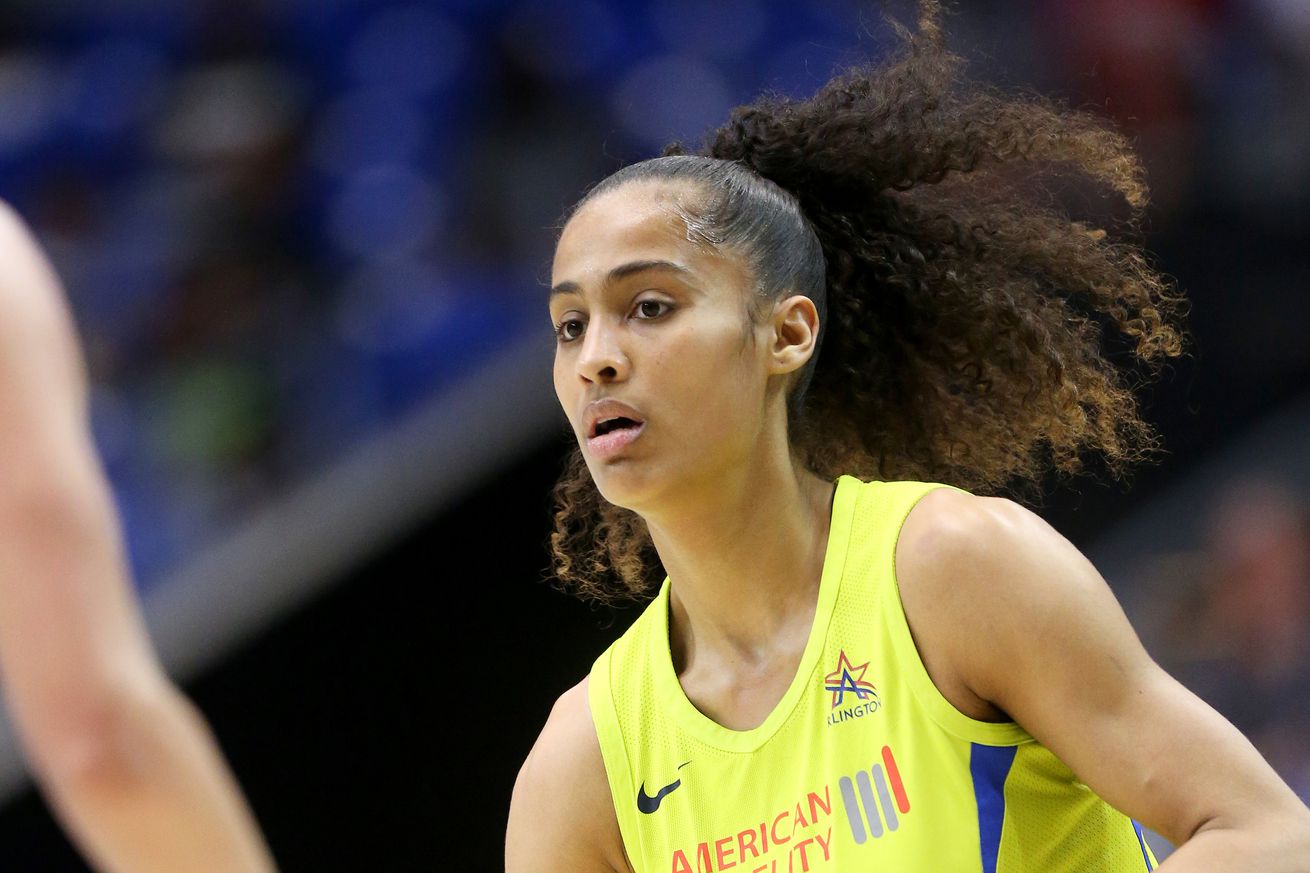 Skylar Diggins-Smith appears intent upon no longer wearing the electric green of the Dallas Wings. What uniform might she sport in 2020? | Photos by Layne Murdoch/NBAE via Getty Images

Skylar Diggins-Smith wants out of Dallas. The Wings have agreed to honor her demands. Where might Diggins-Smith suit up in 2020? Here are three intriguing destinations.

Skylar Diggins-Smith and the Dallas Wings are going through a basketball divorce.

I don’t plan on playing in Dallas next year. I’m happy to be playing in this league, and I want to play.

The Wings have agreed to Diggins-Smith’s demands. Yet, the organization, led by president and CEO Greg Bibb, gave Diggins-Smith the core designation. The Wings, thus, maintain control over Diggins-Smith’s rights, meaning they could receive a substantial return in a trade for the three-time All-WNBA honoree and four-time All-Star.

Diggins-Smith did not play last season. She sat out after giving birth and later revealed her struggle with postpartum depression. In October, Diggins-Smith shared her frustration with the Wings organization in a series of tweets.

Having no support from your own organization is unfortunate

People called me a quitter, said I gave up on my team, etc., etc.

Not knowing I took two FULL months away from everything because of postpartum depression. With limited resources to help me be successful mentally/physically.

In public comments last fall, Diggins-Smith elaborated on her dissatisfaction with the organization, telling reporters after Team USA’s exhibition victory over Texas A&M:

The organization has changes that it needs to make. Everyone knows that. That’s no secret to the public. It’s out of my hands now. I would love to finish my career in Dallas. If those conditions aren’t improved for myself, for the women on the team, for the WNBA, our children … I’m not coming back to that and that’s exactly what I told Greg Bibb and the organization. I’ve been transparent with that the whole time.

In that November contest against A&M, Diggins-Smith scored a team-high 19 points, converting five of her eight 3-point attempts. In Team USA’s recent exhibitions against UConn and Louisville, Diggins-Smith has not been spectacular, but she has been solid enough. At 29 years and in her prime, multiple WNBA teams are likely to consider her a valuable addition.

Last year, Connecticut Sun fans were frustrated with the rather light return the team received for sending Chiney Ogwumike to the Los Angeles Sparks. The Sun only acquired the Sparks’ 2020 first-round draft pick in exchange for Ogwumike. The Wings, however, made out a bit better when trading Liz Cambage to the Las Vegas Aces even though the combination of Moriah Jefferson, Isabelle Harrison and both of Vegas’ 2020 draft picks still do not equal the impact of Cambage.

A review of Cambage’s and Ogwumike’s trades — plus those of Tina Charles, Sylvia Fowles and Elena Delle Donne who threatened to sit out if their trade preferences were not honored — demonstrates the leverage the top-tier players have. Thus far, Diggins-Smith has not made a specific demand — only that she does not want to be in Dallas. This advantages the Wing because it allows Bibb to drive a bidding war for Diggins-Smith’s services. A 2020 lottery pick, a proven young player or future draft capital would seem to be the opening asking price.

Three franchises — the Atlanta Dream, Indiana Fever and Minnesota Lynx — should consider sacrificing picks and/or players to bring Sky-Digg to their town.

The Atlanta Dream’s 2019 season was a disaster.

The decision not to core Angel McCoughtry suggests the organization is ready for a reset. Diggins-Smith could be an intriguing, important piece for a retooled Dream team.

Most especially, Diggins-Smith would enhance an often-anemic Atlanta offense. As an All-WNBA and All-Star talent, she would take pressure off Tiffany Hayes, who struggled as a primary offensive engine in 2019. Both are aggressive offensive players who have the ability to play on or off the ball, giving the Dream a pairing that could inject the offense with dynamism. Diggins-Smith also could form a potent pick-and-roll combination with Elizabeth Williams, as Diggins-Smith is a more eager scorer than Renee Montgomery. This action could, in turn, make Tiffany Hayes’ isolation drives more effective because she no longer would attract all of the defense’s attention. While Diggins-Smith’s percentages have fluctuated throughout her WNBA career, she is a willing 3-point shooter with a relatively quick release, something the Dream desperately need.

Would the No. 4 pick in the draft be enough for Dallas to send Sky-Digg to College Park? Or, with the Indiana Fever (see below) possessing the No. 3 pick, will the Dream have to up their offer? Or, would the Dream also be willing to cede future picks? And might the Wings demand Monique Billings instead of another draft pick?

The No. 3 pick for Diggins-Smith?

It seems to make perfect sense. Bringing the South Bend native and former Notre Dame star back to Indiana would be emotionally satisfying and strategically smart. Yet, the prospect of trading for Diggins-Smith does present some complicated considerations for general manager Tamika Catchings.

Erica Wheeler was one of the best stories in the WNBA last season, going from undrafted to All-Star Game MVP. However, the All-Star Game was the apex of Wheeler’s season — she did not perform at an All-Star level during the second half of the season. After scoring 12.3 points per game on 46.4 percent shooting before the All-Star break, she scored only 6.5 points per game on 33.7 percent shooting afterwards. Her assists also dropped from 5.8 to 3.8 per game.

Wheeler’s late-season decline indicates she is over-extended as a starting point guard and perhaps better suited as an off-the-bench energy booster. Nonetheless, Wheeler’s inspiring emergence could make it difficult for Catchings to demote (or trade) Wheeler. In a conference call after the firing of former Fever head coach Pokey Chatman, Catchings asserted, “I think, right now, the most important thing for us is moving with the excitement we have, the players that we have. So what I’m looking at is: How do we continue to build with the players that we have?”

Acquiring Skylar Diggins-Smith would allow Catchings to “build with the players we have” by making these players better. In particular, Diggins-Smith’s experience with Liz Cambage suggests she could steward the offensive development of Teaira McCowan, which should be the top priority for Catchings and new head coach Marianne Stanley. Diggins-Smith also could help Kelsey Mitchell reach her potential, with Diggns-Smith’s leadership and ability to organize the offense in a way that allows Mitchell to operate as a pure scorer.

In exchange, the Wings should be thrilled to acquire the No. 3 pick in the 2020 Draft. Paired with their own No. 2 pick, Bibb and head coach Brian Agler will be able to add two top collegiate talents to an already exciting young team. If Dallas takes Baylor senior, and local gal, Lauren Cox with the second pick, might they also grab another Texas native, — Texas A&M junior (and potential early entry candidate) Chennedy Carter — with the third pick?

Unlike Atlanta and Indiana, the Minnesota Lynx cannot offer a lottery pick for Diggins-Smith. But if the price for Diggins-Smith is not as high as expected or if Dallas is more interested in adding several, longer term draft picks, Minnesota could come out ahead in the Diggins-Smith derby. All the more, Lynx head coach and general manager Cheryl Reeve impressed so strongly last season with her roster gymnastics that she was honored with the 2019 WNBA Basketball Executive of the Year award.

So, if Reeve wants to bring Diggins-Smith to Minneapolis, trust that she will find a way to get it done. It also is worth noting that Reeve has had the opportunity to see Sky-Digg up close lately while serving as the acting head coach for Team USA during its fall and winter training sessions and exhibition games.

Even if the recent rumors about Odyssey Sims’ uncertain status for the 2020 season appear to be unfounded, Diggins-Smith would still make sense for the Lynx. She would allow them to enter the contender conversation in earnest.

While Sims turned in an All-Star and All-WNBA effort during her first season in Minnesota, she is not a natural point guard. Of some concern is that Sims and the other Lynx ballhandlers struggled to get the ball to Sylvia Fowles last season. Diggins-Smith, however, has experience working with a forceful post presence. Adding the Notre Dame product thus could help maximize Fowles’ inside scoring abilities. With Diggins-Smith taking on primary point guard duties, Sims could serve as a score-first, secondary ballhandler. Add in the versatility of Naphessa Collier and the sweet midrange stroke of Seimone Augustus — not to mention a healthy Jessica Shepard and a spunky Lexie Brown — suddenly, the Lynx are a sneaky deep team with the potential to claim a top seed.

It seems that Sky-Digg would raise the ceiling most significantly for the Lynx but other interested teams (and their fans) may disagree. So, where would you like to see Diggins-Smith in 2020?