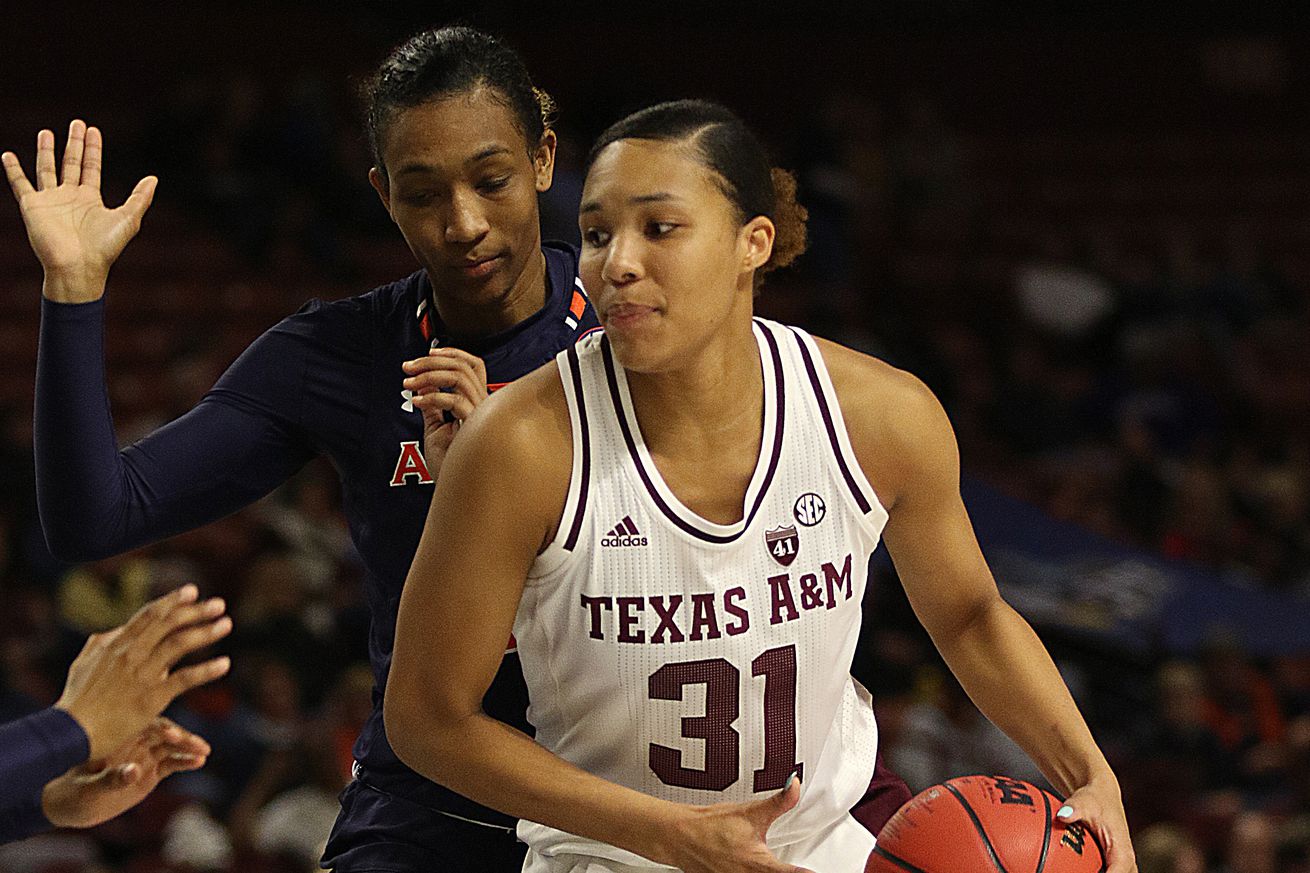 N’dea Jones (#31) is averaging 11.3 points and 11.0 rebounds for the Texas A&M Aggies. | Photo by John Byrum/Icon Sportswire via Getty Images

With star guard Chennedy Carter injured, N’dea Jones has been a consistent force in the frontcourt for the No. 16 Texas A&M Aggies. She also helped head coach Gary Blair reach a major milestone. Plus, Lisa Bluder of the Iowa Hawkeyes headlines a group of three other coaches with big accomplishments during the last week.

“Around the NCAAW Weekly” highlights the notable events of the week (in this case, the past two weeks). Check out the milestones, surprises, best games and outstanding performances:

Jones has posted a double-double in each of A&M’s first nine conference games and she is the only SEC player with an active streak that long. The junior scored 21 points to help the Aggies defeat the Alabama Crimson Tide 79-74 on Jan. 23, marking just the second time in her career she recorded 20 or more points. Jones then scored 21 points a week later in A&M’s 64-63 win over the Georgia Bulldogs on Jan. 30. She continues to step up while the Aggies’ best player, Chennedy Carter, recovers from an ankle injury.

Congratulations to our leader!

Lisa Bluder, head coach of the No. 20 Iowa Hawkeyes

Arizona State was a part of a triple overtime game for the first time in its history on Jan. 31 and emerged with a 76-75 win over the USC Trojans. The victory gave Thorne her 500th career win, with 460 of them being with the Sun Devils. Reili Richardson made the game-winning 3-pointer at the buzzer to cap the victory.

Dawn Plitzuweit, head coach of the No. 22 South Dakota Coyotes

With a 71-39 win over the Omaha Mavericks on Jan. 29, Plitzuweit notched her 100th win as head coach of South Dakota. She is 100-24 since taking the helm for the Coyotes and reached the milestone quicker than any coach in Summit League history. Legendary coaches Pat Summitt (Tennessee Lady Volunteers), Kim Mulkey (Baylor Lady Bears), Tara VanDerveer (Stanford Cardinal), Muffet McGraw (Notre Dame Fighting Irish) and Geno Auriemma (UConn Huskies) all took longer to record 100 wins at their respective schools.

Tyasha Harris of the No. 1 South Carolina Gamecocks

Harris dished six assists in an 88-53 win over the Georgia Bulldogs on Jan. 26, giving her 617 for her career. Harris passed the 615 recorded by prior assists leader Cristina Ciocan, who played for the Gamecocks from 2000-04.

Sabrina Ionescu of the No. 3 Oregon Ducks

On Jan. 24, Ionescu passed NBA great Gary Payton to capture the all-time lead in Pac-12 assists for men and women. The milestone came in a 76-64 win over the No. 9 Oregon State Beavers. Four games later, Ionescu now has 982 career assists. Payton finished his college days with 938.

The No. 6 Stanford Cardinal

Credit Stanford’s defense for holding Amber Melgoza of the Washington Huskies scoreless in a 58-41 win on Jan. 31. Melgoza, a senior, averages 15.6 points per game (18.2 in Pac 12 play). She dropped 40 on the Cardinal as a sophomore and rebounded to score 35 against the California Golden Bears on Feb. 2.

The Coyotes secured a dominant victory over the Omaha on Jan. 29 without making a 3-pointer. They outscored Omaha in the paint 50-16 and went 0-of-16 from distance. The last time South Dakota failed to make a 3-pointer over the course of an entire game was in 2014.

Games of the week

Down nine with eight minutes to go, the Gamecocks used a Mikiah Herbert Harrigan jumper to spark an 11-2 run that featured seven points from Aliyah Boston. Then, with 2:01 to go, Tyasha Harris came up clutch with a midrange make that proved to be the game-winner. But it was a football cornerback-style steal by freshman Zia Cooke that truly sealed the deal with six seconds remaining. Harris finished with a game-high 23 points and seven assists, while Boston scored 21 points and grabbed 12 rebounds to overcome Rickea Jackson and Jordan Danberry, who each scored 16 points in defeat.

Lady Vol senior Rennia Davis made a 3-pointer at the buzzer to give Tennessee the two-point win. The Lady Vols led by seven at halftime and were able to win despite being outscored in both the third and fourth quarters. Freshman Jordan Horston put up 19 points, eight rebounds, four assists and four blocks for the winners; Davis added 16 points and nine boards.

The Bulls were looking to remain above .500 in conference play against the MAC’s top team in Central Michigan. But Molly Davis’ triple with 2:38 left in the second overtime gave the Chippewas a lead they would not relinquish. Central Michigan made 6-of-6 free throws in the final 2:38 minutes en route to victory. Davis led the Chippewas with 28 points and Kyra Bussell added 15 points and 17 rebounds. Central Michigan’s leading scorer, Micaela Kelly, notched a triple-double (14 points, 10 rebounds and 10 assists).

Camryn Brown: 44 points, five rebounds and seven assists for the High Point Panthers in a win over the Winthrop Eagles on Feb. 1.

Iimar’i Thomas: 35 points and 10 rebounds for the Cincinnati Bearcats in a win over the Houston Cougars on Jan. 22.

Cece Hooks: 35 points, seven rebounds, four assists and three steals for the Ohio Bobcats in an overtime loss to the Central Michigan Chippewas on Feb. 1.

Abbey Ellis: 37 points, four rebounds, four assists and three steals for the Cal Poly Mustangs in a win over the UC Riverside Highlanders on Jan. 23.

Unique Thompson: 27 points and 15 rebounds for the Auburn Tigers in a loss to the No. 15 Kentucky Wildcats on Jan. 27.

Where: Humphrey Coliseum in Starkville, MS