Kayla McBride: ‘The world stopped’ … and ‘the dark stuff’ came out 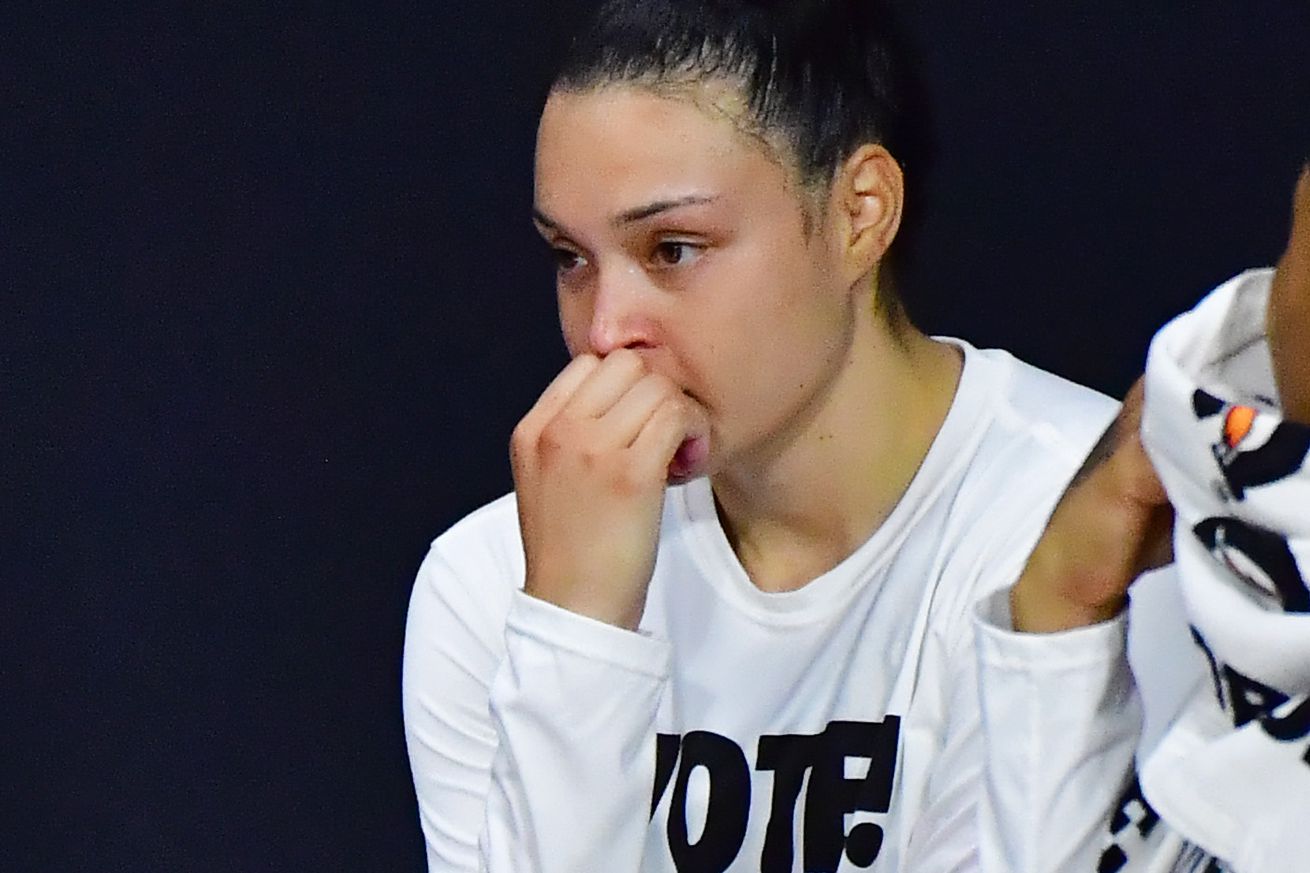 Kayla McBride and her Las Vegas Aces teammates look on as their team is swept in Game 3 of the WNBA Finals. | Photo by Julio Aguilar/Getty Images

Las Vegas Aces sharpshooter Kayla McBride shared candidly in The Players’ Tribune about the mental health challenges she faced when the coronavirus pandemic took basketball away. In honor of Mental Health Awareness Day, we are sharing an excerpt of her essay plus snippets from other WNBA players who’ve spoken out about their mental health.

Las Vegas Aces sharpshooter Kayla McBride, who finished No. 1 in the regular season and runner-up in the 2020 WNBA Finals, shared candidly in an essay in The Players’ Tribune about the mental health challenges she faced when the coronavirus pandemic took basketball away.

When “the world stopped,” she writes, “I had nothing to keep the dark stuff out. When I closed my eyes, my mind just became this, like, looping camera reel with pictures clicking by, of all the thoughts I tried to push away.”

It takes courage to expose one’s vulnerability publicly. But McBride and others before her have shared their struggles bravely and their stories amount to gifts for anyone who is suffering from similar challenges. In recognition of Mental Health Awareness Day, we bring you excerpts from their stories and links to mental health resources.

I’d get in the shower and turn the water up really hot and just stand in the steam. But I still couldn’t shut it off. I couldn’t calm down.

Imagine a dumbbell just sitting on your chest. After a while, it like sits into you.

It’s almost engraved in you.

That’s what my anxiety is like. That’s what I wake up with every single day.

I lost myself during quarantine.

Liz Cambage, starting center for the Aces, did not play in the 2020 WNBA season due to medical exemption. Since her 2018 return to the league following a hiatus of several years, Cambage has been outspoken about the toll playing in the U.S. had on her mental health. In her 2019 essay in The Players’ Tribune, however, she dug deeper into her past and discussed her depression, anxiety and alcohol abuse.

Are people really ready to talk about how, starting at around 15 years old, I would just get blackout drunk some nights? Or that I’ve woken up with an IV in my arm, after a weekend of partying, not being able to remember a thing? Or that my first attempt at sobriety was at 18?

Are people ready to talk about how, after I was drafted into the WNBA, I spent almost every night of my rookie season alone, in tears? Or all of the times I’ve locked myself inside my house, and ghosted on the world, just crying my eyes out for hours? (I call that my “Existential Crisis Mode” — when anxiety curls into depression and I become this heap on the ground, convinced I’m worthless and useless.)

“Me Too” by Breanna Stewart

Breanna Stewart, who won her second championship with the Seattle Storm in 2020 along with her second Finals MVP award, shared in a 2017 essay about being molested for years as a child and the lasting effects of that trauma and her ongoing recovery from it. Stewart also discusses the duty she feels to share her story.

This is where the details get difficult for me. There are some parts I can’t remember about that day. I’ve heard that’s common with trauma — your mind replaces memories with blank spaces. Like a Ctrl+Alt+Delete for anything that hurts too much.

I have so many black holes in my brain. Memories are sucked in and never come back out. There must be pieces of me just floating out there in the ether — pieces that were stolen from me. Pieces that are forgotten.

I’m still working through what comes next now that I have told my story. In sharing, I know that no matter how uncomfortable I typically am making things about myself, as a public survivor, I now assume a certain responsibility. So I’ll start by saying this: If you are being abused, tell somebody. If that person doesn’t believe you, tell somebody else. A parent, a family member, a teacher, a coach, a friend’s parent. Help is there.

Imani McGee-Stafford: “When my depression came back, it felt like such a failure”

Imani McGee-Stafford announced prior to the 2020 season that she would be stepping away from the hardwood for two years to pursue a law degree that she believes will empower her ability to help survivors of sexual abuse. Even before entering the WNBA, McGee-Stafford — currently signed with the Dallas Wings — began speaking about being molested by a relative, parental neglect and her three suicide attempts stemming from those abuses.

I think one of the hardest things for me was, once I finally got to a place of feeling, like, ‘I’m happy and I’m not suicidal and I am okay from day to day’ … When my depression came back, it felt like such a failure. I felt like all this time I had been getting better and it has just gone down the drain.

Every day may not be the best day. Sometimes, all I [can] do is get up and brush my teeth, and that’s okay — we’re going to try again tomorrow. And giving myself that little okay, that little permission to not be perfect every day, to not be on Cloud 9 every day, to be who I am in this moment [is important].

If you are thinking about suicide or are concerned that a friend or family member may be suicidal, reach out to the National Suicide Prevention Lifeline where counselors are available 24/7 by phone or chat: