McCoughtry’s homecoming gift: A win for Team USA vs. Louisville 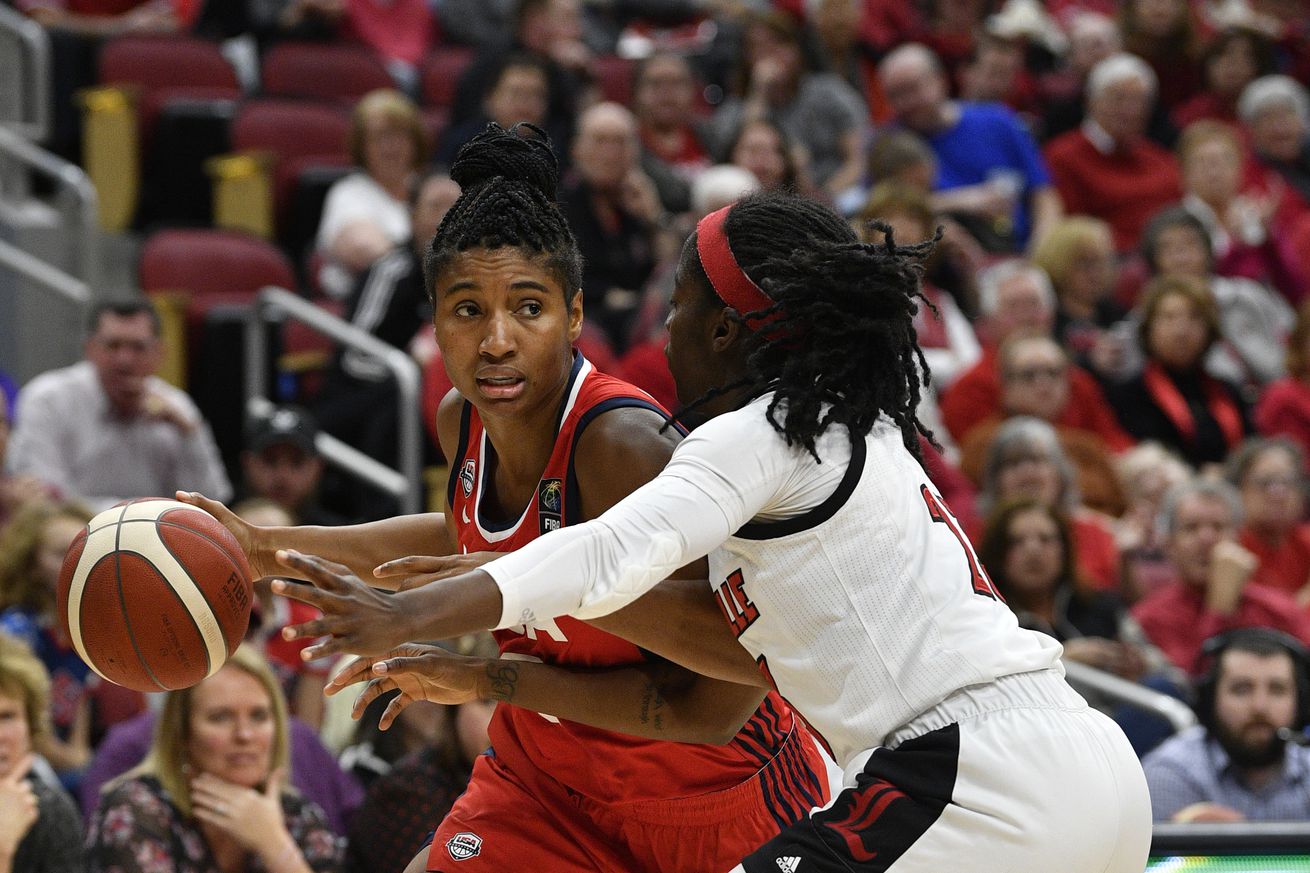 Team USA has been tested during its 2019-20 college tour, and that trend continued in the early-going of Sunday’s game against the Louisville Cardinals. Led by former Louisville standout Angel McCoughtry (with help from Sylvia Fowles and Breanna Stewart), the national team put up a lopsided victory by game’s end.

The USA Basketball Women’s National Team defeated the No. 5 Louisville Cardinals (21-1, 10-0 ACC) by a score of 97-54 on Sunday at the KFC Yum! Center in Louisville, Kentucky.

Former Cardinals star Angel McCoughtry (11 points) was one of three USA players to score in double figures. National team assistant coach Cheryl Reeve took McCoughtry out of the game with 15 seconds remaining to allow the Louisville crowd to honor her with a standing ovation.

Like she did against the No. 4 UConn Huskies, Sylvia Fowles led Team USA in scoring. She contributed 16 points and nine rebounds, both game highs. Breanna Stewart, meanwhile, scored 13 points on 5-of-7 shooting from the floor in the final three quarters; the Seattle Storm star was held to 0-of-4 shooting in the first.

Louisville won the opening frame 21-17. Junior guard Dana Evans recorded her first turnover within the first minute but finished the period with four points and an assist while setting the tone in favor of the Cardinals. Fourteen players (seven from Team USA and seven from Louisville) scored in the first 10 minutes of action.

The national team stormed back to win the second quarter 28-9 before winning the third and fourth periods 20-18 and 32-6, respectively. Team USA out-shot Louisville 53.2 percent to 36.7 percent, won the turnover battle by 15 and scored 23 fast-break points to Louisville’s five. Team USA also out-dueled the Cardinals in the paint, 64-24.

Highlights: A sample of Louisville and McCoughtry baskets

Team USA point guard Sue Bird was a solid 3-of-5 from distance and made more threes than anyone on either side. Fowles shot 8-of-9 from the field (88.9 percent).

Jazmine Jones led the Cardinals in scoring with 12 points and Evans walked away with 10 points, six assists and five rebounds.

Phoenix Mercury star Diana Taurasi did not play due to ongoing back issues, which also sidelined the star for Team USA’s game against UConn, her alma mater, on Jan. 27.

A’ja Wilson, who had wisdom teeth removed recently and also sat out the UConn game, tallied eight points and five rebounds in 14 minutes.

What an amazing few days it has been.

McCoughtry is Louisville’s all-time leading scorer. In her four years with the program, she averaged 20.0 points, 9.1 rebounds and 3.5 steals. Current Cardinals head coach Jeff Walz coached McCoughtry during her sophomore, junior and senior years (2007-09). The team went to the NCAA Tournament’s second round in 2007 and the Sweet Sixteen in 2008. In 2009, Walz took the team all the way to the national championship game and returned again in 2013. Although Louisville’s search for its first NCAA title continues, the program is a perennial power because Walz and McCoughtry put the it on the map.

Louisville will be back at the KFC Yum! Center to host the Florida State Seminoles on Thursday, Feb. 6, at 8 p.m. ET (ACC Network/Cards Radio 790 KRD).