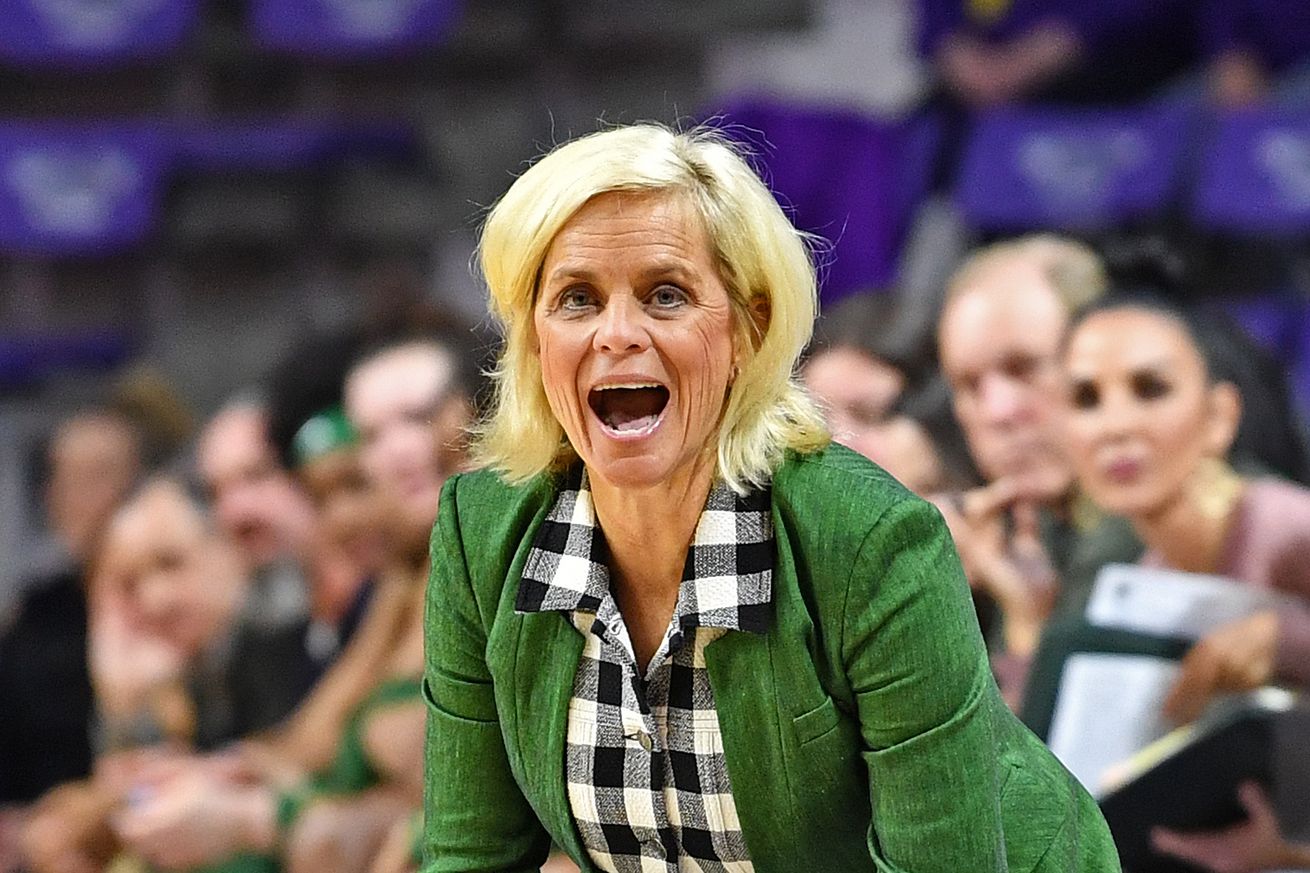 Kim Mulkey, head coach of the Baylor Lady Bears, eclipsed the great Geno Auriemma as the fastest coach to 600 wins. Plus, South Carolina Gamecocks head coach Dawn Staley reached a milestone of her own.

“Around the NCAAW Weekly” highlights the notable events of the week. Check out the milestones, surprises, best games and outstanding performances for games played through Sunday, Feb. 23:

Kim Mulkey, head coach of the No. 2 Baylor Lady Bears

On Feb. 18, a 77-62 victory over the Texas Tech Red Raiders gave Baylor Lady Bears head coach Kim Mulkey her 600th win at Baylor, the only school where she has been a head coach.

Dawn Staley and Aliyah Boston of the No. 1 South Carolina Gamecocks

Gamecocks head coach Dawn Staley, who is in her 12th year with the team, reached 300 wins at South Carolina with a victory over the No. 15 Kentucky Wildcats on Feb. 23.

Also of note for the Gamecocks last week were Aliyah Boston’s five blocks in a win over the LSU Tigers on Feb. 20. Boston reached 75 total blocks for the season, a record for Gamecock freshmen.

Mikayla Pivec of the No. 17 Oregon State Beavers

Pivec notched her 1,000th career rebound during a win over the California Golden Bears on Feb. 23. She is the third player in Beaver history to accomplish the feat and needs just 28 more boards to become the new program leader.

Take a look at where @pivec10 sits in her pursuit of Oregon State’s career rebounds record, as we head into the final weekend of the regular season!#GoBeavs pic.twitter.com/iPHxu9roSL

The Lady Bears were an incredible 28-of-31 from the free-throw line during a Feb. 23 victory over the Indiana State Sycamores. Jasmine Franklin led the way with a 7-of-7 effort.

On Feb. 23, the Buffaloes halted Arizona’s four-game winning streak by holding the Wildcats to 24.5 percent shooting from the field and winning the battle on the glass 48-27. Colorado won the game by a score of 50-38.

The Wildcats forced the Blue Demons into a 2-of-24 (8.3 percent) performance from 3-point range and 58 points overall. Both were season lows for DePaul.

The Lumberjacks went ahead by three with 1:08 to play in the second overtime and then forced the Vandals into three missed shots to walk away with the win. A layup by Idaho’s Lizzy Klinker forced the second overtime; a 3-pointer by Northern Arizona’s Jacey Bailey forced the first. Klinker finished with a game-high 27 points but Khiarica Rasheed notched a 21-point, 11-rebound double-double for the winners.

Alexandria Scruggs of the Demon Deacons made two free throws with 33 seconds left in overtime to give her team a six-point lead and put the game out of reach. Wake Forest survived regulation because of a Gina Conti triple with six seconds left in the fourth quarter. Ivana Raca led Wake Forest in scoring with 21 points and added eight rebounds. Madinah Muhammad dropped in 21 points for UNC.

Megan Abrams grabbed an offensive rebound with three seconds left and her put-back was good enough to ice the huge upset. Jasmine Walker scored 20 points for the Crimson Tide and Cierra Johnson barely missed out on a triple-double, with 10 points, eight rebounds and eight assists. Jessika Carter had 18 points and 12 rebounds for the Bulldogs.

Cece Hooks: 41 points, five rebounds and four steals for the Ohio Bobcats in a loss to the Akron Zips on Feb. 22.

Arella Guirantes: 36 points, four rebounds and three steals for the Rutgers Scarlet Knights in a win over the Ohio State Buckeyes on Feb. 22.

Madison Siegrist: 29 points and 13 rebounds for the Villanova Wildcats in a win over the DePaul Blue Demons on Feb. 23.

Rickea Jackson: 34 points and seven rebounds in 45 minutes for the Mississippi State Bulldogs in an overtime win over the Auburn Tigers on Feb. 20.

Charisma Osborne: 32 points and 11 rebounds for the UCLA Bruins in a win over the Washington State Cougars on Feb. 21.

Reason to watch: With Mississippi State and Kentucky both losing recently, the Aggies, who have star Chennedy Carter and their momentum back, will try to upset the nation’s top-ranked team and skip over the Bulldogs for second-place in the SEC standings.