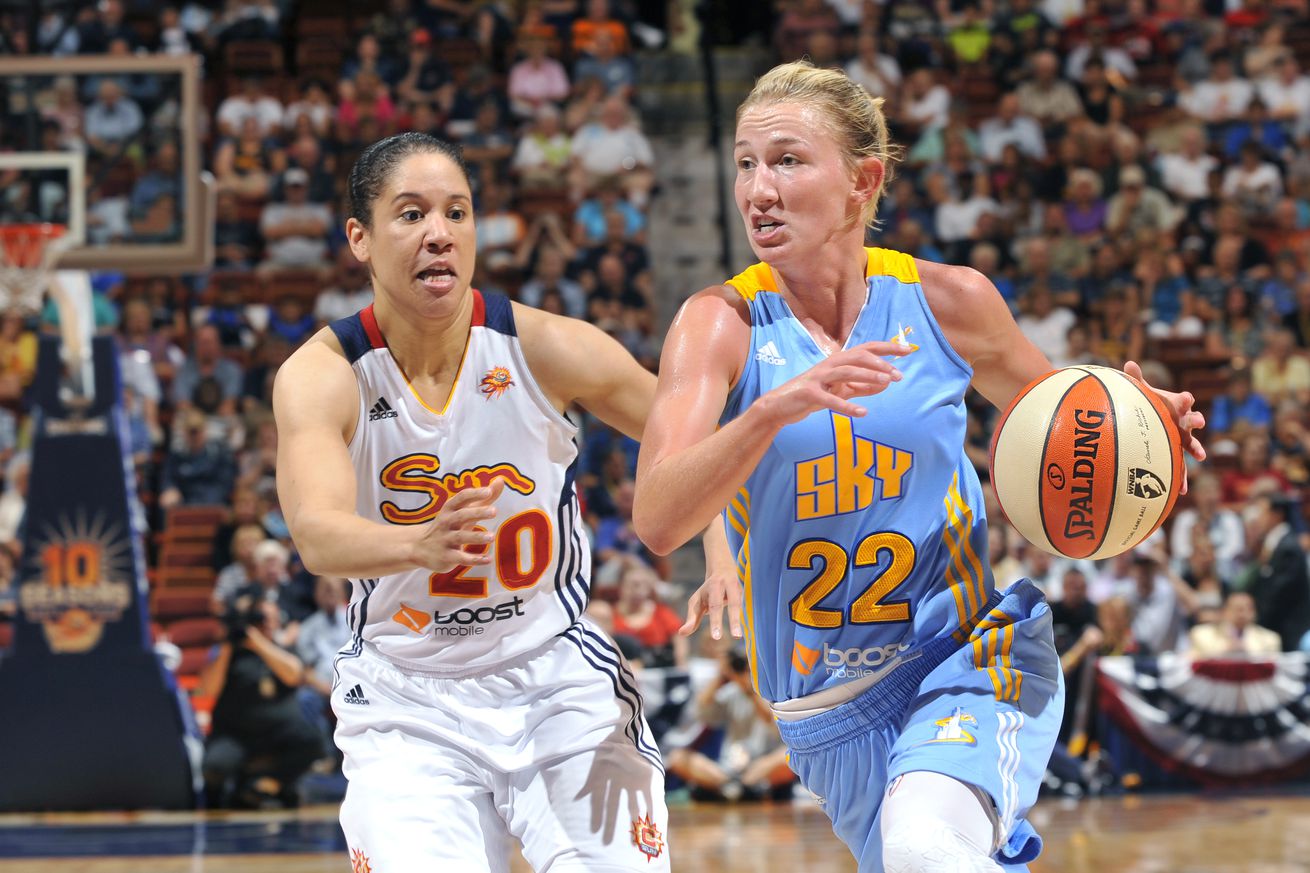 Kara Lawson (left) and Courtney Vandersloot in a battle of grizzled veteran versus young star circa 2012. | Photo by David Dow/NBAE via Getty Images

A short story about finding oneself through sport.

Why do I love the WNBA?

Anyone who knows me knows what the WNBA means to me — it has been a huge part of both my life and my identity for many years now. Yet, I’ve struggled to explain its meaning in written form. Maybe this is because women’s basketball is now a piece of me, something I can’t imagine life without and, therefore, something that’s pretty hard to put my finger on.

As the great Bill Watterson once wrote, you can’t turn creativity on like a faucet. And he’s right. Everyone’s personal story is different, but they don’t have to be told eloquently … just genuinely.

So I’m just going to start from the top.

2012 was a rough year for me. I was 18 years old and in community college, going through the motions without any real direction or passion.

Beginning in the spring, I had been in and out of the emergency room with chest pains and shortness of breath. These were eventually determined to be symptoms of anxiety, but only after all those X-rays, EKGs and other tests were performed to rule out physical ailments. Through it all, I had fallen into depression, convinced that there had to be something seriously wrong with me.

I’ll spare you most of the boring details, but by the time the 2012 WNBA season rolled around, I was bedridden. I had no appetite and was experiencing near-nightly panic attacks. It was an absolutely miserable experience, and having lost interest in most things that appealed to me, I desperately needed a pick-me-up.

I was an avid NBA watcher, but had only a mild interest in the WNBA. But I signed up for League Pass (at the time known as Live Access, and completely free) just to watch highlights of Lauren Jackson, who I believed was the greatest female basketball player on the planet. My local team, the Chicago Sky, was featured sparingly on a local access TV channel, and I watched a few of their games. Yet, I knew little about the players — even as Epiphanny Prince was setting scoring records and Sylvia Fowles was dominating the post as only she could.

One day, my mother suggested we go to a Sky game, if for no reason other than to get me out of the house and doing something fun. I agreed — reluctantly — on the condition that we attend a game versus the Seattle Storm so I could watch Jackson play in person.

I didn’t know Jackson was in Australia preparing for the 2012 London Olympics, and was a bit disappointed on that front, but I ended up having a great time regardless.

And it caught me off guard.

I had seen WNBA games on TV and respected the athletes, but watching them play in person made me realize just how fast and physical the women’s game is. What ultimately sold me on the Sky, though, was what happened afterward. The ticket rep who sold us our seats encouraged us to hang around, stating players would soon be coming back out for autographs.

As it turned out, the Sky hosted postgame autograph sessions featuring two players who would sign whatever fans brought to them. When Prince and Shay Murphy made their way around Allstate Arena to greet the small but raucous line of fans waiting for them, I was starstruck. Yet, there was no security, no escort, nothing that would suggest these were professional basketball players aside from the jerseys they were wearing.

Both Prince and Murphy were extremely polite and engaging, thanking each of the fans who stayed after and saying, “See you next time!”

This brought upon me another realization: WNBA players are human beings, too, just like the rest of us.

Okay, I know that sounds silly. But you must understand that before I started watching the WNBA, I thought of professional athletes as celebrities — people on a different tier than us common folk, who you could only hope to speak with if you had serious connections. I never thought I had a snowball’s chance in hell of meeting any of the Bulls (and still don’t) but here, at my very first WNBA game, I got to shake the hands of some of the best basketball players in the world.

For the first time in months, I was paying no attention to my breathing or my anxiety — only sheer elation.

The significance of this was not lost on me. Next thing I knew, my mother and I had signed up for tickets for the remainder of the season at a reduced price.

The perks, the ticket rep explained to us, included a pregame Q&A with head coach Pokey Chatman and an annual gathering with the team, exclusive to season ticket holders. These perks underscored that the Sky treated their fans much differently than how I was used to being treated by professional sports teams. Whereas I would be thought of as just a number at a Bulls or White Sox game, the Sky thought of me as family.

While the 2012 season ended poorly for the Sky, they ended up winning the No. 2 overall pick in the following season’s draft lottery — a franchise-changing moment that I knew I had to be around for. When our ticket rep called and asked if we’d like to join as a full-time members, I didn’t even have to think about my answer.

Eight years later, not only have I fallen completely in love with the WNBA and the game of basketball — because, in all honesty, I would have never appreciated the game as I do today had I stuck with just watching the NBA on TV — I’ve also made countless invaluable connections throughout the women’s basketball community. The vast majority of people who I’m lucky to call friends I met through the WNBA, either at games or on social media, and I truly believe such camaraderie played a crucial role in the eventual restoration of my mental health.

I can’t imagine where I’d be without this community.

Now, here’s the thing. Growing up, I never really “belonged” to anything. I never played team sports, never joined any clubs or organizations and never played in a band or orchestra. My circle of friends was small. I was an only child. I was always just sort of … there.

Eight years after my first WNBA game, I can say that as a Sky season-ticket holder, I feel like I belong. We all need our own “thing.” The WNBA is mine, and I can’t imagine it being any other way.

Thank you for reading.