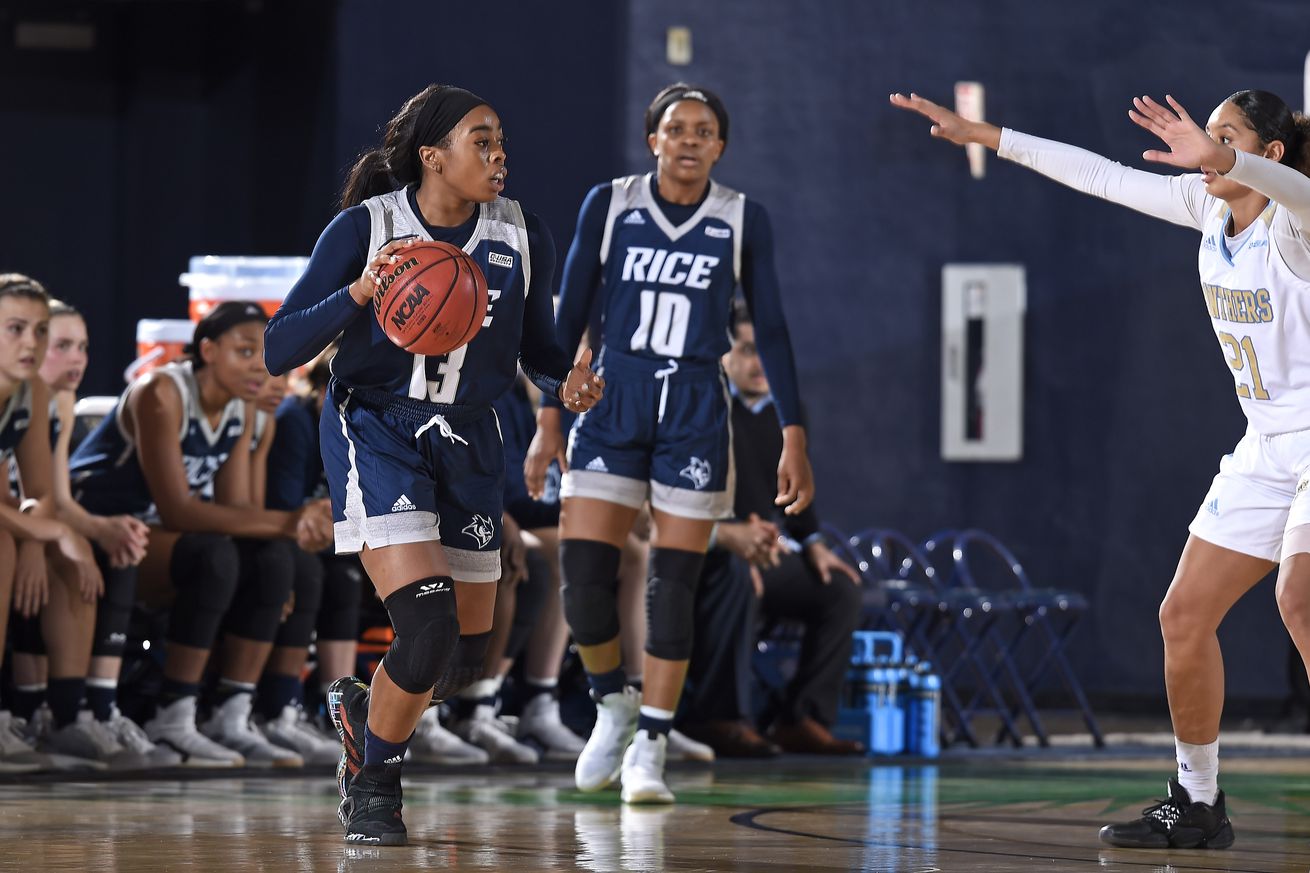 Rice’s Erica Ogwumike won her second C-USA Player of the Year award in 2019-20. Despite this and other successes, the opportunities denied must sting for the Owls’ senior leader. | Photo by Samuel Lewis/Icon Sportswire via Getty Images

The Rice Owls captured their second straight regular-season championship in 2019-20. Senior Erica Ogwumike also won her second consecutive C-USA Player of the Year award. However, Ogwumike and the Owls were denied the opportunity to defend their C-USA tournament title or show their stuff in the NCCA Tournament.

On the surface, the Rice Owls’ season was an undisputed success.

The final regular-season conference contest was a thriller.

On Senior Day, senior guard Erica Ogwumike shone. She not only scored a team-high 20 points but did it when it mattered most. In a back-and-forth game that featured 18 lead changes, Ogwumike made a clutch bucket with 27 seconds remaining before sinking a pair pressure-packed free throws. Rice captured the 73-70 victory, as well as sole claim to the conference championship.

As Ogwumike expressed after the game, “I don’t think I could have written this any better than to close out my home career with a conference championship.”

A few days later, Ogwumike was named C-USA Player of the Year for the second straight season. She also was named to the All-Conference First Team and All-Defensive Team.

Another Owl also earned multiple conference honors. Junior center Nancy Mulkey was named C-USA Defensive Player of the Year for the second-straight season. The 6-foot-9 Mulkey weaponized her height and length, anchoring the Rice defense as an intimidating rim protector, as evidenced by her conference-leading 77 blocks. Mulkey, of course, also earned a spot on the All-Defensive Team, as well as one on the All-Conference First Team.

Despite these team and individual accomplishments, the Rice Owls cannot help but feel a bit unfulfilled. Due to concerns about COVID-19, the C-USA Tournament was cancelled, denying Rice an opportunity to defend its tournament title.

A berth in the Big Dance also was denied.

Despite all of her collegiate accolades, Ogwumike could have used the NCAA Tournament to showcase her professional-level skills. According to Swish Appeal draft expert Eric Nemchock, the younger Ogwumike’s WNBA potential remains in question. With a Cinderella run, Ogwumike could have convinced WNBA executives that, like her sisters, she belongs in the league.