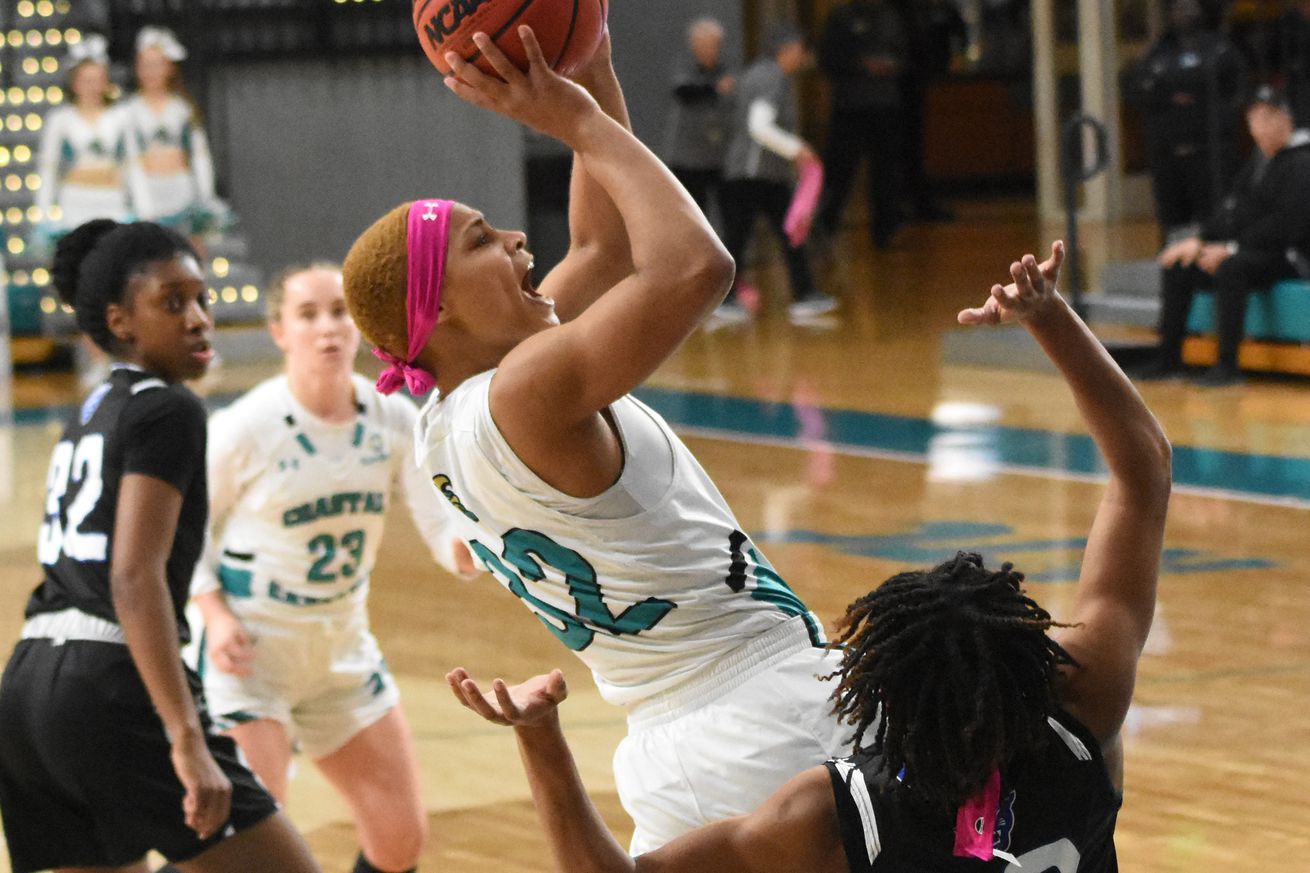 DJ Williams shoots over defenders: a theme in her unstoppable week for the Coastal Carolina Chanticleers. | Photo by Bob McCool

DJ Williams of the Coastal Carolina Chanticleers scored a combined 73 points in two games last week. Meanwhile, Sabrina Ionescu of the Oregon Ducks surpassed 1,000 assists and is now 20 rebounds away from 1,000.

“Around the NCAAW Weekly” highlights the notable events of the week. Check out the milestones, surprises, best games and outstanding performances for games played through Sunday, Feb. 16:

On Feb. 13, DJ Williams poured in 51 points in the Chanticleers’ win over the Troy Trojans. In the process, she set a program high for scoring in a single game. The senior guard added eight assists and seven rebounds in her team’s 124-103 win.

Two days later, Williams followed up her historic performance with a triple-double of 22 points, 14 rebounds and 10 assists. That’s a combined 73 points, 21 rebounds and 18 assists in two games.

DJ’s 51 was something special! pic.twitter.com/gsOyoq9LBF

Williams’ unstoppable week has Coastal Carolina now sitting on a 21-3 record and tied for first in the Sun Belt Conference.

Sabrina Ionescu of the No. 3 Oregon Ducks

Ionescu dished eight assists in an 80-66 Oregon win over the No. 8 UCLA Bruins on Feb. 14 to give her over 1,000 assists for her career. Ionescu also has accumulated over 2,000 points during her time in Eugene. WNBA star Courtney Vandersloot of the Chicago Sky is the only other player in men’s or women’s college basketball to record at least 2,000 points and 1,000 assists in a career. Vandersloot did so during her time with the Gonzaga Bulldogs from 2008 to 2011. The 1,000-assist club is pretty exclusive too — only five women’s players have made it.

Reili Richardson of the No. 21 Arizona State Sun Devils

Richardson is now the Arizona State program leader in assists with 539. The WNBA’s Briann January, who plays for the Phoenix Mercury, previously held the record with 538 assists tallied from 2006 to 2009. Richardson reached the milestone on Feb. 16 after notching six helpers in a 72-68 win over the Washington Huskies.

Rhyne Howard of the No. 14 Kentucky Wildcats

Howard, a sophomore, surpassed 1,000 career points in a 73-62 win over the No. 9 Mississippi State Bulldogs on Feb. 16. She and the Wildcats may have a long postseason ahead for her to add to her season total.

Lindsey Pulliam of the No. 18 Northwestern Wildcats

Pulliam, a junior, scored 31 points in a win over the Michigan State Spartans on Feb. 10 and reached 1,500 career points. She reached that milestone quicker than any Wildcat before her.

The Razorbacks have scored 103 and 108 points in their last two games. Both marked program highs for offensive output in SEC play, with the 108 accomplished against Ole Miss on Feb. 16 currently standing as the conference record.

Arkansas shot 64.4 percent (38-of-59) from the field in the Ole Miss game, setting a new program record in that category as well.

The Wildcats notched their 10th conference win, 72-57, over the Washington State Cougars on Feb. 16. Arizona hadn’t won a conference game by double-digit scoring since 2011.

Kaila Charles of the No. 7 Maryland Terrapins

Charles, a senior, notched 900 career rebounds after hauling in five boards against the Penn State Nittany Lions on Feb. 16. With 1,918 career points, she has a shot at reaching 2,000 points and 1,000 rebounds, but the latter is a long shot.

Tyasha Harris of the No. 1 South Carolina Gamecocks

Harris dished out 11 assists with no turnovers in her team’s first-ever win over the No. 6 UConn Huskies on Feb. 10.

The Gamecocks held UConn to two points off 1-of-16 shooting from the field in the first quarter of their Feb. 10 bout. That point total is the smallest ever for the mighty Huskies in a single quarter.

The Aggies defeated the Tennessee Lady Volunteers 73-71 on Feb. 16 in large part because they made 28 free throws on 33 attempts.

Games of the week:

Lexi Wallen was fouled with a second to go in the second overtime and made both free throws to capture the win for the Redbirds. Wallen also made a layup to force the second OT and a 3-pointer at the buzzer of regulation to force the first. She finished with 35 points.

Kiana Williams hit a 3-pointer with four seconds left to give Stanford the victory. She finished with 29 points. Mya Hollingshed scored 19 points in defeat. The Buffaloes were down by eight at halftime before winning the third quarter 21-14 to give the Cardinal a run for their money in the fourth.

The Wildcats led for most of the overtime period and Peyton Williams’ free throws pushed their lead to four with seven seconds remaining. The Sooners forced the extra frame with a free throw from Aspen Williston, who could have won the game for her team if, with 46 seconds remaining in regulation, she had made both attempts . Williams had a monster game for Kansas State with 31 points, 19 rebounds, six assists and five steals.

Camryn Buhr: 36 points and 13 rebounds for the Lehigh Mountain Hawks in a win over the Army Black Knights on Feb. 15.

Chelsey Perry: 36 points, eight rebounds and five steals for the UT Martin Skyhawks in a loss to the Southeast Missouri Redhawks on Feb. 13.

Chennedy Carter: 37 points, five rebounds and three steals for the No. 16 Texas A&M Aggies in a win over the Tennessee Lady Volunteers on Feb. 16.

Dora Goles: 36 points and three steals for the Idaho State Bengals in a win over the Montana Lady Griz on Feb. 15.

Where: Memorial Coliseum in Lexington, KY

How to watch/listen: ESPN2/Gamecock All-Access or RADIO: 98.5 FM or Kentucky Wildcats TV