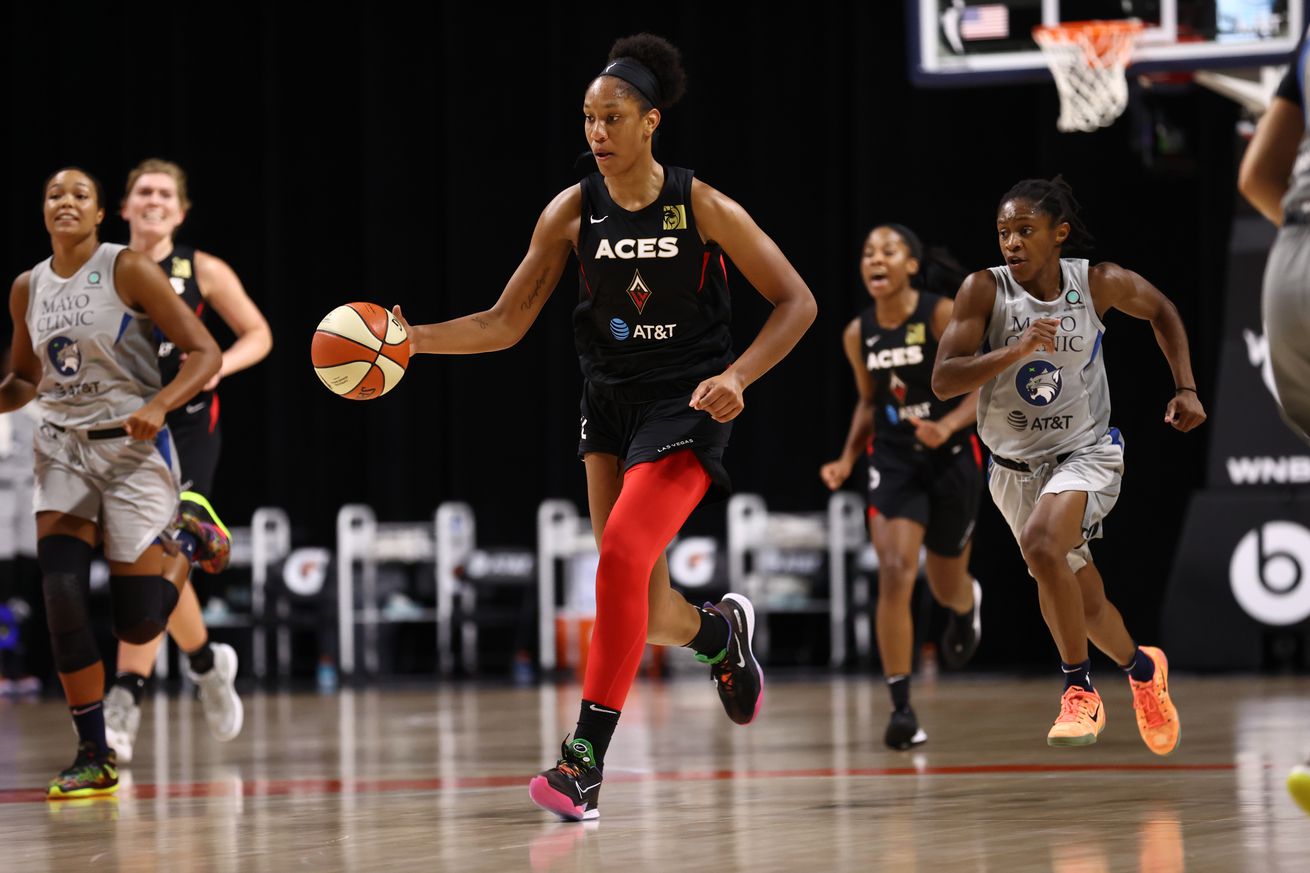 MVP candidate A’ja Wilson leads the Las Vegas Aces, who have been in the hunt for a top-2 playoff seed all season long. | Photo by Ned Dishman/NBAE via Getty Images

With just a few days remaining in the 2020 WNBA regular season, teams have little time to jockey for playoff position. The Las Vegas Aces would love to have a top-2 seed and double playoff bye, and a win over the Minnesota Lynx — who are currently fighting for a first-round playoff bye — would go a long way in that quest.

The Las Vegas Aces (15-4) will take on the Minnesota Lynx (13-7) on Thursday, Sept. 10 in a nationally-televised game — one that will likely have major postseason implications.

The Aces enter Thursday as the WNBA’s No. 2 overall seed and, at 15-4, remain just one and a half games behind the first-place Seattle Storm. This, of course, doesn’t hold as much bearing at it would in a non-bubble scenario, as postseason homecourt advantage does not exist in a neutral location, so there’s no real difference between the No. 1 and No. 2 seeds.

There is, however, a difference between the top two seeds and the next two seeds. The WNBA’s top two teams will still get a double bye to the postseason semifinals — a period of rest that’s been hard to come by during the 2020 season’s condensed schedule.

It’s imperative, then, that the Aces hold off the Los Angeles Sparks (15-5), who are just a half game behind them in the standings.

Similarly, the game could also be considered a “must-win” for the Lynx, who currently cling to the No. 4 overall seed at 13-7. If the regular season ended today, the Lynx would have a one-round postseason bye, but if they fall to fifth place or lower, they’ll be placed in a perilous first-round, single-elimination matchup, which is something head coach Cheryl Reeve would probably like to avoid.

Needless to say, there’s a lot riding on this game for both teams. There’s also plenty of end-of-season award material: A’ja Wilson is considered by most to be a frontrunner for WNBA Most Valuable Player, while Dearica Hamby is a favorite for Sixth Woman of the Year. For Minnesota, Crystal Dangerfield is having a Rookie of the Year-caliber season, and Napheesa Collier might still have an outside shot at Defensive Player of the Year. Finally, both Reeve and Bill Laimbeer have strong cases for the league’s Coach of the Year award. Keep all these narratives in mind as the Aces and Lynx duke it out on ESPN2.

Keys to the matchup: Both the Liberty and Fever have officially been eliminated from playoff contention, so there’s not much to watch for here other than each team taking a longer look at its less-experienced players. The Liberty, in particular, got good production out of Jocelyn Willoughby in their last game, so she’s a player to keep your eye on in this one. Indiana doesn’t have as many rookies as New York does, but maybe Kathleen Doyle and Kamiah Smalls can get some extended burn in an otherwise meaningless game.

Keys to the matchup: The last time these two teams met, Sylvia Fowles exited the game early with an injury, and the Lynx could do little to recover. The Lynx have been without Fowles since then, so they’ve had plenty of time to adjust to life without their dominant center. Still, slowing down Wilson will be a tall order. The MVP candidate has scored at least 20 points in each of her last three games, and Minnesota lacks the size and physicality on the interior to match her.

Keys to the matchup: The Sparks must remain within striking distance of the Aces before they meet this Saturday, so don’t expect them to let up in the meantime. The Mystics, meanwhile, are fighting for their playoff lives. They’re a half game behind the Dallas Wings for the No. 8 seed, so there’s quite a bit at stake for them too. It was the Sparks’ bench — Riquna Williams and Te’a Cooper in particular — that was the determining factor the last time these two teams played, but the Mystics’ roster looks much different now than it did then, so we’ll see if they can hold out longer against the Sparks’ depth this time around.