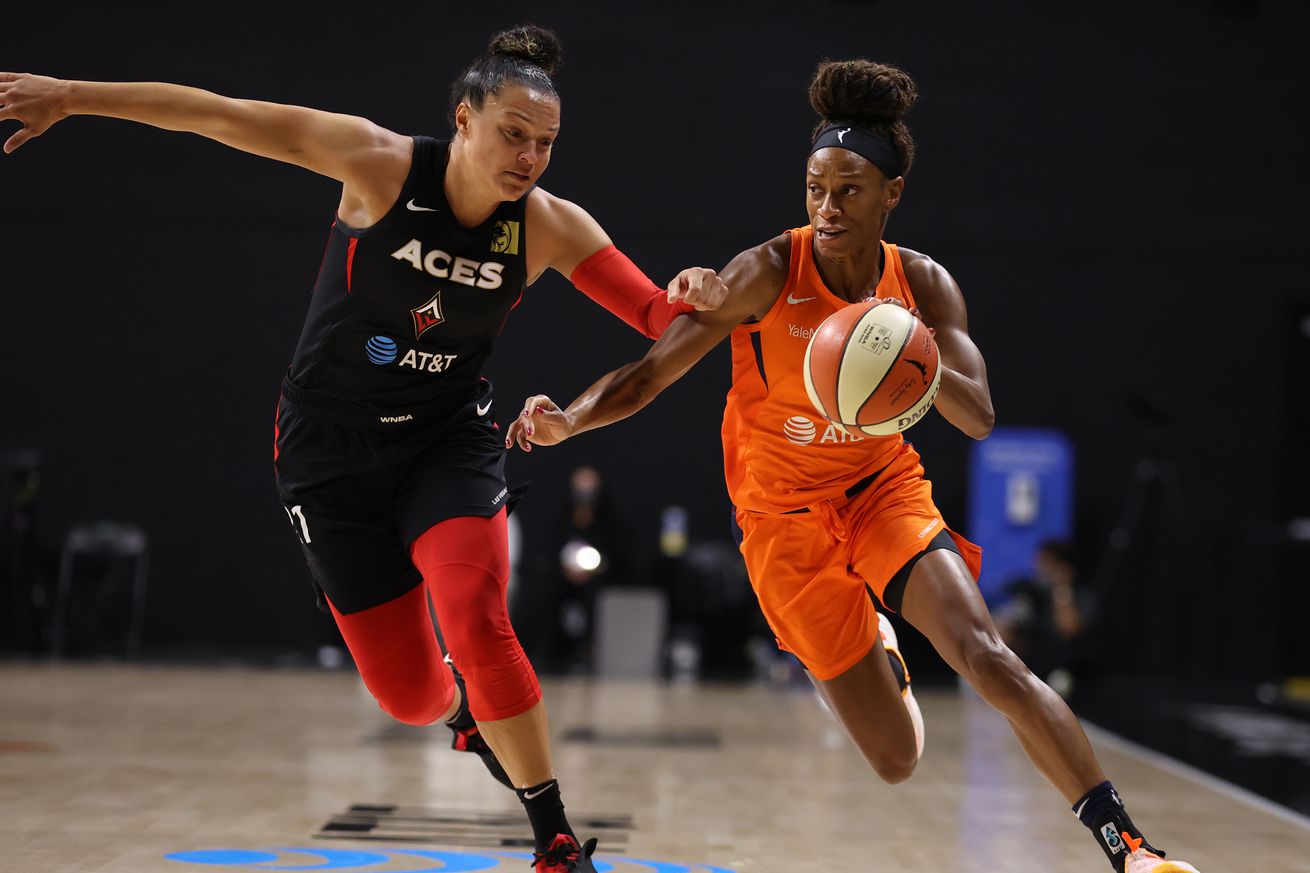 Connecticut Sun guard Jasmine Thomas (with ball) drives to the basket against Kayla McBride of the Las Vegas Aces. | Photo by Stephen Gosling/NBAE via Getty Images

Jasmine Thomas’ career-high 31 points paced the Connecticut Sun in their convincing Game 1 victory over the Las Vegas Aces to kick off the 2020 WNBA Semifinals. The other series between the Minnesota Lynx and Seattle Storm was postponed because of inconclusive COVID-19 tests.

The No. 7 Connecticut Sun — having won their first three games of the 2020 WNBA Playoffs by double digits — are moving like a freight train. Their most recent win over the No. 1 Las Vegas Aces in Game 1 of the semifinals on Sunday shocked the WNBA.

Meanwhile, Game 1 of the highly-anticipated series between the No. 2 Seattle Storm and No. 4 Minnesota Lynx has been postponed due to inconclusive COVID-19 tests returned to multiple Storm players.

Connecticut Sun guard Jasmine Thomas poured in a career-high 31 points on Sunday as her team defeated the No. 1 Las Vegas Aces to open its semifinal series. Connecticut has now won 2020 playoff games by 13 points, 14 points and 25 points.

The No. 7 Sun eliminated the No. 6 Chicago Sky and the No. 3 Los Angeles Sparks before winning Game 1 against top-seeded Las Vegas, improving their 2020 record to 13-12 overall. Connecticut started 0-5 in the regular season and finished 10-12. Sunday’s win gave the team its first winning record of 2020.

J. Thomas scored 14 points in the second quarter and was not afraid to drive or shoot from outside once she realized she had the hot hand.

The Aces, meanwhile, failed to get MVP forward/center A’ja Wilson enough touches at key moments and took some ill-advised 3-point attempts. The Aces pride themselves on inside scoring. Kept out of the paint by Alyssa Thomas and a stalwart Sun defense, the Aces, who average 11.5 attempts from beyond the arc each game, attempted 14 shots from 3-point range and made just one of them.

A. Thomas filled in the stat sheet with an impressive 18 points, six rebounds, five assists, five steals and two blocks.

Wilson scored 19 points and hauled in nine boards for the Aces and Jackie Young chipped in 17 points, including the team’s lone 3-pointer, off the bench. Nobody else on Las Vegas scored more than six points and 62 marks the lowest scoring output for the team in 2020; the previous low was 78.

On the other side, Natisha Hiedeman became a scoring focus late in the blowout and finished with 14 points. DeWanna Bonner, however, struggled from the field (2-of-12) and finished with just eight points. She helped in other areas by pulling down eight rebounds and dishing four assists.

The first quarter was a defensive battle before J. Thomas heated up in the second. Wilson did her best to keep the Aces in it, but the Sun ended up winning that second frame 22-15 and went on to win the third 28-16 before getting their stars some rest in the fourth.

The Sun and Aces are scheduled to play the second game of their series at 9 p.m. ET on Tuesday, Sept. 22.

The Storm players who received inconclusive tests were given more tests on Sunday and are self-isolating.