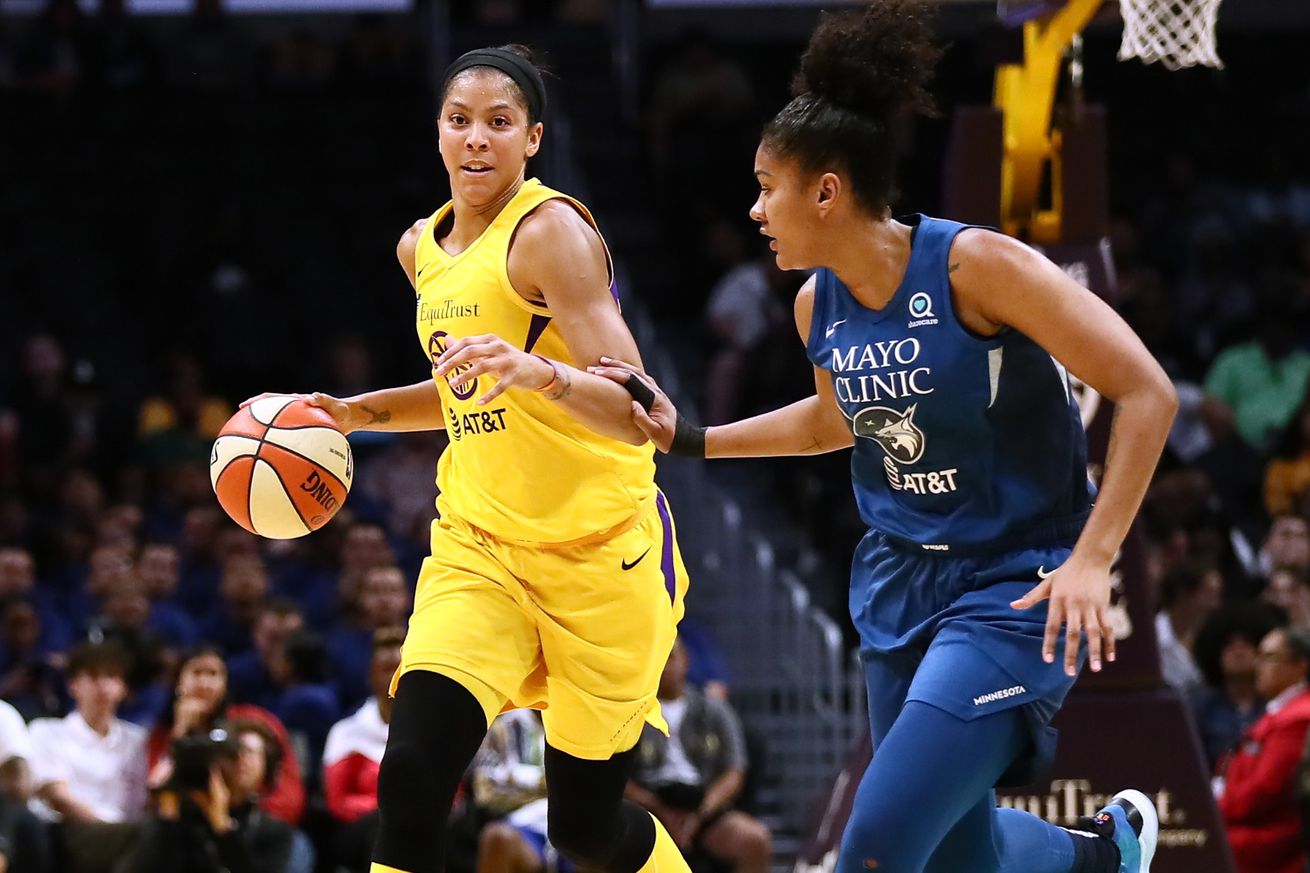 Candace Parker (left) and Damiris Dantas are set to battle in a Monday meeting between the playoffs-bound Sparks and the playoffs-hopeful Lynx. | Photo by Leon Bennett/Getty Images

The 12-3 Los Angeles Sparks are trying to increase their two-game lead over the 10-5 Minnesota Lynx with a chance to move into a tie in the standings with the first-place Seattle Storm. Also on Monday, the 10-6 Chicago Sky will take on the 5-10 Indiana Fever in hopes of moving into fourth place ahead of Minnesota.

The Minnesota Lynx and Los Angeles Sparks — set to clash on Monday night at 10 p.m. ET — are embroiled in one of the best rivalries in WNBA history. This season, both are in the mix for a first-round bye, which is the reward for teams that finish in the top four in the standings.

The Sparks, who won their first meeting with the Lynx by 16 points on Aug. 9, have been on a nine-game winning streak after starting the season at 3-3. The Lynx are 5-4 in their last nine contests after a 5-1 start. LA is currently tied with the Las Vegas Aces for second place and trail only the 13-3 Seattle Storm. Minnesota is fourth place in the standings, one-half game ahead of the Chicago Sky.

A Sparks win would put them in a tie for first place with the Storm — Seattle owns the head-to-head tiebreaker — and could also put the Lynx behind the Sky. In contrast, if Minnesota wins and Chicago loses, Minnesota will have a 1.5-game cushion in fourth place and be just one game behind LA for third.

The Lynx will be without superstar center Sylvia Fowles (6’6”) for the sixth-straight game, which will hurt them in the post, where the Sparks’ Candace Parker (6’4”) will hope to make a big impact against Napheesa Collier (6’1”) and Damiris Dantas (6’3”).

Parker leads the WNBA with 9.4 rebounds per contest and is an MVP candidate.

Rookie of the Year candidate Crystal Dangerfield hopes to make up for the Lynx’s disadvantage in the frontcourt by continuing her stellar play at point guard. She is averaging 15.5 points per contest through 15 games, which is just under one point higher than Fowles’ scoring average in her seven games this season.

The Lynx will need Collier to have a big game to keep up with the Sparks’ big three of Parker, Nneka Ogwumike and Chelsea Gray. Minnesota could also use some help from starters Dantas and Lexie Brown in an effort to match the scoring depth coming from LA’s Riquna Williams, Brittney Sykes and Sydney Wiese.

On Aug. 22, the Sky defeated the Fever 87-76. Indiana was coming off a huge upset win over Seattle, but began a three-game losing streak with the loss. Chicago has lost two games in a row and will try to get back on track without Azurá Stevens and Diamond DeShields, both of whom have left the bubble. Stevens has a knee injury and is now out for the season. DeShields left for personal reasons and is likely out for rest of the season as well.

Key to the matchup: Indiana’s aggressiveness on defense. The Sky are ahead of the Fever in both field goal percentage (49.1 to 44.3) and 3-point percentage (36.0 to 34.4). They also force 3.7 more turnovers per game (14.6 to 10.9). Shooting at a better clip is going to be hit or miss, but the Fever can control their aggressiveness on defense and need to force the Sky into some mistakes. Despite having a Courtney Vandersloot-led offense, Chicago is fourth-worst in the league for lost possessions, with 15.3 turnovers per game.

Highlights: Sweet passes from Vandersloot and more from Sky’s win over Fever

How to watch: CBS Sports Network and FOX Sports North PLUS

Key to the matchup: Candace Parker. It’s a big-time matchup late in the season and Parker has embraced the pressure of being her team’s leader once again after not being 100 percent in 2019. With Fowles out for Minnesota, can Parker adjust by doing more in the post than she does on the perimeter?