Preview: Can Mitchell and the Fever outgun the streaking Aces? 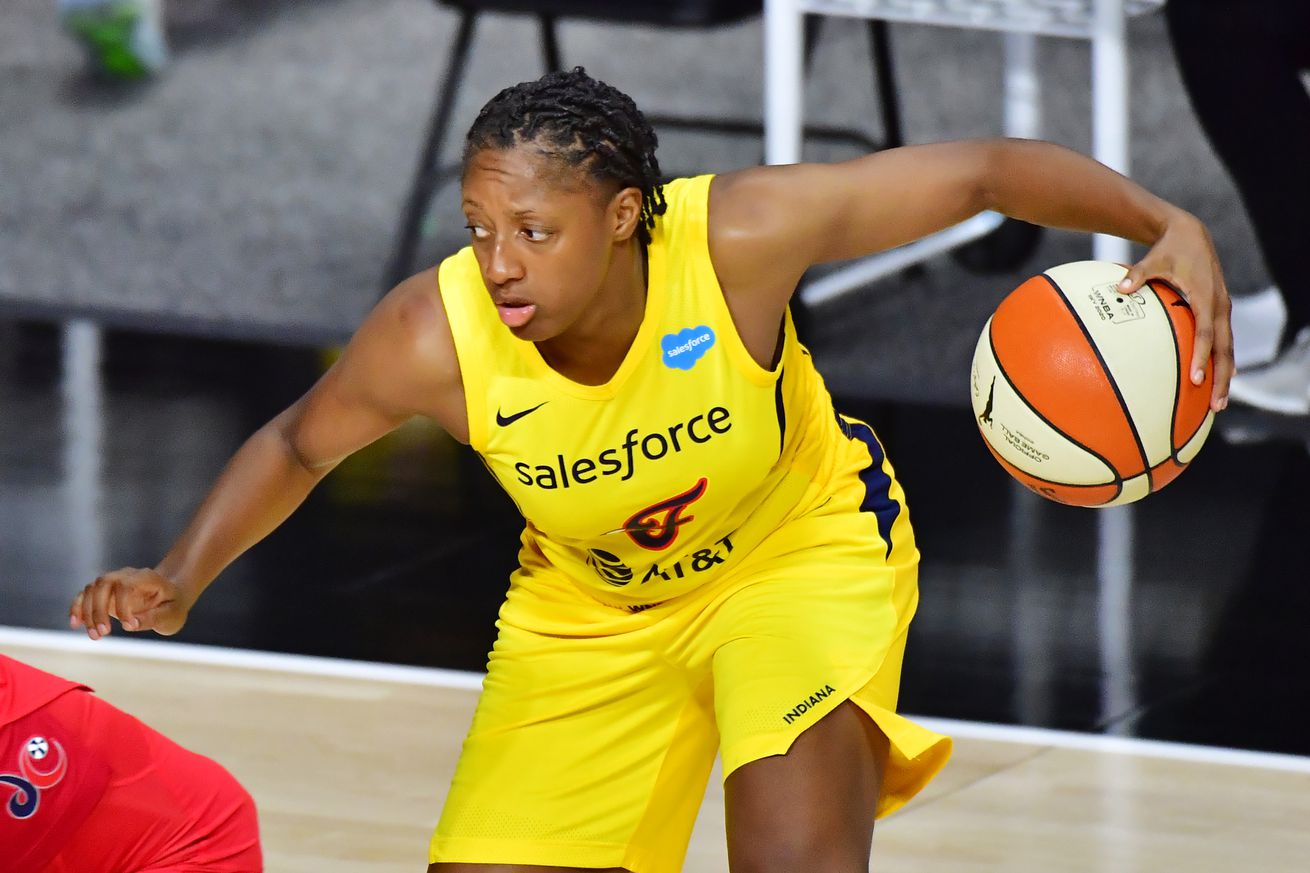 Can Kelsey Mitchell and the Indiana Fever continue to get buckets against a tough Las Vegas Aces defense? | Photo by Julio Aguilar/Getty Images

On Tuesday, the Las Vegas Aces (5-2) seek their fifth-straight win, but holding off a high-scoring Indiana Fever (3-4) team may not be easy. The Washington Mystics (3-4), meanwhile, will attempt to snap a four-game skid against the Minnesota Lynx (5-2). The Los Angeles Sparks (4-3) are after a second-straight victory when they meet the New York Liberty (1-6).

After a brutal start to bubble basketball, the Indiana Fever (3-4) have made the most in-bubble improvements. Since their season opening loss, the Fever have been competitive in all contests, even as they have yet to consistently translate this competitiveness into victories.

Tuesday evening’s game will test the Fever’s quality, as they meet a Las Vegas Aces (5-2) team riding a four-game winning streak at 7:00 p.m. ET on ESPN 2.

A high-octane offense with a league-best 105.3 offensive rating has spurred the Fever’s improved play. And Kelsey Mitchell is the engine of this machine.

While the third-year guard previously had proven herself to be a talented scorer, she now is scoring more efficiently. Her numbers are up across the board. She is averaging a career-best 20.3 points per game on a career-best 48 percent shooting from the field. She also is getting to the line more than before, earning almost four free throws per game and converting them at a sparkling 92.6 percent. Her 3.1 assists per game and 43.8 percent 3-point percentage are career bests as well.

Her scoring excellence was on full-display on Sunday, when she posted a season-high 29 points, bolstered by a four 3-pointers and a perfect nine-for-nine performance from the free-throw line, to push the Fever past the Mystics.

For Mitchell, it is unfortunate that there will be no All-Star selections in 2020, as she likely would be well on her way to her first such honor.

The Aces, however, have a diversity of defenders who can be deployed to slow Mitchell. Vegas head coach Bill Laimbeer can call on the likes of Angel McCoughtry, Kayla McBride and Jackie Young to aggravate Mitchell, while A’ja Wilson and Dearica Hamby also will be roaming around the basket.

If a stout Aces defense (95.9 defensive rating) stalls Mitchell, the Fever might be in trouble. When Mitchell is off the court, Indiana’s offensive rating plummets to a putrid 81.7. Additionally, in spite their admirable improvements, Indy can in no way count on their defense to keep them in the game, as they own the league’s worst defensive rating at 108.3.

So, don’t be surprised if Player of the Week A’ja Wilson again goes off.

A’ja has been absolutely balling in the bubble and has earned @WNBA Player of the Week!

In short, it could be a fun showdown between the 2018 WNBA Draft’s top-two picks.

The Washington Mystics (3-4) desperately need a victory. Their stunning 3-0 start has turned into a frustrating four-game losing streak. Unfortunately, they will have to try to get their sagging offense going against one of the league’s better defensive teams in the Minnesota Lynx (5-2).

Through the season’s first seven games, the Los Angeles Sparks (4-3) have alternated wins and losses. A game against the New York Liberty (1-6) presents the perfect opportunity for LA to break this pattern and win two games in a row for the first time this season.

Key to the matchup: While the Aces already claim one of the league’s best starting star duos in A’ja Wilson and Angel McCoughtry, a promising bench pairing also has emerged for Vegas — Dearica Hamby and Jackie Young. As expected, Hamby, the 2019 Sixth Woman of the Year, has been an effectively disruptive difference maker. More surprisingly, so has Jackie Young. The No. 1 pick in the 2019 WNBA Draft has begun to show why the Aces plucked her with the top pick in a stacked draft. In the past two games, Young not only has put up solid counting stats but also has made positive plays on both ends of the floor, helping the Aces seal and steal two tough wins.

Highlight: Jackie Young comes up big for the Aces in a second-straight game

Jackie goes back-to-back games with 15 PTS finishing the night with 7 REB & 3 AST as the Aces take the 78-76 thriller with the Liberty.@jackieyoung3✖️ #ALLIN ♦️♠️ pic.twitter.com/u1fQijPKzv

Key to the matchup: In contrast to the off-the-bench boost that the Aces enjoy, the Lynx have gotten little scoring from their reserves. Minnesota’s bench problems are due in large part to the missing pieces from their expected starting lineup. Because Karima Christmas-Kelly is out for the season, Shenise Johnson is struggling with a balky hamstring and Sylvia Fowles is dealing with an uncooperative calf, presumed bench players have become starters, with both Crystal Dangerfield and Bridget Carleton filling in admirably. While the upcoming return of Odyssey Sims will improve Minnesota’s depth, other reserves need to step up. In particular, one of the Lynx’s more celebrated offseason acquisitions — Minnesota-native Rachel Banham — has yet to earn the expanded role envisioned for her. However, the Mystics’ reserves have been even more underwhelming, suggesting the Lynx can continue to survive in spite of their lackluster bench play.

Highlight: Crystal Dangerfield has shown no fear as the Lynx’s starting point guard

Key to the matchup: CP3 for MVP? While Candace Parker may not yet be a full-fledged MVP candidate, she has answered any lingering questions about her ability level. At age 34, and following an injury-filled 2019 season, Parker’s fitness and form has been first rate. Her numbers are indicative of her condition, as she currently claims her highest field goal percentage (49.4 percent) since 2011 and is grabbing the most rebounds per game (10.3) of her career. She also is averaging almost four “stocks” (steals + blocks) per game. Her free throw percentage (61.9 percent) and turnovers (three per game) are her only blemishes. Nonetheless, if Parker is locked in, the Sparks should have no trouble dispatching the Liberty.

Feature: ESPN and Holly Rowe provide a peek into how Candace Parker balances both of her jobs while in the bubble

One of the best ballers in the world, @candaceparker is balancing the @wnba season , motherhood and her budding TV career for @nbaontnt @nba @espn @espnw