Preview: Can the feisty Fever again stall the Storm? 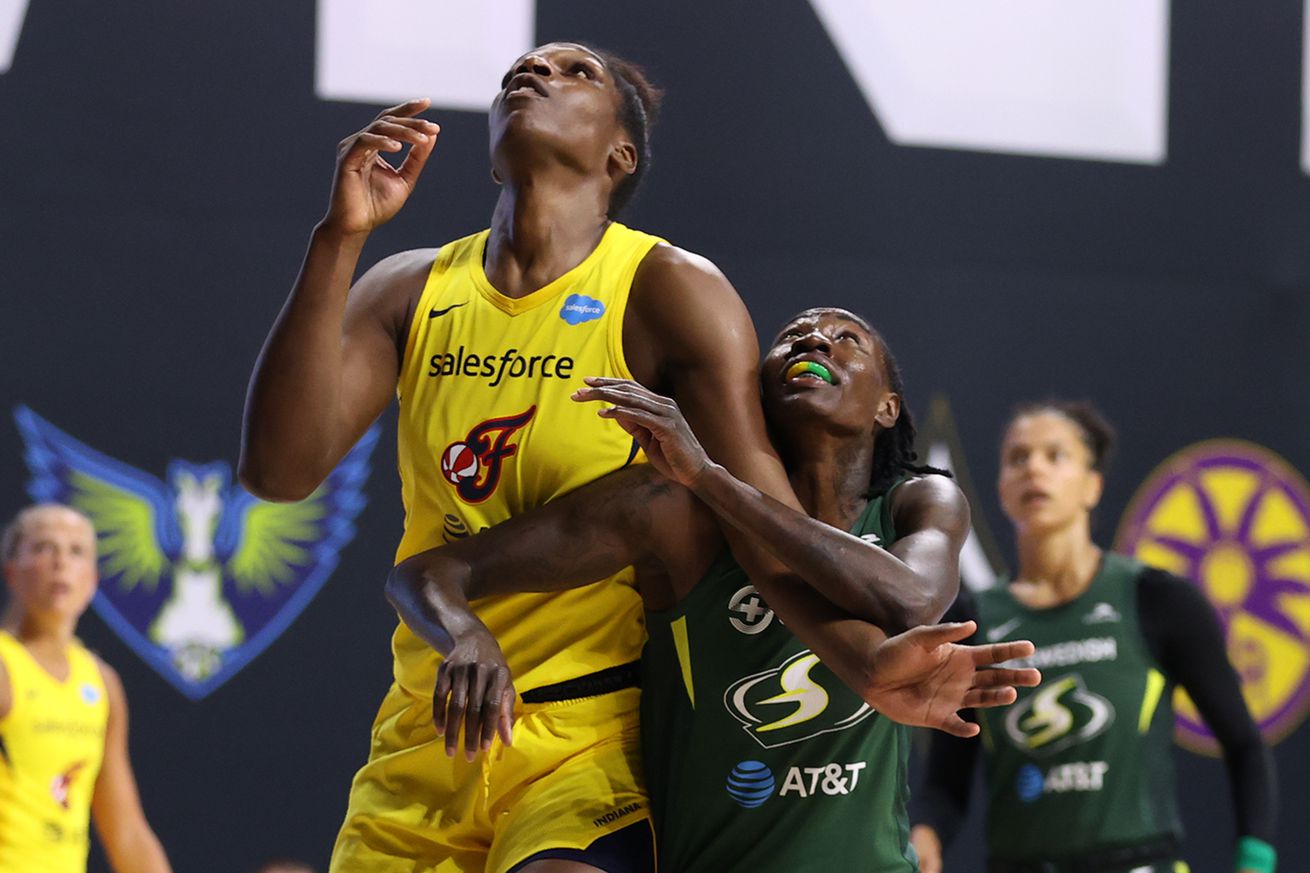 Teaira McCowan battles Natasha Howard for the board during Indiana’s upset win over Seattle. Control of the glass could be determinative in Tuesday’s Fever-Storm rematch. | Photo by Stephen Gosling/NBAE via Getty Images

An unexpected benefit of the cramped confines of the wubble could be the burgeoning of unexpected rivalries, such as the one that is bubbling between the first-place Seattle Storm (11-3) and eighth-place Indiana Fever (5-8).

Tuesday night’s matchup (9 p.m. ET, ESPN 2) between two teams at opposite ends of the playoff picture is a must see.

Last week, the Fever not only snapped the Storm’s nine-game winning streak but they also were ready to let everybody know how they felt about it. Kennedy Burke, who led Indy with a career-high 23 points, called out Sue Bird, suggesting (inaccurately) that the Seattle legend sat out against Indiana out of disrespect for, or at least unconcern about, the Fever. Head coach Marianne Stanley also brought the fire to her post-game Zoom conference, declaring:

I know, I know, nobody except us in this damn building expected us to win. Shame on everybody!….We just taught you a lesson. Yeah, I’m pissed cause I gotta good team.

The Storm, a team of champions, likely would laugh off any notion of a rivalry. However, this is exactly the kind of attitude that will further motivate Stanley and the Fever, especially since Bird, who again is listed as questionable for Tuesday’s contest, fired a subtle shot at Indiana in her explanatory interview with ESPN’s Holly Rowe:

Sue Bird takes a couple shots at the Fever “I’ve never based my decision on my body on another team, especially not Indiana” and pays tribute to Diana Taurasi pic.twitter.com/q7tKehabK7

Can the Fever pull off another improbable upset? Or will the Storm win with authority, ensuring that they hear no more chirping? That Seattle will be seeking to avoid of third-straight loss should add some extra spice, giving Indiana extra inspiration in their upset bid.

To again defeat the Storm, the Fever will need the two big advantages they enjoyed last Thursday — excellent 3-point shooting and aggressive offensive rebounding. Stanley has the personnel needed to earn these competitive edges.

This season, Kelsey Mitchell is the WNBA’s most prolific 3-point shooter, having hit a league-high 37 treys. She averages 2.8 3-point makes per game, converting them at 41.1 percent. The last game of the 2019 regular season, she exploded for a single-game record nine 3s, evidence of her bombastic 3-point shooting abilities.

If Teaira McCowan is engaged, she can captain the Fever’s control of the offensive glass. By percentage, the Fever are the W’s best offensive rebounding team, led by McCowan grabbing a league-best 15.6 percent of offensive boards when she is on the floor. Against the Storm, the Fever must earn, and then cash in on, as many second-chance scoring opportunities as possible.

However, a third advantage the Fever likely will need — another subpar shooting performance from Breanna Stewart — might be out of their control. Yes, Indiana can slow Stewart with focus and physicality; however, the 2018 WNBA MVP is the best women’s basketball player in the world because of her unguardability. Her length allows her to shoot and score over anyone, casually dismissing even the most determined defenders.

Furthermore, while the Las Vegas Aces bested the Storm on Saturday despite a big scoring performance from Stewie, the Fever, with their 109.6 defensive rating, do not have the overall defensive versatility and capability of the Aces, a combination that is needed to account for the Storm’s other offensive weapons. Instead of hoping a good-shooting team again shoots poorly, you must do all you can to make them shoot poorly. Indiana has not shown that kind of defensive upside.

But let’s hope we get another battle, with a fired-up Fever team again disrupting the Storm’s haughty dominance. However, don’t be surprised if Stewart and Seattle reassert their superiority, avoiding any possibility of three-game skid with a blowout win.

After their big, down-to-the-wire win over the Las Vegas Aces last Tuesday, the Chicago Sky avoided the dreaded letdown game, a sign of a great team. Thursday, they dispatched the New York Liberty, 101-85. Tuesday night, they should do the same, securing a fifth-straight win without any stress.

Can the Dallas Wings keep a lead? Of late, the Wings have shown the promise and peril of their youth. In their last three games, Dallas has established double-digit leads only to see these advantages extinguished. They ended up dropping two of these games, and had to go to overtime to win the other. So, even if the Wings take a big lead, this game will be far from over, especially against a team of the Aces’ quality.

How to watch: CBS Sports Network, The U, Fox Sports Go (NY)

Key to the matchup: For the Chicago Sky, it’s Courtney Vandersloot. It’s always Sloot. The Player of the Week is the skeleton key for the Sky’s offensive, unlocking things for her teammates with her ability to penetrate, pass and, of late, score points. However, for the sake of the Sky’s upside, their offense also needs to figure out how to operate at a high level when Vandersloot sits. A game against the New York Liberty could be an opportunity to give Sydney Colson and Gabby Williams more time at the controls of the Chicago offense.

.@Sloot22 with another dazzling night. pic.twitter.com/PxUVQVJIFs

How to watch: CBS Sports Network, My LVTV

Key to the matchup: Last week, the Chicago Sky successfully troubled A’ja Wilson, using 6’6’’ Azura Stevens and a liberal dose of double teams to force the Las Vegas Aces’ MVP candidate into an inefficient night. On Saturday, Wilson showed that she had absorbed the lessons of Chicago’s strategy, quickly cracking the double teams sent by the Seattle Storm. Can the Dallas Wings find another way to frustrate Wilson? Their chance depends on Bella Alarie, who is 6’4’’ with solid defensive instincts. However, that means Dallas head coach Brian Agler must increase Alarie’s playing time. Like many members of the Wings, the No. 5 pick in 2020 draft has seen her minutes fluctuate. A matchup with Wilson is the kind of tough test the Dallas brass should want to see Alarie take on, even if Wilson schools the rookie a time or two.

⠀ ⠀ Under Armour’s newest signee, Bella Alarie, has been killing it, on and off the court, all while rocking heat. ⠀ Tap in to check out some of @bella_alarie’s kicks inside the bubble, and catch a closer look at the first-ever UA women’s basketball shoe! ⠀ #MadefortheW #MadeKicks #WNBAKicks #MFTW #NBAKicks #WNBA #NBA #KOTD #Sneakerhead #Sneakers @uabasketball

Key to the matchup: Last week against the Seattle Storm, the Indiana Fever’s Natalie Achonwa had her best game of the season. Coming off the bench, Achonwa was a game-high plus-14, scoring 14 points, grabbing six rebounds and tossing four assists. At moments, she did an imitation of the best version of the Denver Nuggets’ Nikola Jokic, serving as the hub of the Fever’s offense by setting and slipping screens, executing hand offs or rotating the ball to an open shooter. This high-movement offense effectively created crevices in the Storm’s often overwhelming, aggressive defensive, allowing the Fever to survive Kelsey Mitchell’s low-scoring first half.

Highlight: Achonwa partners with Kathleen Doyle for the sneaky bucket