Preview: It’s the Storm and Mystics in battle of the unbeaten 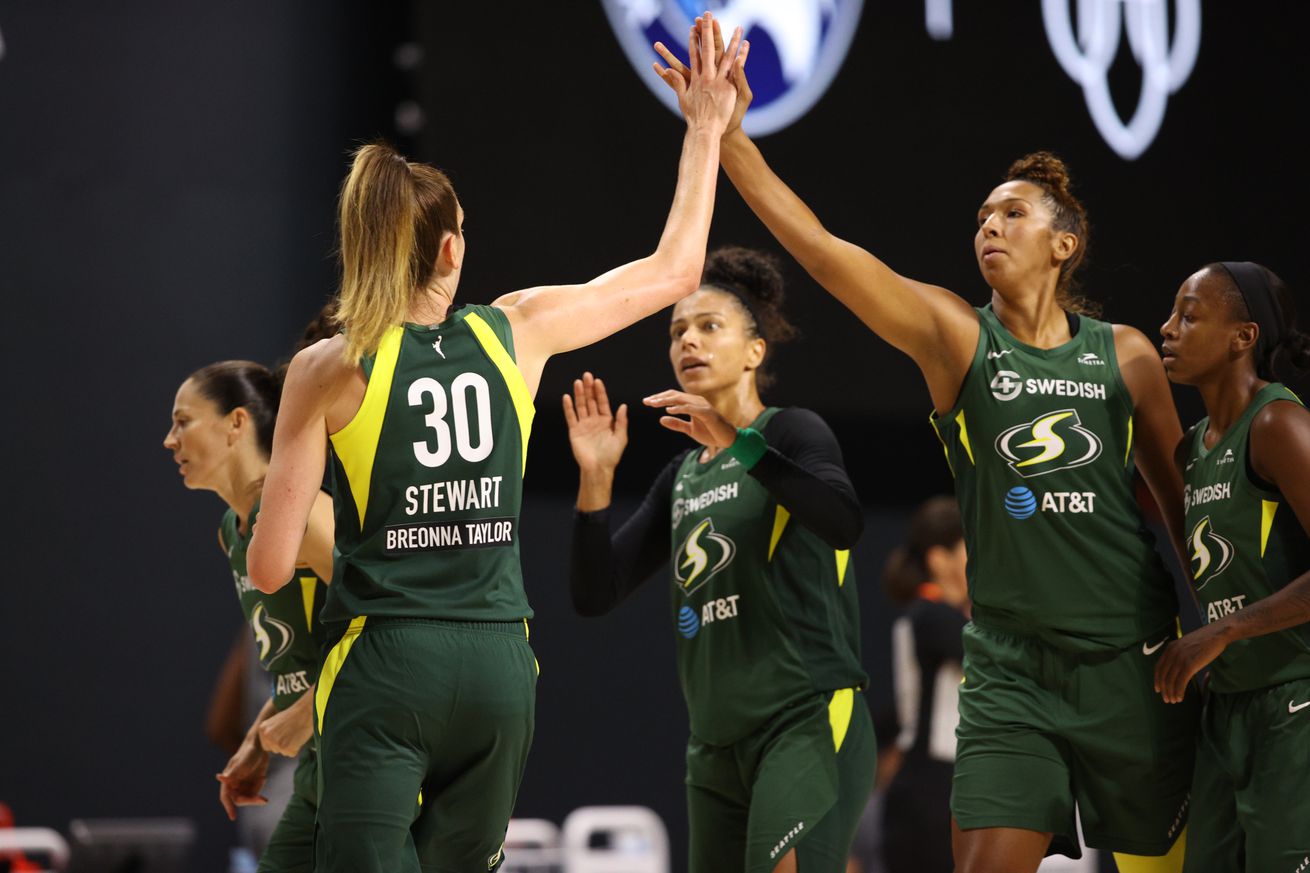 Breanna Stewart has looked sharp in her return from an Achilles injury this far, averaging 18 points and 9 rebounds per game. | Photo by Ned Dishman/NBAE via Getty Images

Thursday night’s game between the Seattle Storm and Washington Mystics — the WNBA’s 2018 and 2019 champions, respectively — will be must-see TV. Both teams have started the 2020 season with 2-0 records.

A little under a week into the 2020 WNBA season, and the league’s twelve teams are seemingly all over the place with regards to roster health and conditioning. Lack of a true preseason has been evident in the play of most teams as they adjust to life in IMG Academy’s “bubble” on the fly.

The Seattle Storm, however, have seemed fairly impervious thus far. With the return of a healthy Breanna Stewart and Sue Bird, the Storm have a wealth of talent and — perhaps just as importantly — a full roster. They’re one of just three WNBA teams (Dallas and Los Angeles the others) with a full 12-player squad. It’s probably no surprise that they’ve started the season 2-0.

The Washington Mystics don’t have such depth, currently rolling with only ten players, and their biggest star in Elena Delle Donne is sitting out the 2020 season, but they have also won their first two games. In fact, Washington has fielded the best offense in the WNBA up to this point, scoring 113.4 points per 100 possessions.

Thursday night’s game between the two teams, then, will be a good measuring stick for both. In particular, the Mystics’ Myisha Hines-Allen has been absolutely incredible to start the season, averaging 21.5 points and 9 rebounds per game in her first two contests — can she keep it going against Stewart, who appears to be back to 2018 MVP form? And from a broader perspective, will Washington’s offense continue humming against a Seattle defense that has stifled opponents (84 points allowed per 100 possessions) thus far?

Tune in to ESPN to find out in this battle of the unbeaten.

Keys to the matchup: Mystics offense vs. Storm defense. This might be a little simplistic — the Storm have not exactly been slouches offensively, either — but the way the Mystics have been able to space the floor will test Seattle’s defense in a way it has not been tested to this point. Interestingly, the Mystics have only assisted on 48.6 percent of their baskets thus far, which makes their team offense seem less sustainable. They’ll have to be crisp with their ball movement against a Storm defense that has forced a turnover on 25.8 percent of opponents’ possessions.

Highlight: Powers with the nice dish to Hines-Allen

got ’em all fooled pic.twitter.com/iAe27yrL4K

Keys to the matchup: The Lynx will need to get more out of their lead guard position to match the production of Chicago’s Courtney Vandersloot, who is averaging 10.5 assists through her first two games. Similarly, Sylvia Fowles has been a beast on the boards for Minnesota at 14.5 rebounds per game; the Sky probably won’t be able to defend her one-on-one.

Highlight: Vandersloot gets creative with the finish

Made ya look. @Sloot22 pic.twitter.com/RPfFUqYYCc

Keys to the matchup: Can Connecticut put together a full 40 minutes? Alyssa Thomas and DeWanna Bonner make a formidable tandem for the Sun, but the team’s lack of depth has bitten it badly in each of its two losses. Meanwhile, Sparks head coach Derek Fisher isn’t afraid to go to his bench; guard Brittney Sykes is off to a torrid start to the season, averaging 13 points per game on 64.3 percent shooting.