Paige Bueckers and the elite Gatorade H.S. Athlete of the Year club 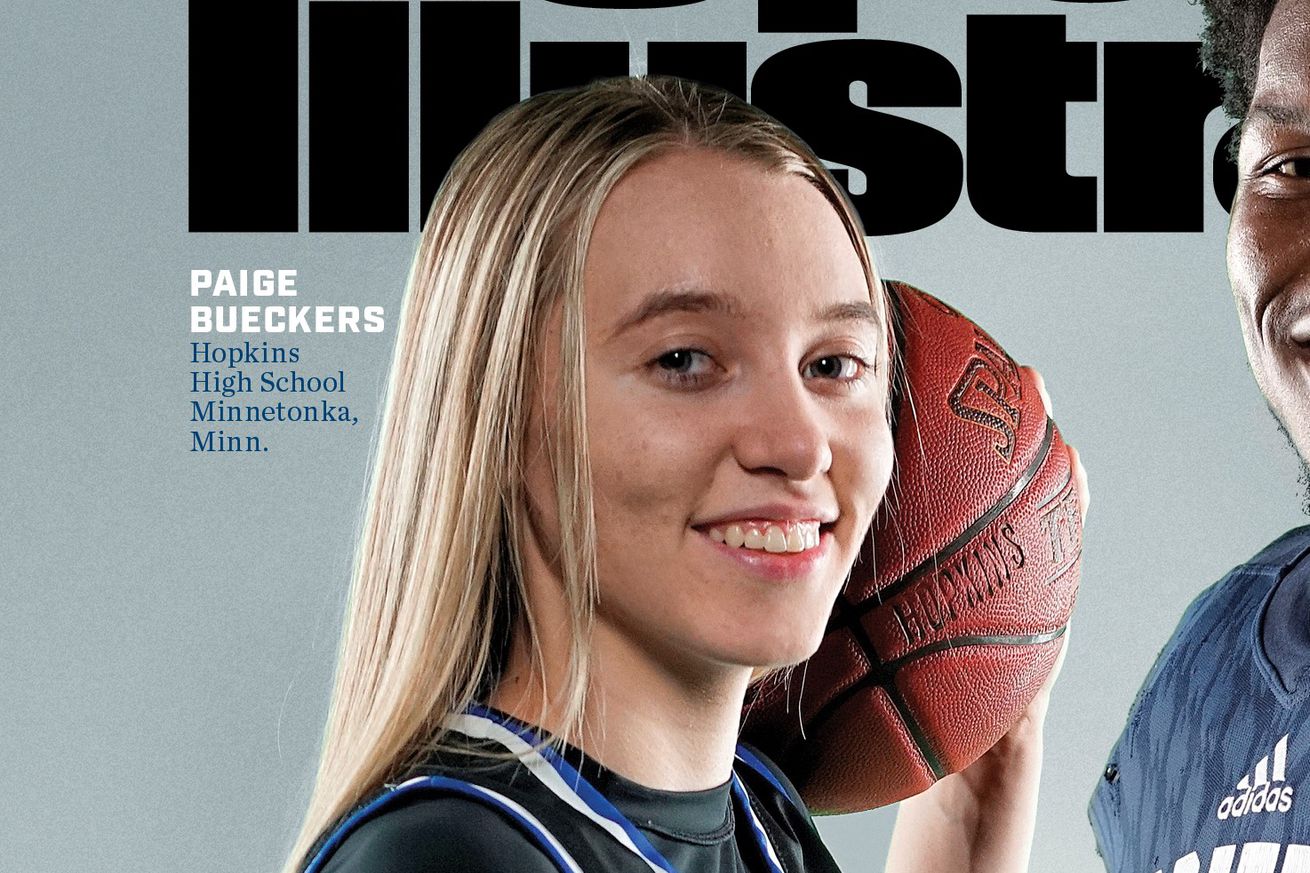 Paige Bueckers has capped her outstanding high school basketball career at Minnetonka, Minnesota’s Hopkins High School with the 2020 Gatorade High School Athlete of the Year award. The history of the award’s winners suggests Bueckers is slated for big things, both at UConn and beyond.

With the launch of the 2020 WNBA season, the world of women’s basketball is focused on the now. But Paige Bueckers has got next!

The Minnetonka, Minn., native and UConn commit was named the the Gatorade High School Athlete of Year.

Established in 1985, the award “recognizes the nation’s most elite high school athletes for their accomplishments on and off the field.” Bueckers is the first girls’ high school basketball player to win the award since 2014.

Over the course of her four-year career at Hopkins High School, Bueckers accumulated honors and achievements while playing with a swagger resembling another UConn great: Diana Taurasi. As a senior, Bueckers averaged 21 points, 9.2 assists, 5.2 steals and 5.1 rebounds per game as she led the Hopkins Royals to a 30-0 record. Only the coronavirus prevented Bueckers and Hopkins from claiming the Minnesota Class 4A state championship.

Her other accolades include:

“This is the most prestigious one,” Bueckers said of adding the Gatorade Athlete of the Year award to her trophy case. “(I)t’s probably sitting right at the top there.”

Bueckers is not satisfied, though.

“My mentality is, like, I want to go in there prove why I got these high school awards and gain everybody’s respect,” she said of her intentions with the UConn Huskies.

Bueckers’ ambitions extend beyond the court as well. On joining the impressive list of athletes who won the Gatorade High School Athlete of the Year award, she noted, referencing former Husky Maya Moore specifically:

It’s amazing just to be in the likes of those people. I mean, obviously, they’ve done really great things with their career, not only on the court but off the court as well.

As evidenced by her “Buckets with Bueckers” youth basketball clinics, which offer free admission and raise money for charities, she is ready to assume the “More than an Athlete” mantle. “That’s something I want to do when I get older — is to do great things on and off the court,” she said.

To imagine the great things she might do, here’s what the seven current WNBA players who received the Gatorade Athlete of the Year Awards have achieved, both on and off the court.

Hailing from Pearland, Tex., Brianna Turner was an integral, efficient contributor for several, excellent Notre Dame teams. She overcame a ruptured ACL, returned to the court for the Fighting Irish and earned a first-round selection in the 2019 WNBA Draft. A 2019 WNBA All-Rookie Team selection, Turner enters the 2020 as a frontcourt starter for the Phoenix Mercury.

Ahead of her second professional season, Turner also has emerged as strong voice for social justice, using her status as the daughter of police officers to speak out against the “pandemic of police brutality.”

Only 25 years old, Breanna Stewart already has compiled one of the greatest careers in women’s basketball history. As she led the UConn Huskies to an unprecedented four national championships, the Syracuse, N.Y., native accumulated numerous All-American, Player of the Year and other individual honors. At the professional level, the No. 1 pick in the 2016 WNBA Draft only has expanded her excellence, capturing the WNBA MVP, Finals MVP, and title in 2018 championship, among other accolades. The early returns suggest that there is more to come from Stewie; an Achilles injury in 2019 has not seemed to slow her down.

Stewart also has established herself as an unhesitating advocate for a spectrum of social causes, supporting efforts for racial justice, abortion rights, LGBTQ+ equality and the dignity of sexual abuse survivors.

Chiney Ogwumike one-upped her older sister Nneka, who only was named the Gatorade National Basketball Player of the Year. However, Chiney followed her sister from Cypress, TX to Stanford, where she became the school’s all-time scoring leader, and then to the WNBA as the first selection in 2014 draft by the Connecticut Sun. After winning the 2014 WNBA Rookie of the Year award, Ogwmuike suffered through two horrific injuries before returning to the court in all-star form in 2018.

Ahead of the 2019 season, she took her talents to Los Angeles and the Sparks in order to better combine her on-court goals with her off-court ambitions — a media career. Through her position with ESPN, she has emerged as example and advocate for the representational power of women of color, choosing to sit out the 2020 WNBA season to illuminate the importance of these women to sport and society.

After a superb high school career in South Bend, IN, Skylar Diggins-Smith headed down the road to Notre Dame, where would re-write the Fighting Irish record book. A two-time Nancy Lieberman Award winner, Diggins-Smith would be one of the WNBA’s “Three to See,” selected third by the Tulsa Shock in the 2013 draft. In Tulsa and then Dallas, Diggins-Smith showed herself to be one of the league’s most determined players, winning the 2014 Most Improved Player award in 2014 before earning multiple All-WNBA honors. Now, she forms a new “Big Three” in Phoenix.

During her tine in the W, Diggins-Smith has emerged as an unapologetic advocate for a number of issues. She has stridently spoken out for equitable pay for all women before championing the importance of maternity leave and support mothers. Recently, she also has joined LeBron James’s “More Than a Vote” campaign.

One of the most sought after recruits in the history of women’s basketball, Maya Moore did not disappoint during her time in Storrs, capturing an array of individual awards as she captained the UConn Huskies to a pair of national titles. The No. 1 pick in the 2011 WNBA Draft, Moore, instantly, continued her winning ways, helping to lead the Minnesota Lynx to the first of four WNBA titles in her rookie season. Along the way, she added, among other honors, a MVP and Finals MVP to her resume.

Incredibly, Moore has matched her illustrious on-court achievements with impactful off-court efforts. She has raised the standard of athlete activism, stepping away from the sport to go on faith-based, justice-filled journey that has included securing the freedom of Jonathan Irons.

A product of Jamaica, NY, Tina Charles teamed with Moore to take UConn to two titles. After winning the Wooden Award her senior season, Charles was drafted No. 1 in the 2010 WNBA Draft by the Connecticut Sun. The 2010 Rookie of the Year quickly became the anchor of a series of excellent Sun teams. However, after four all-star level seasons in Connecticut, including an MVP season in 2012, Charles headed home, becoming the heart and soul of the New York Liberty. Having done everything except win a title, she departed for DC this offseason, seeking to be part of a championship-caliber Washington Mystics team beginning in 2021.

While in New York, Charles became one of the W’s consciences. A leader of players’ 2016 protests against police brutality, Charles later would work with the Liberty to organize various social justice initiatives. She also flashed a creative side, directing a film about her father’s role in the Brooklyn music world.

Out of Naperville, IL, Candace Parker would go on to epitomize what it means to wear the orange and white of the University of Tennessee. After winning two titles, as well as a collection of individual awards, on Rocky Top, Parker would remain one of the most dedicated disciples of the late, great Pat Summitt. By practicing the principles that Summitt preached, Parker has compiled a standout WNBA career, highlighted by the 2016 WNBA championship. The No. 1 pick in the 2008 WNBA Draft, the LA Spark living legend also is one of only five players to win more than one MVP. And she’s not done yet.

Off the court, Parker has become one the industry’s smartest basketball analysts, all while serving as an uncompromising voice of clarity on a number of social justice issues. She’s also an awesome mom!