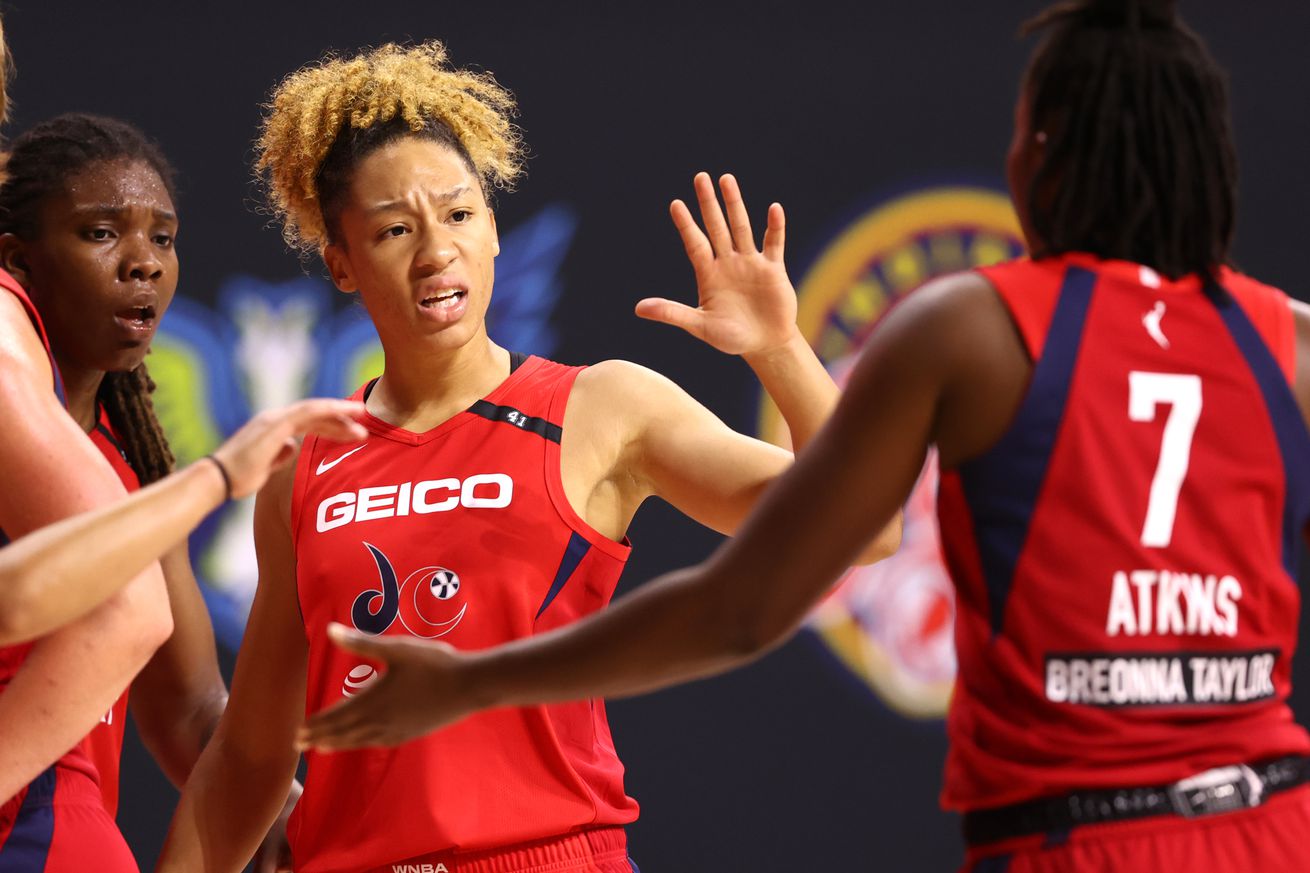 Led by the Aerials/Ariels, the Washington Mystics have marshaled an admirable early-season defense of their 2019 WNBA title. | Photo by Ned Dishman/NBAE via Getty Images

The Washington Mystics (3-1) meet the Las Vegas Aces (2-2) in Wednesday night’s most intriguing matchup. The Minnesota Lynx (3-1) also will look to take care to the New York Liberty (0-4), while the Indiana Fever (2-2) and Los Angeles Sparks (2-2) will do battle.

The Washington Mystics (3-1), the most pleasant surprise of the first week and change of “wubble” action, will aim to start another winning streak when they meet the Las Vegas Aces (2-2) Wednesday evening at 8:00 p.m. ET. The game will be aired on NBA TV.

The depleted defending champions have combined the principles of head coach Mike Thibault’s 3-point heavy space-and-pace offensive and a spirit of pride and urgency, embodied by Player of the Week Myisha Hines-Allen, to trouble all opponents, including the league’s assumed elite in the Seattle Storm.

The Aces present interesting an matchup, as the teams have contrasting offensive styles.

Starting the third quarter off with some threes pic.twitter.com/1pYPlicDOK

This results in a high-variance offense, with scoring spells driven by shots from behind the arc often matched by droughts from deep. Washington thus is susceptible to letting the big leads they establish slip away. Although Hines-Allen, Aerial Powers and Ariel Atkins have taken significant leaps as scorers, DC lacks a fail-safe isolation offensive option, a role occupied by Elena Delle Donne in 2019.

Vegas may be able to take advantage of Washington’s weak points.

The Aces nearly eschew the 3-pointer, taking a league-low 10.8 per game. Instead, they rely on the transition game to create easy 2-point scoring opportunities, playing at the league’s fastest pace. They dominate the defensive glass, grabbing the rebound and getting the ball to Lindsay Allen so she can find the likes of A’ja Wilson or Dearica Hamby for a hit-ahead bucket under the basket. In the half court, the Aces can go to Wilson on the block or turn things over to Angel McCoughtry, with her still-elite ability to take and make tough shots.

Even as Vegas lacks Washington’s offensive electricity, the ways the Aces generate consistent offense, in combination with their stout defensive, could situate them to hand the Mystics a second-straight defeat.

The Liberty (0-4) were oriented around Sabrina Ionescu. With the No. 1 pick out for at least one month with a Grade 3 left ankle sprain, New York must find a way to win, or at least stay in, games without her. Liberty head coach Walt Hopkins might need to glean some additional advice from his old boss, Lynx head coach Cheryl Reeve. Despite several injuries, Minnesota (3-1) has squeezed out three victories.

After opening the season with an ugly performance, the still-shorthanded Fever (2-2) have righted the ship, showing fight in their subsequent three games. Thus far, the Sparks (2-2) of 2020 recall the Sparks of 2019. While they have looked like championship contenders in some games, they have been uninspiring in others. LA will need to be the better version of themselves to hold off Indy.

Key to the matchup: For the Liberty to win, they need Sylvia Fowles to be Sylvia Fouls. So far this season, Fowles has been superb. The league’s all-time leading rebounder has controlled the glass and, in turn, controlled games for the Lynx. Overall, Minnesota has a net rating for -0.7. When Fowles is on the court, her team has a net rating of 4.0. When she is off the court, often due to foul trouble, the Lynx have a net rating of -12.0. While it is unwise to draw definitive conclusions from a still-small early-season sample size, it seems clear that Fowles is the key to Minnesota’s success.

Highlight: Sylvia Fowles is a force to be reckoned with

Key to the matchup: The seemingly interminable WNBA offseason featured a flurry of transactions. Overlooked in all this activity was the Aces’ signing of Lindsay Allen. A somewhat surprising starter in place for the injured Kelsey Plum, Allen, who missed the 2019 season due to injury, has thus far been excellent. She has successfully replicated Plum’s ability to push the pace. Playing the most minutes of her career, Allen’s numbers have improved across the board, highlighted by a true shooting percentage of 55.7 percent. Against DC, she should again flash her value to Vegas. Although only 5’8’’ herself, Allen will have a significant size advantage over Leilani Mitchell, allowing her to penetrate and create for herself and others.

Highlight: Lindsay Allen takes the ball to the hoop

Key to the matchup: The Fever also have benefitted from an underrated-but-excellent point guard addition in Julie Allemand. In her last two games, the Belgian national has proven she belongs in the W. After tossing a season-best 11 assists in a close loss to Dallas, Allemand stuffed the box score in the victory over Atlanta, with 10 points, nine assists, seven rebounds and two steals. Can she outplay the Sparks’ Point Gawd, Chelsea Gray? Currently, the two are tied with 25 total assists, third-best in the league. Gray, however, also is counted on the score the basketball. Thus far, she has struggled with her shot, shooting only 34 percent from the field, including an awful 7.7 percent from 3-point range.

Interview: Julie Allemand relishes the opportunity to refresh after a week of non-stop basketball

“I was almost running in the hotel…I was so excited because yesterday we had a day off.”