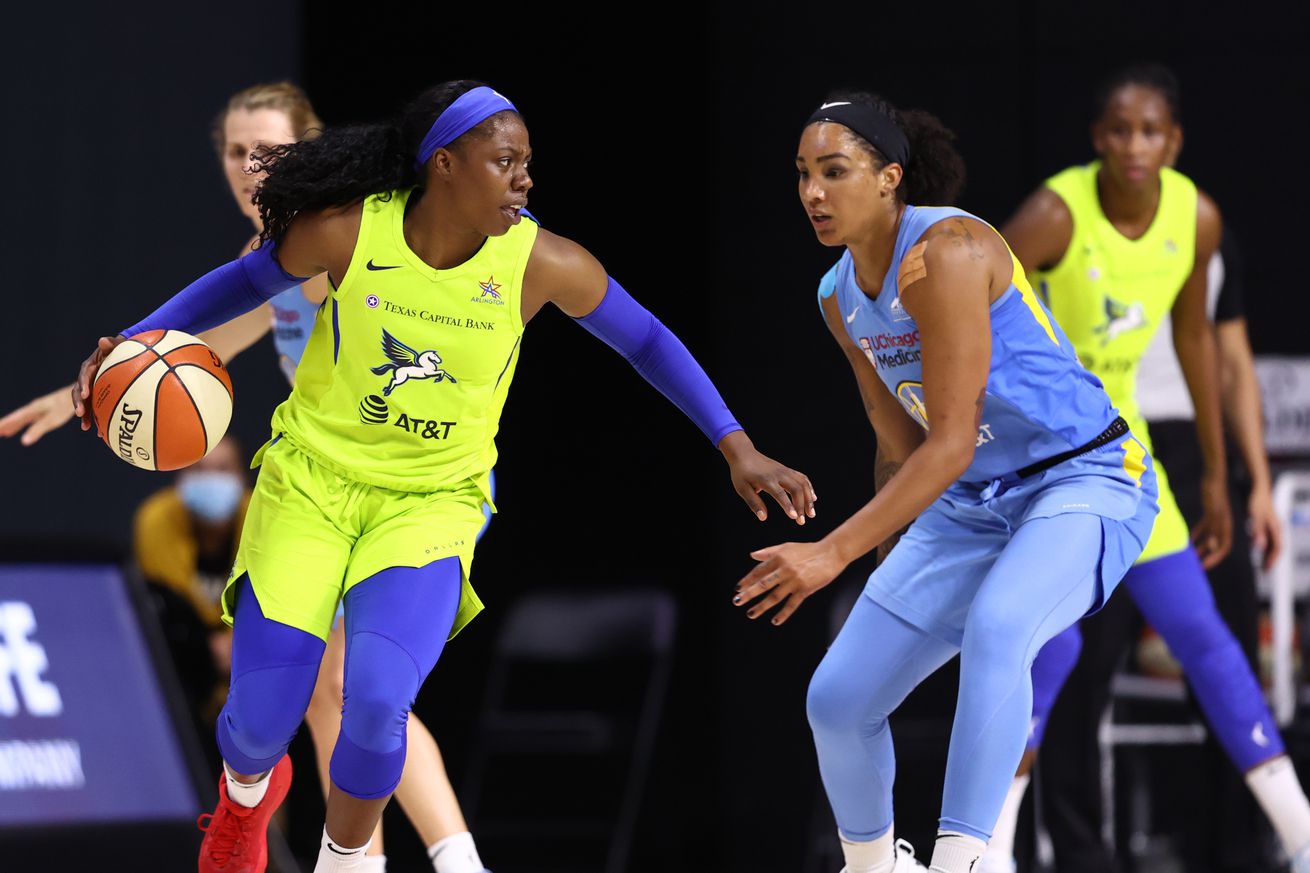 Although Arike Ogunbowale dropped 38 points, the Chicago Sky shut her down when it mattered. | Photo by Ned Dishman/NBAE via Getty Images

Arike Ogunbowale’s 38 points were not enough to get the Dallas Wings a victory as they fell to the Chicago Sky 95-88 and fell behind the Washington Mystics in the race for the eighth and final playoff spot on Friday night at IMG Academy in Bradenton, Florida.

Although already locked into the sixth seed, the Sky were determined to end the regular season on positive note and they snapped their four-game losing streak before their upcoming single-elimination first-round playoff game against the Connecticut Sun.

After an even first quarter (24-24), the Sky established control in the second period due to the play of Cheyenne Parker. Parker netted 13 of her team-high 23 points in the second, draining all three of her 3-pointers in addition to pounding her way to a couple of buckets around the basket.

Chicago carried an eight-point lead (52-44) into the halftime break, and led throughout much of the third quarter. An encouraging sign for the team came in the form of rookie Ruthy Hebard taking over the scoring. She took advantage of the Wings’ undisciplined defense to cash in on multiple cuts, rolls and layups. Hebard’s 14 points in the period were more than her previous career high of 12 points; she would finish with 22 points and eight rebounds.

However, during the final minutes of the third quarter, Ogunbowale began to cook. Tallying 18 points in the period, the second-year scoring maestro helped her squad trim its deficit to one point (75-74) entering the final period of play.

In a second encouraging sign for Chicago, recent addition Alexis Prince kicked off the fourth quarter with five quick points, hitting a 3-pointer before grabbing and going for a 2-point jumper. The Sky thus re-established a more comfortable six-point margin, which they would maintain until another Ogunbowale flurry.

Midway through the fourth, Ogunbowale went on a personal 8-0 run, showing off her ability to get her shot off from anywhere and everywhere on the floor. With four minutes remaining, she swished a pair of free throws that gave Dallas a four-point lead (86-82), and gave her 38 points.

Yet, in a final encouraging sign, Chicago successfully shut down Ogunbowale for the remainder of the game, effectively trapping her to prevent her from scoring another basket. During this final stretch, the Wings severely missed Allisha Gray, who was out with knee soreness. Dallas scored only one more basket, a layup from Kayla Thornton. Thornton finished with 11 points, as did Marina Mabrey. However, eight of Mabrey’s points came in the first quarter, underscoring Dallas’s lack of non-Ogunbowale offensive production in the second half.

Chicago finished the game on a 12-0 run, securing the much-needed confidence-boosting victory.

Unsurprisingly, Courtney Vandersloot’s fingerprints also were all over the Sky’s win. She finished with 15 points and 12 assists, one assist shy of the number needed in order to average 10 assists on the season.

The Sky will re-charge until Tuesday when they meet the Connecticut Sun in the No. 6-vs.-No. 7 first-round playoff game. The Wings will be at it again at 12 p.m. on Sunday when they face the New York Liberty in their regular-season finale.

Spurred by a strong second half, the Atlanta Dream kept their playoff prospects alive with a win over Connecticut Sun, 82-75

The Dream did what they needed to do to remain in contention for the final playoff spot. Before they would cheer on the Sky, they took care of business against a Sun team that was already looking ahead to their first-round playoff matchup against the Sky. Head coach Curt Miller judiciously managed the minutes of his four core players. Although the irrepressible DeWanna Bonner still played 28 minutes, and scored a team-high 17 points, Alyssa Thomas, Jasmine Thomas and Briann January all played well under their season averages.

The Dream took full advantage of the favorable matchup, with head coach Nicki Collen running a tight, seven-woman rotation. After a rather frigid-shooting first half had the Dream trailing by six points at the break, their offense ignited in the third and fourth quarters. Courtney Williams dropped 14 of her 20 points after the break while Chennedy Carter had 13 of her game-high 22 points in the second half. Betnijah Laney also chipped in a double-double of 14 points and 10 rebounds.

Offense, and the fourth seed, eluded the Phoenix Mercury as they felll to the shorthanded but sharpshooting Seattle Storm, 83-60

Prior to Friday night, the Mercury had won seven of their past eight games due an electrified offense. But on Friday night, their offense severely short circuited, resigning them to the fifth seed. The Mercury shot 19.4 percent from the field and 14.3 percent from behind the arc in the first half, resulting in a 50-26 halftime deficit. Realizing it was not her squad’s night, head coach Sandy Brondello decided to prioritize the Mercury’s upcoming first-round single-elimination game against the yet-to-be-determined eighth seed by resting Diana Taurasi and Skylar Diggins-Smith for the remainder of the game.

The Storm, in contrast, were on fire. They did not miss Sue Bird or Breanna Stewart as they shot 52.9 percent from the field and 50 percent from 3-point range. Both Alysha Clark (3-for-3) and Natasha Howard (2-for-2) were perfect from deep while Jordin Canada led Seattle with 13 points. The Storm’s seventh-straight win also keeps them in the driver’s seat for the No. 1 seed.

⛈️ ICYMI: Check out tonight's full game highlights presented by @Symetra as we stormed past the Mercury ⛈️#StrongerThanEver pic.twitter.com/43BBbIRjNr