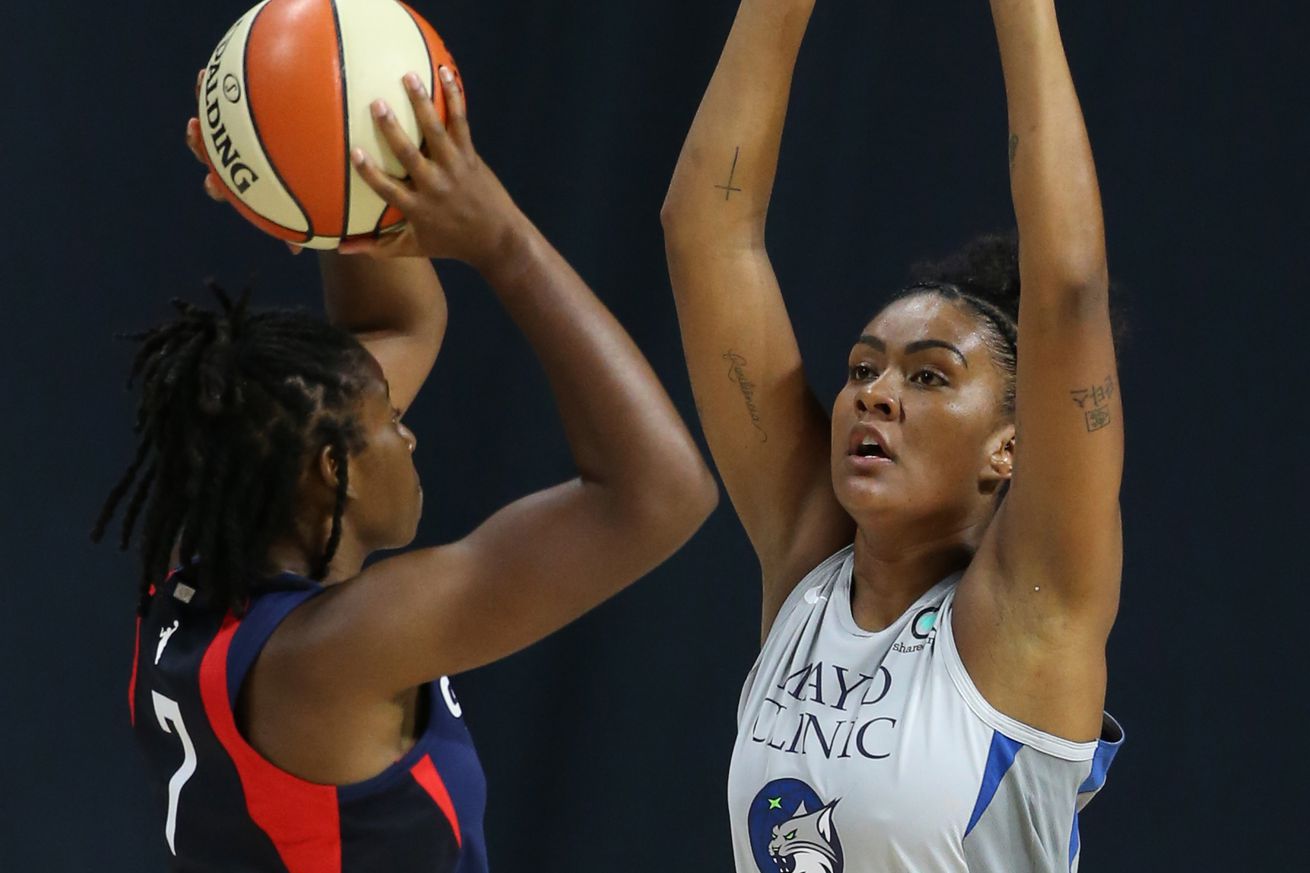 Damiris Dantas (right) had one of just six steals for the Minnesota Lynx against the Washington Mystics. Minnesota also blocked just two shots but forced Washington into cold shooting. | Photo by Stephen Gosling/NBAE via Getty Images

The Minnesota Lynx benefited from the defense of Damiris Dantas and others, while Sylvia Fowles led the team in scoring as it handed the Washington Mystics their fifth-straight loss.

The Minnesota Lynx (6-2) allowed just 48 points and held the Washington Mystics (3-5) to 29.5 percent shooting from the floor in their 20-point win on Tuesday night at IMG Academy in Bradenton, Florida.

The Mystics made 18 field goals and shot 4-of-19 from 3-point range en route to the lowest scoring output for any WNBA team during the 2020 season.

Washington is undersized in the post and Minnesota took advantage of that with Sylvia Fowles scoring 16 points and hauling in 13 rebounds. Reigning Rookie of the Year Napheesa Collier added eight points and 12 boards, while Crystal Dangerfield and Rachel Banham posted 12 and 10 points, respectively, for the winners.

Collier had the following to say regarding her team’s superb defensive effort:

Defense is something that’s always been a part of the Lynx culture, and something we’ve always taken pride in. … Defense wins games, and that’s what Coach (Cheryl Reeve) has been telling us from the beginning. We just need to keep this up.

The Lynx used a 10-0 run at the start of the fourth quarter to pull away after a Tianna Hawkins 3-pointer at the buzzer of the third cut the Mystics’ deficit to eight. Fowles scored six points during the run and a Collier to Banham connection in transition provided the exclamation mark.

Minnesota shot just 38.8 percent from the field, but it got the job done against a Washington defense that also had a very good evening. The Mystics owned a 17-4 advantage over the Lynx in the third quarter after trailing by 21 at halftime.

“We were playing aggressive,” Hines-Allen said of the third quarter. “We were making sure they caught the ball a step off from where they wanted to catch it. … (We) just disrupted their offense and that’s what’s going to help us win these games.”

The Mystics will test their luck against Candace Parker and the 5-3 Los Angeles Sparks on Thursday, just before the Lynx take on one of the hottest teams in the league, the Las Vegas Aces, in a battle of 6-2 teams.

The Aces received a balanced scoring effort led by Angel McCoughtry’s 20 points. Las Vegas, which saw Jackie Young, Kayla McBride, Dearica Hamby, A’ja Wilson and Danielle Robinson all break the 10-point threshold as well, led by just one at halftime but cruised to eight and 10-point margins in the third and fourth quarters, respectively. Candice Dupree scored 20 points for the Fever, who fell to 3-5.

Sydney Wiese (5-of-7), Riquna Williams (3-of-5) and Candace Parker (2-of-3) all made multiple threes for Los Angeles, with Parker notching 16 points, six rebounds, four assists and two steals. New York rookie Jazmine Jones had 24 points and five steals in defeat as her team fell to 1-7.

We don’t know who needs to keep hearing it but: STOP SLEEPING ON SYD @swiesebaby24 | #GoSparks pic.twitter.com/fTFcuH5K8S