Recap: Myisha Hines-Allen got ‘Mystical’ in final minutes to tamp down the Sparks 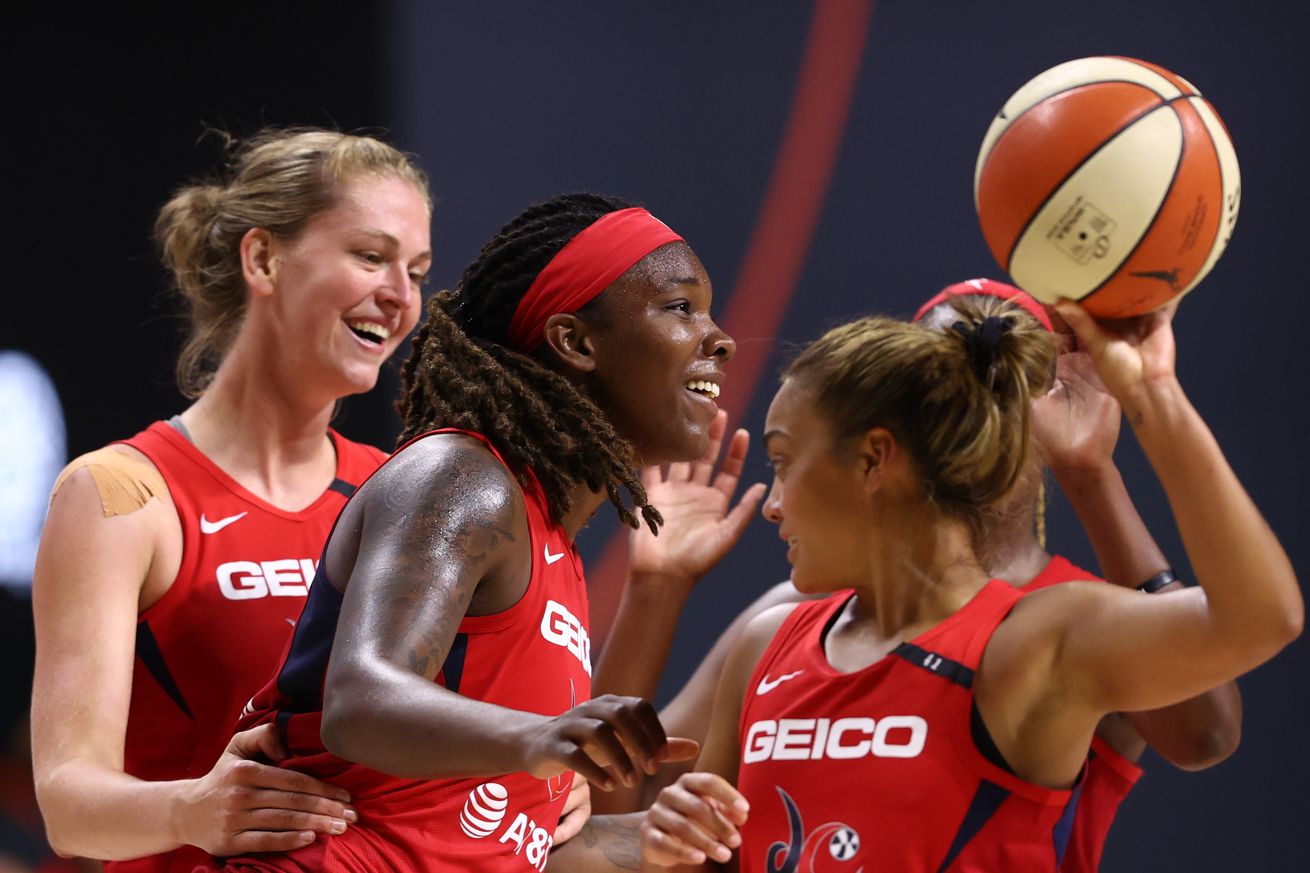 Myisha Hines-Allen (center) made 3-pointers with 1:28 minutes to go to put the Mystics up by four points. With 56.9 seconds remaining, another 3-pointer gave the Mystics a five-point lead and the eventual win. | Photo by Ned Dishman/NBAE via Getty Images

The 7-13 Washington Mystics don’t have a tiebreaker in their favor but they’re now tied in eighth place with the Dallas Wings thanks to clutch shots from Myisha Hines-Allen that sunk the 15-6 Los Angeles Sparks. Also on Thursday night, the 6-15 Indiana Fever earned a victory over the 2-18 New York Liberty at the free-throw line and the 16-4 Las Vegas Aces went outside their comfort zone to top the 13-8 Minnesota Lynx.

The Washington Mystics picked up their second consecutive major upset on Thursday night to put themselves at 7-13, which ties the record of the eighth-seed Dallas Wings. The final 2020 WNBA Playoffs spot, therefore, will likely be decided after each team plays their remaining two regular-season games.

Myisha Hines-Allen’s second 30-point game of the season included two clutch 3-pointers down the stretch and led Washington to the 80-72 win over the third-place Los Angeles Sparks at IMG Academy in Bradenton, Florida.

She hit two BIG-TIME threes in crunch time to lift the @WashMystics to victory! pic.twitter.com/OLt1ncNVmV

“(Myisha) has stepped up against the biggest and best teams and matched them toe-to-toe and outplayed a bunch of them,” Mystics head coach Mike Thibault said of Hines-Allen, whose 30-point, eight-rebound performance greatly improved her chances of winning this year’s Most Improved Player award.

“I’m really proud of what she did tonight,” Thibault added.

Hines-Allen averaged just 7.8 minutes and 2.3 points per game last year but, with many of the stars who played in front of her out for the season, she transformed herself into the Mystics’ go-to scorer, averaging 16.7 points and 8.7 boards per contest.

“It’s just goes back to the things you do when no one’s looking,” Hines-Allen said of her clutch play on Thursday. “When your coaches aren’t there or your teammates aren’t there. … They genuinely trust me to knock down shots now.”

Dallas owns the head-to-head tiebreaker against Washington after winning the season series between the two teams 2-0. However, if the Wings lose to the Chicago Sky Friday night, the Mystics will be able to clinch a playoff spot with wins over the 2-18 New York Liberty and 6-14 Atlanta Dream.

Mike Thibault said he will be a big fan of the Sky today, but added that he’s not overlooking his team’s final two opponents. “It’s a back-to-back,” he said. “We did not play well against New York early on and Atlanta has played great the last few weeks so we still have our work cut out for us. Our focus is going to be more on preparing ourselves for the weekend (than worrying about Chicago).”

The Mystics face the Liberty at 12 p.m. ET this Saturday on NBA TV. One of New York’s two wins this season came against Washington (on Aug. 7). The Sparks’ next contest is a showdown with the second-place Las Vegas Aces that will directly follow the Mystics-Liberty matchup (also on NBA TV). Las Vegas (16-4) defeated the Minnesota Lynx on Thursday. If the Aces lose on Saturday against the Sparks and on Sunday against the Seattle Storm, the Sparks will own the tiebreaker due to having a better record against teams who are .500 or better. The Sparks would claim second place and a double bye.

The Fever made 19-of-20 free throws, while the Liberty made just nine, albeit in a perfect 9-of-9 effort. The Fever’s 10-point advantage at the charity stripe proved to be the difference. Candice Dupree led Indiana with 22 points, six rebounds and seven assists while Paris Kea notched a career-high 21 points in defeat.

Candice Dupree is your Player of the Game #ThisIsBallin pic.twitter.com/2uB13BTfDT

After surrendering 22 points, eight rebounds and six assists to Angel McCoughtry, the Lynx are now tied with the Phoenix Mercury in fourth place with one game remaining for both teams. Crystal Dangerfield scored 24 points for Minnesota, but Vegas received 20-plus point performances from Kayla McBride (21) and A’ja Wilson (20) in addition to McCoughtry. Uncharacteristically, Vegas took 18 threes and made 10 of them, while also being being dominant from the free throw line (20-of-23) as usual.