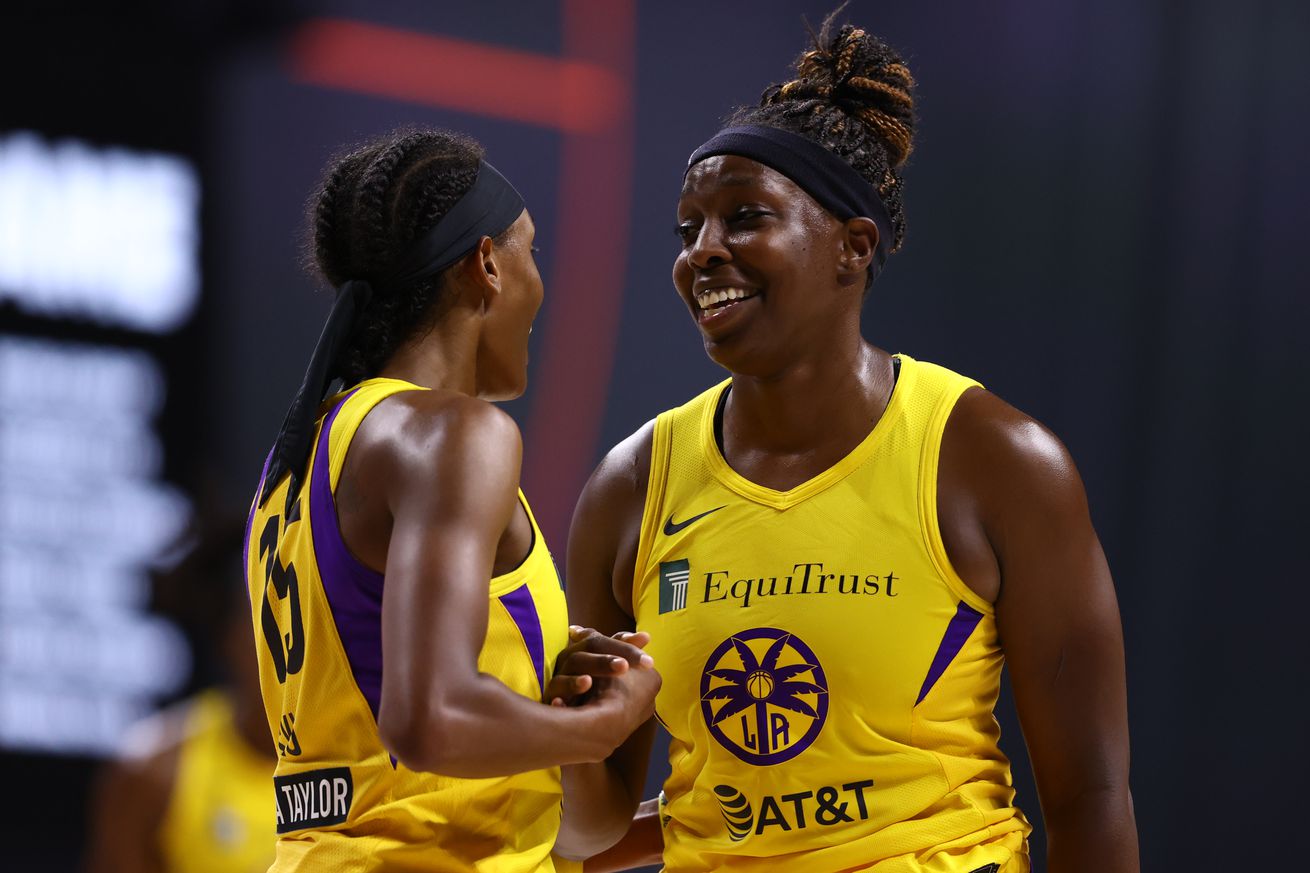 With more than basketball on everyone’s mind, Chelsea Gray (right) welcomed WNBA fans back with a big-time performance. | Photo by Ned Dishman/NBAE via Getty Images

After a game-time decision to not play on Wednesday and a day of reflection on Thursday, the WNBA returned to action on Friday with Chelsea Gray’s season-high scoring effort leading the Los Angeles Sparks past the Connecticut Sun. Meanwhile, the Minnesota Lynx’s UConn tandem came up big in a win over the Atlanta Dream and the Phoenix Mercury blew out the Washington Mystics with a dominant second half.

On Friday night, the WNBA returned from its protest of the police shooting of Jacob Blake and resumed its season with the message of demanding change still at the forefront.

Of the three games played Friday at IMG Academy in Bradenton, FL, the Los Angeles Sparks’ 80-76 victory over the Connecticut Sun made the biggest statement. The Minnesota Lynx and Phoenix Mercury won their games over lesser opponents, as expected, but the Sparks were facing a decent Sun team and had to fight back from a seven-point halftime deficit to prevail in a playoff-type battle. The win moved L.A. into a second-place tie with the Las Vegas Aces.

The Sun are currently in playoff position (as a No. 7 seed) and swept the Sparks in the league semifinals last year. As for this year’s regular season, LA has now swept a pesky foe, with the other win coming by almost the exact same score (81-76) on July 30.

Chelsea Gray was the star of the night with a season-high 27 points — three off her career-high set last year. She was 3-of-5 from beyond the arc after being 6-of-29 on the season entering the contest.

With 1:24 to go Parker drove and flipped in a key inside bucket that put LA up 79-74. The next two Connecticut possessions ended in turnovers; Cooper drew a charge and Brittney Sykes deflected a pass into the hands of Gray. Sykes had already drawn two charges in the final 2:07, so it truly was that type of toughness that won the game for the Sparks. Connecticut star DeWanna Bonner cut the lead to 79-76 with a layup at the 12.6 second mark, but a free throw from Gray with 8.5 ticks remaining sealed the victory for L.A.

Alyssa Thomas did a fantastic job on Parker on the defensive end and led the Sun in points with 19 and both teams in rebounds with nine.

The games that were postponed on Wednesday and Thursday have been rescheduled for Aug. 31, Sept. 7 and Sept. 13.

The Sun will face the Mystics in a rematch of last year’s WNBA Finals at 4 p.m. ET on Sunday with hopes of splitting the season series. Meanwhile, the Sparks could be shooting for sole possession or a share of first place when they take on the the Dream at 8 p.m. ET later that night.

Crystal Dangerfield (23 points) and Napheesa Collier (19 points, 12 rebounds) represented the UConn Huskies admirably and helped fend off a late comeback by Atlanta. Meanwhile, Odyssey Sims nearly notched a triple-double for the Lynx with 17 points, nine assists and seven rebounds. Betnijah Laney had 22 points and five assists for the Dream, who cut their deficit to six four times in the fourth quarter.

With the win, Minnesota moves to 10-4 on the season, marking the eighth time in 10 years the #Lynx have posted 10+ wins in their first 14 starts. Best after 14:

Skylar Diggins-Smith posted six assists and six triples for a Mercury team that was down by eight at halftime. She finished with 24 points and just two misses from beyond the arc. Leilani Mitchell scored a season-high 17 points and dished out five assists in defeat.