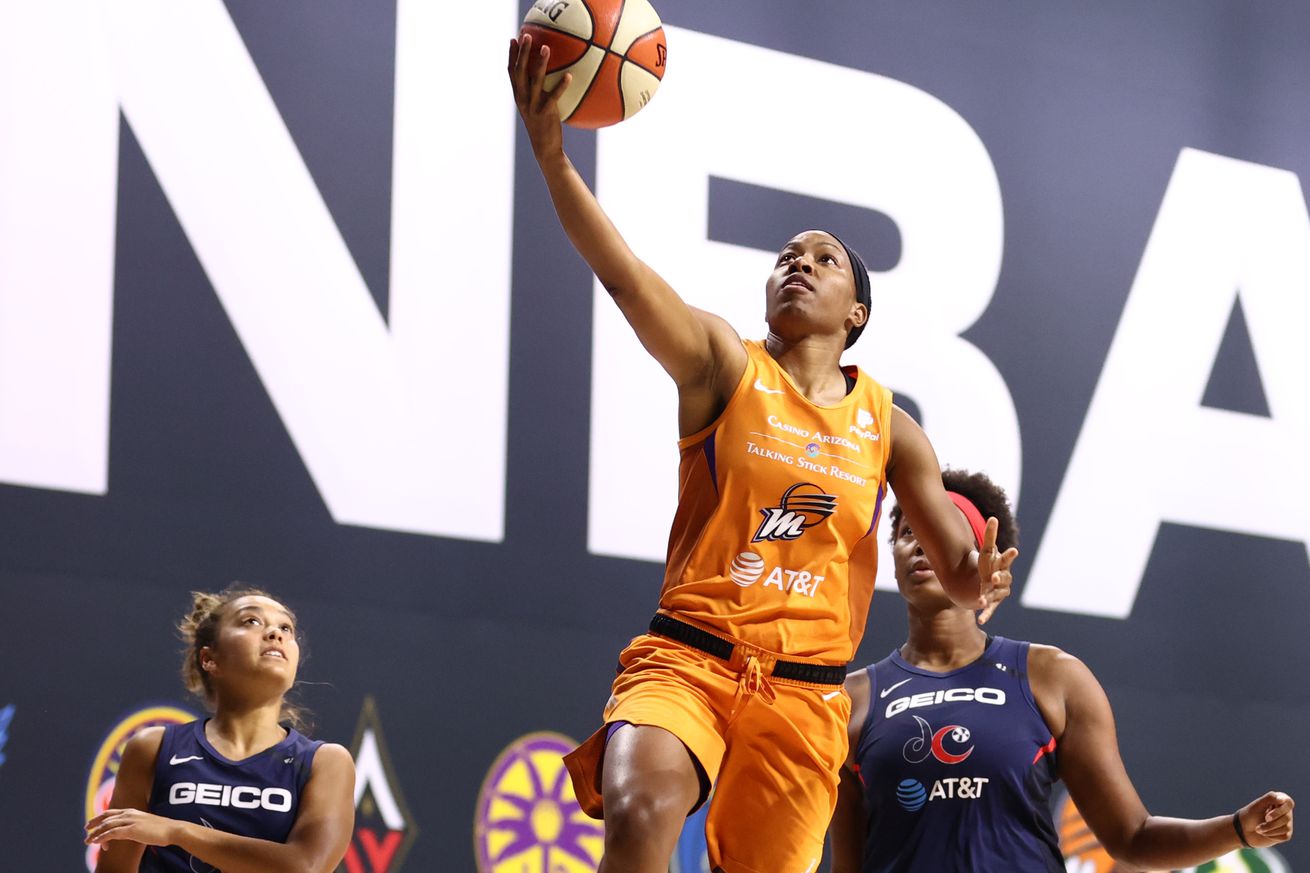 Shey Peddy (with ball) gave the Phoenix Mercury a buzzer-beating win Tuesday night against the her former team and the defending champion Washington Mystics. | Photo by Ned Dishman/NBAE via Getty Images

After being waived by the Washington Mystics midseason, Shey Peddy knocked down a last-second dagger to give the Phoenix Mercury a first-round win over her former team. The Connecticut Sun advanced to the next round with a comfortable win over the Chicago Sky on Alyssa Thomas’ big night.

Shey Peddy hit a 3-point buzzer-beater to carry the No. 5 Phoenix Mercury past the No. 8 Washington Mystics and Alyssa Thomas’ near-triple-double led the No. 7 Connecticut Sun to victory over the No. 6 Chicago Sky in the first round of the 2020 WNBA Playoffs on Tuesday night at IMG Academy in Bradenton, Florida.

While Peddy and Thomas were the clear-cut stars of the evening, the Mercury’s Skylar Diggins-Smith and Diana Taurasi and DeWanna Bonner of the Sun each scored 20-plus points for their squads.

The Sky, who finished the regular season two games ahead of the Sun, were felled by the unsurprising dominance of Thomas and Bonner.

The Mercury, who finished the regular season four games ahead of the defending champions, were expected to take care of business. Instead, they trailed for most of the game, giving the Mystics the edge. Phoenix caught fire in the fourth quarter and overtook them in the final moment.

Shey Peddy was waived by the Mystics on Aug. 17 and later signed with the Mercury. The reserve guard increased her playing time with Phoenix, but nobody expected her to make a game-winning 3-pointer at the buzzer to defeat her former team in the first round of the playoffs.

On the game’s final possession, the Mystics stopped Diggins-Smith from driving to the basket for a 2-pointer that would have tied the game. Diggins-Smith, a high-IQ guard, made a great pass to a wide-open Peddy in the right corner. Washington’s Leilani Mitchell, who had been hot from 3-point range all game, had missed one of two free throws on the previous possession, allowing Phoenix to walk away with the victory instead of forcing overtime.

Diggins-Smith led the Mercury with 24 points and Mitchell scored a game-high 25 for the Mystics. Diana Taurasi chipped in 23 points for Phoenix and Peddy and Kia Vaughn each had 12.

Vaughn hit two crucial midrange shots in the middle of a 17-0 Mercury run in the fourth. Washington led by 11 at the break.

Phoenix avoided major disappointment by winning and becoming one of six teams left standing. The Mercury will now take on the No. 4 Minnesota Lynx at 7 p.m. ET on Thursday (ESPN2).

The Mercury and Lynx split their regular-season series 1-1.

The defending champion Mystics were 9-13 in the regular season and should be commended for making the playoffs without Elena Delle Donne, Tina Charles, Natasha Cloud or LaToya Sanders. When those four suit up in 2021, the Mystics will likely return to the top of the league once again.

In the first game of the evening, Alyssa Thomas stole the show with 28 points, 13 rebounds and eight assists. There have only been nine triple-doubles in WNBA history and just one — Sheryl Swoopes’ 14 points, 10 rebounds and 10 assists on Sept. 3, 2005 — occurred in the playoffs.

Thomas may not have a triple-double in a WNBA uniform yet, but she has threatened to notch one many times. Continuing her superb play to help the Sun to the first-round win, she seems to have picked up where she left off in the 2019 Finals.

Connecticut and Chicago were tied 41-41 at halftime, but Connecticut used a 27-11 third quarter to pull away.

As expected, Chicago out-shot Connecticut from the field and from the 3-point line but lost the rebounding battle 40-21; the Sky also made 14 fewer free throws. Although unsurprising to see the Sun get to the free-throw line, their 93.1-percent (27-of-29) conversion of extra shots was; the Sun were a league-last 75.5-percent shooting from the charity stripe in the regular season. Thomas, who has torn labra in both shoulders, shot 68.6 percent during the regular season, but went 8-of-9 on Tuesday.

Bonner backed up Thomas with 23 points and 12 rebounds while Allie Quigley paced Chicago with 19 points.

The Sun advance to play the No. 3 Los Angeles Sparks at 9 p.m. ET on Thursday (ESPN2) in a rematch of the 2019 semifinals, a series Connecticut swept. The Sparks, however, swept the Sun in the 2020 regular season.

The Sky lost key players Diamond DeShields and Azurá Stevens late in the season. With those two reuniting with Quigley, Courtney Vandersloot, Kahleah Copper and possibly free agent Cheyenne Parker, the Sky have a chance to stay a dominant, contending team.